Looks like we have no option, but to go with the 9-HPT as our primary outcome. #ThinkHand #ResearchSpeak #MSBlog

As you know we are planning to do a trial in people with more advanced-worsening MS and to include people who are already in wheelchairs. The aim of the study is to see if we can slow down worsening, or loss of function, in the arms and hands. We are planning to do a phase 2, proof-of-concept study, but some commentators are saying to us: ‘Why waste your time? Just go straight to Phase 3’. We now know a lot about how to power trials in worsening-advanced MS, formerly known as secondary and primary progressive MS or chronic progressive MS. We have two drugs that have recently been shown to be effective in this stage of the disease (ocrelizumab and siponimod). If we do a phase 3 trial what primary outcome measure would we use? We have the most experience, and supporting data, for the 9-hole peg test (9HPT) and importantly it has been shown to have face validity from linking it to changes as measured using the ABILHAND patient related outcome measure (PRO or PROM) in the ASCEND Trial (natalizumab in SPMS). The problem with the 9-HPT is that it has quite a lot of variability with test-retest results. The study below addresses this problem and assesses using the 9HPT as it would be used in a clinical trial. They show the variation in the 9HPT retest results a week apart to be acceptable for a clinical trial.

What is hidden in the analysis below is the the results of the 9HPT at each time point represent the average of two tests per hand. When you compare these results with each other, i.e. test-1 vs. test-2, we have found the coefficients of variation to be much higher. The good news is that we have been told that the regulators, at least the FDA, will accept the 9HPT as a primary outcome in a clinical trial. The question is would the EMA be as accommodating and will we need to do two trials rather our planned one trial?

The other big decision we need to make is what drug to use in this group of people with MS? People with more advanced-worsening MS often have associated comorbidities that would make them susceptible to complications of long-term immunosuppression, for example bladder infections. Therefore we need to choose a drug that does not affect innate immunity. Ideally, we would also like a drug that penetrated the CNS to target intrathecal cells, in particular B-cells and plasma cells, and we would like a drug that is easy to administer and has low monitoring requirements. We would also want the drug to be a high-efficacy drug to give us the best chance of having a positive outcome. Any suggestions, or guesses, on what drug(s) we are thinking of using in this trial? 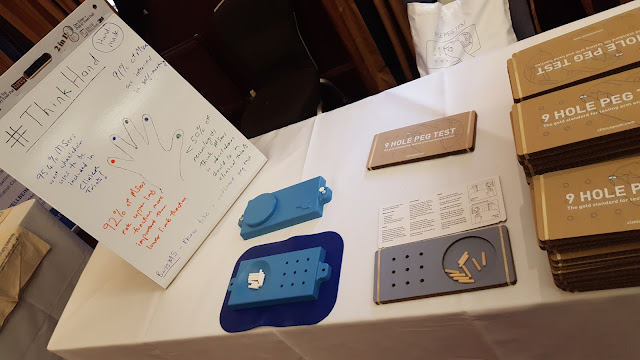 We have developed a cheap, environmentally friendly, cardboard 9HPT for home use (c9HPT). We were hoping to make the c9HPT available online for purchase last year, but have had to delay the launch of the online portal to get the test CE-marked. According the the MHRA the 9HPT is a device and hence we can’t distribute it or sell it unless we have it CE-marked. The good news is that the cHPT has now been CE-marked and we should be launching it officially very shortly. We have also updated our www.clinicspeak.com web-portal to accommodate the c9HPT. Please  note we are promoting the c9HPT as a self-monitoring tool.

Background: This study evaluated the reliability, precision, and clinically important change of the Nine-Hole Peg Test (9-HPT) over a 1-week period.

Methods: Sixty-nine patients with multiple sclerosis completed the 9-HPT on two occasions 1 week apart. Test-retest reliability was based on intraclass correlation coefficient, and precision was based on standard error of measurement and coefficient of variation. Clinically important change was based on the minimal detectable change.

Conclusions: These data provide evidence on reliability, precision, and clinically important change of the 9-HPT over a 1-week period in multiple sclerosis for clinicians and researchers.

CoI: multiple, Biogen kindly provide an unrestricted grant for the design and initial production of the c9HPT.