A person with MS from Spain emailed me last week asking for advice. I assume he is on natalizumab and is JCV seropositive and is at risk of developing PML (progressive multifocal leukoencephalopathy) as a complication of his treatment. His neurologist has offered him a choice of dimethyl fumarate (DMF, Tecfidera) or fingolimod (Gilenya). He is however very concerned about the risk of PML on both of these options; the PML figures his neurologist gave him in relation to the number of cases of PML on both of these DMTs are very different to figures he found when searching online. He emailed me to find out which figures are correct.


Biogen informed me a few weeks ago that a 5th case of PML had been reported on Tecfidera and that last case had had lymphopaenia with only one total lymphocyte count below 500/mm3 (0.5×109/L). Similarly, in December Novartis informed the MS community of the 9th case of PML on Gilenya unrelated to previous natalizumab exposure. I was therefore surprised when this patient referred me to the European database of suspected adverse drug reaction reports. 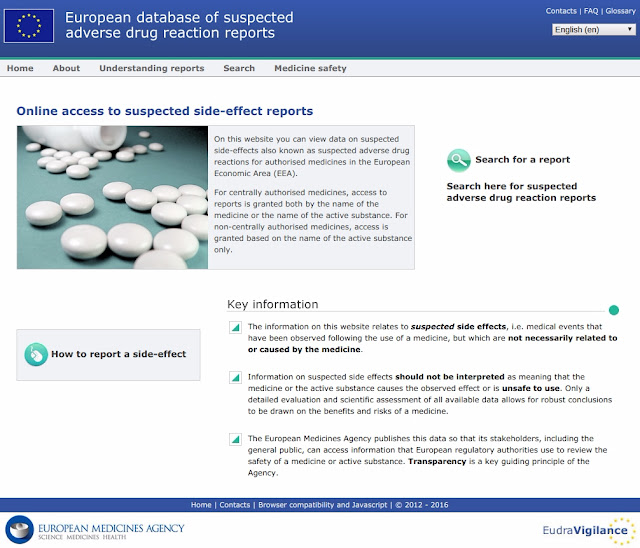 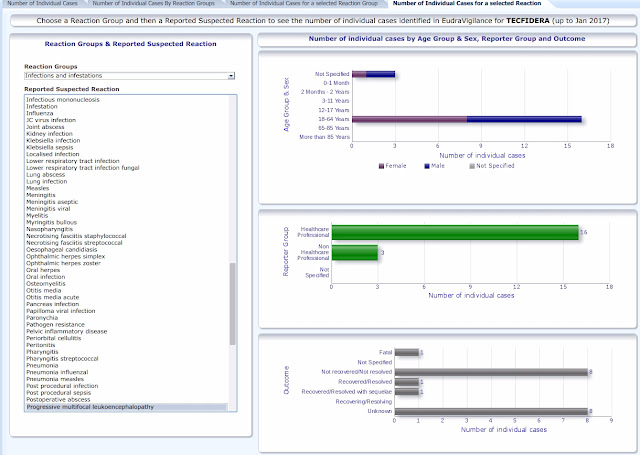 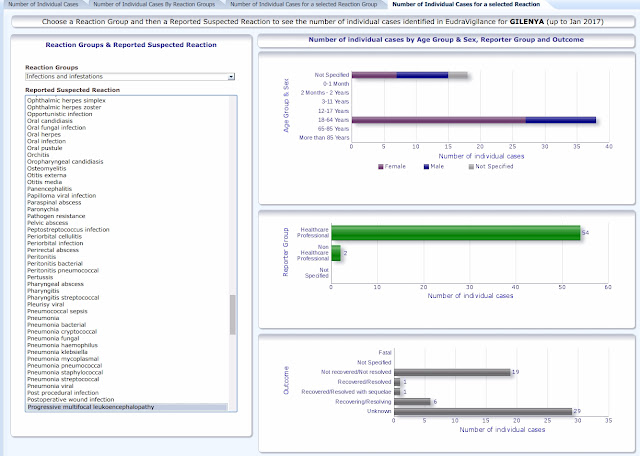 
Please note that European database of suspected adverse drug reaction reports is an official website. All the data displayed in the web reports is taken from EudraVigilance, a system designed for collecting reports of suspected side effects, used for evaluating the benefits and risks of medicines during their development and monitoring their safety following their authorisation in the European Economic Area (EEA).

The following is a list of important facts about the source of the data you can view on this website for each web report:

I was as confused as this Spanish person with MS who simply wanted to know the risk of PML on DMF and/or Fingolimod. The clarifications below are very helpful. The EudraVigilance figures are a crude indicator of an adverse event on a particular drug, but the numbers cannot be used to calculate incidences.

I have now had a formal response from Novartis. The EMA, or EudraVigilance, figures are essentially from two sources. One from EU members states and the other from Novartis. The Novartis figures are global figures. The numbers in the EudraVigilance database are both suspected, and confirmed, cases of PML and as expected some of them will turn-out not to have PML and some will be duplicate entries. Novartis provide the EMA with information about whether or not the cases are associated with, or without, the previous use of natalizumab.

The following are Novartis’ official and latest figures:

The overall rate of PML under fingolimod therapy not attributed to previous natalizumab treatment is very rare and estimated to be less than 1:10,000 patients.

Nine patients were within the age range of 49 to 63 years, while one patient was 32 years old.

In nine cases, fingolimod exposure ranged between 30 and 54 months, while one received fingolimod for 18 months.

None of the patients had sustained grade 4 lymphopenia.