The response to therapy may provide useful clues about what causes MS.  So maybe we should have a look. Its all T cells, but what happens with ocrelizumab


However, these is no consistency of what works and what does not work.


Daclizimab is moderately effective at controling MS, but may not instantly fall into the easy to understand explanation.


Many People believe that MS is mediated by T cells


Interleukin 2 is a T cell growth factor that is used to make T cell divide. Block the CD25 and this will stop T cells dividing and stops them becoming activated. No activation of T cells no MS. 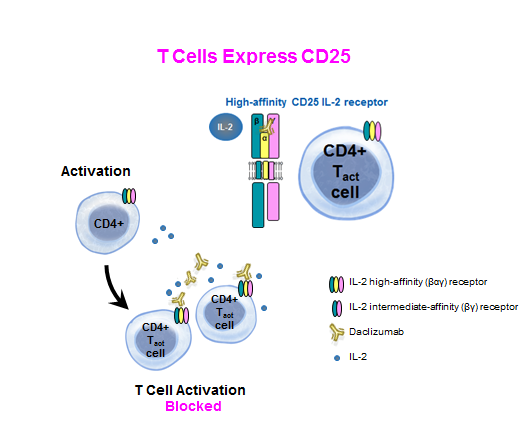 
However, the explanation used to describe the efficacy is different 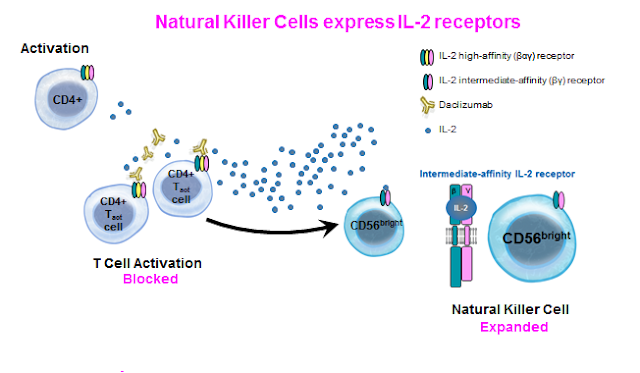 Natural Killer cells are part of the innate system and are good at killing cancers and infections, so is this why it works because NK cells are killing the MS-virus (EBV) infection.


This is a favoured idea by ProfG to fit with his EBV hypothesis and the Charcot Project.


However, there are other explanations

The B cell Explanation


Whilst activated T cells express CD25, B cells also express CD25, notably in B memory cells (CD19+, CD27+) and with dacliziumab treatment not only are T cells depleted but B cells are depleted too. In the study below in the right hand set of graphs in the bottom left is the effect on B cell numbers and you can see it dropps by about a half, in studies not in MS the CD19 population is depleted between 50-75%. So is this the explanation how MS works?

However, one thing it suggests is not quite right is the


Based on many, many EAE studies, it is suggested that autoimmunity is controlled by T regulatory cells (Tregs).


Get rid of them and autoimmunity should get worse, as is reported over and over again in EAE.


However this is not true in the case of MS. The Treg also express CD25 (and Fox3P) and are depleted yet MS gets better in most people, so this mechanism suggested by the T cell immunologists does not hold water.


Can this be ignored?

However maybe autoimmunity is augmented rather than it affecting MS, it appears daclizumab induces autoimmune-related skin problems that can be severe in some people.