BACKGROUND: B lymphocytes are thought to play a relevant role in multiple sclerosis (MS) pathology. The in vivo analysis of intrathecally produced B cell-related cytokines may help to clarify the mechanisms of B cell recruitment and immunoglobulin production within the central nervous system (CNS) in MS.
METHODS: Paired cerebrospinal fluid (CSF) and serum specimens from 40 clinically isolated syndrome suggestive of MS or early-onset relapsing-remitting MS patients (CIS/eRRMS) and 17 healthy controls (HC) were analyzed for the intrathecal synthesis of IgG CXCL13, BAFF, and IL-21. 3D-FLAIR, 3D-DIR, and 3D-T1 MRI sequences were applied to evaluate white matter (WM) and gray matter (GM) lesions and global cortical thickness (gCTh).
RESULTS: Compared to HC, CIS/eRRMS having oligoclonal bands had higher intrathecal IgG indexes (p < 0.01), lower values of BAFF Index (11.9 ± 6.1 vs 17.5 ± 5.2, p < 0.01), and higher CSF CXCL13 levels (27.7 ± 33.5 vs 0.9 ± 1.5, p < 0.005). In these patients, BAFF Index but not CSF CXCL13 levels inversely correlated with the intrathecal IgG synthesis (r > 0.5 and p < 0.05 for all correlations). CSF leukocyte counts correlated to CSF CXCL13 concentrations (r 0.77, p < 0.001). The cortical thickness was significantly lower in patients with higher CSF CXCL13 levels (2.41 ± 0.1 vs 2.49 ± 0.1 mm, p < 0.05). CONCLUSIONS: The intrathecal IgG synthesis inversely correlated with BAFF Index and showed no correlation with CSF CXCL13. These findings seem to indicate that intrathecally synthesized IgG are produced by long-term PCs that have entered the CNS from the peripheral blood, rather than produced by PCs developed in the meningeal follicle-like structures (FLS). In this study, CXCL13 identifies a subgroup of MS patients characterized by higher leucocyte counts in the CSF and early evidence of cortical thinning, further suggesting a role for this chemokine as a possible marker of disease severity. 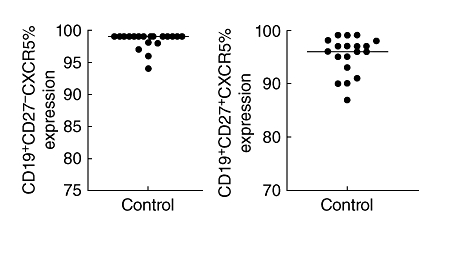 CXCL13 is a small cytokine belonging to the CXC chemokine family. This is selectively chemotactic for B cells expressing CXCR5 receptor, which is most of them. So it will attract memory B cells into the brain. So in early MS you produce molecules that can get B cells into the brain and the more you produce the more the cells that enter the brain and this is associated with more damage to the brain seen by thinning of the cortex (outside layer of the brain). Increases in MS have been seen with this chemokine before to correlate with cell numbers an in contrast to this study…antibody levels

Antibody levels were found to inversely correlate with BAFF so as you had more BAFF you had less antibody response.

BAFF is B cell factor involved in the growth of B cells, notably in makes immature B cells replicate and in is also a growth factor for plasma cells. In this study they found that in MS there were lower levels of BAFF in the spinal fluid.  This is not new because the same authors have published this before.

In the blood you can find BAAF and this was increased if you treated MS with beta interferon (Kannel et al. 2015) and with rituximab as we showed. The effects of intrathecal rituximab on biomarkers in multiple sclerosis.Mult Scler Relat Disord. 2016 Mar;6:49-53.

If you block BAFF it will cause less BAFF and MS gets worse.
Blocking BAFF decreases mature B cells and plasma cells so maybe its not them in the blood at least. However it increases memory B cells


What does this tell us about MS?