We made a suggestion that the B memory cell was important in MS.


However, the reviewer was spitting blood that we did not mention T cells enough times and thought that the review was a bit biased.


Sure it has biased…as it is any opinion piece. If we did not take a stance, it could become a love-in and we would say everything is because of T cells…..no-one would bat an eyelid and we would keep on developing T cell treatments that have been pretty poor at controlling MS, but very good at treating EAE.


There were more than enough references compared to the 75 limit and to give a T cell-centric opinion on all treatments to appease someone, who frankly was never going to listen, or change or question their own pre-conceptions.


Sure all MS drugs affect T cells in some way, but we need to be abit more specific than that,  as we know that the level of CD4 and CD8 depletion does not associate with relapses.


However, we believe that the disease causing cells must be antigen activated (i.e. in the primed CD45RO positive) T cell pool.


However to make the referee happier we should have gone through the treatments one by one, to do the same type of search that we did to look for memory B cell activity, as we were asked to do by a blogger.


Therefore, we took the view that the T cells harboring the pathogenic cells would be in the CD4 or CD8 population that express CD45RO (a memory marker) and do not express CD45RA (antigen-inexpertienced cell marker) or CD62L (an adhesion molecule involved in getting cells into the lymph nodes) but express high levels of CD44 (to get the T cells into tissues including the brain.


We then went through the current MS drugs and see how blood levels correlate with the idea that MS is associated with effector memory T cell levles.  We searched on the “name of the drug” and “CD45RO/memory T cell” just like we had searched on “CD27/memory B cell”.


The search revealed a positive correlation of B memory cell function with all MS drugs and was this was most clear in the highly active DMT.


Sure these drugs can affect T cells, but what about effects on the memory cells.

Want to look at the data yourself, here you go!


One of many, many references. Where is the contradiction?

There are a few T cells that get depleted, but the T cell population doesn’t go down enough to suggest there was any effect of the memory T cell subset. So no direct effect on T cells can be linked to T cell number…Next

CD49d-Natalizumab-NO
Expect increase of in memory T cells as trapped in blood if important.
No effect. Next!

Mitoxantrone-NO
Expect decrease in memory T cells if important. If fact most T cells are not affected. Its not bad at killing B cells though. Next.

Fingolimod-NO Expect decrease in memory T cells if important
As we would expect the cells expressing CCR7 are trapped in the lymph glands and the effector memory population increases. So the T cell idea is not very compelling when looking in the bloods of people treated with the highly active drugs.

What if we look at the moderately effective DMT. 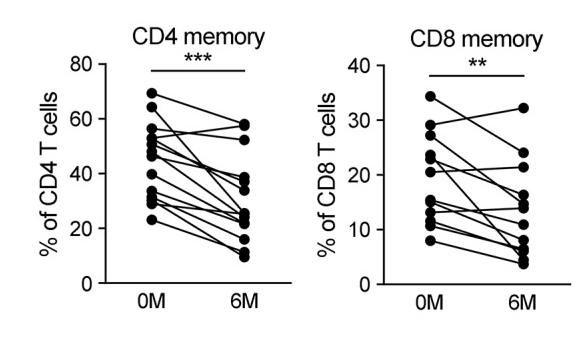 Daclizumab-MARGINAL
Expect decrease in memory T cells if important. Looks like not much and mainly in the no camp.

Lanio N, Sarmiento E, Gallego A, Navarro J, Palomo J, Fernandez-Yañez J, Ruiz M, Fernandez-Cruz E, Carbone J. Kinetics of functionally distinct T-lymphocyte subsets in heart transplant recipients after induction therapy with anti-CD25 monoclonal antibodies. Transpl Immunol. 2013;28(4):176-82.
This is not MS, The data is probably tucked away in ECTRIMS poster, never to see the light of day, I only served abstracts and may have missed it
Beta Interferon-YES
Expect decrease in memory T cells if important. Refreshing to know that beta interferon supports the view What does it do in EAE?-Not quite sure but data suggests it makes it better, so not in MS

The hypothesis was that BAFF makes autoimmunity worse and makes a Th1 response. A transgenic mouse making BAFF made more Th17 and EAE was a little worse, where as BAFF knockout mice made fewer Th17 and was a little better and got EAE despite having no B cells. So problem when you do experiment, before you know the result, you don’t always get what happens in MS.

Next follow-up and TACI-Ig (atacicept) causes a decrease in Th1 and Th17, so wrong way to explain MS result using a Th1/Th17 idea but low and behold there was an increase in memory T cells.

So if I presented this to the referee as the other half of the story would they buy it?


Would they block the B cells stuff to Ensure the T cell stuff is never read?


Would it have been worth the extra few references?


What references do we need to add contradict this view?

Would someone publish this?


Would the referee accept that their bubble bursts?

More on this tomorrow.