Papers are getting assessed on altmetrics and one of the outputs are blog posts, so anyone who has clicked on the altmetric link to get here you are in for a shock….read on

Placental derived mesenchymal stem cells (PMSCs) have been suggested as a possible source of cells to treat multiple sclerosis (MS) due to their immunomodulatory functions, lack of ethical concerns, and potential to differentiate into neurons and oligodendrocytes. To investigate whether PMSCs share similar characteristics with embryonic mesenchymal stem cells (EMSCs), and if transplanted PMSCs have the ability to integrate and replace degenerated neural cells, we transplanted rat PMSCs and EMSCs into the central nervous system (CNS) of Lewis rats with experimental autoimmune encephalomyelitis (EAE), an animal model of MS. Our findings demonstrated that transplanted PMSCs, similar to EMSCs, were effective in decreasing infiltrating inflammatory cells, preserving axons, and ameliorating demyelination, thereby improving the neurological functions of animals. Moreover, both PMSCs and EMSCs had the ability to migrate into inflamed tissues and express neural-glial lineage markers. These findings suggest that PMSCs may replace EMSCs as a source of cells in MS stem cell therapy.

The blog is a site that allows us to talk about research, and some of it is good news and some is bad news. We hope some of the readers are scientists and neurologists as we feel it has educational content for all..but also we need to educate the public about the type of things scientists do.

We can do the rose-coloured tinted glasses approach, which you get in most Science websites where every thing is great. But if every thing was great, we would have cured something by now.

As a card carrying vivisectionist,  we have to take the flank from parts of Society that do not like or want animal experiments. However, the UK Government want us to be open about working with animals, and this is why we post on animal studies.


I have decided against doing “cure of the week” which happens every week as I realize many animal studies are years away from offering something of use.

If you poll pwMS about where we should be putting their research resources?. I bet high on the list will be people wanting stem cell trials.


This is because science has promised that we can reverse the effects of time, and the media and public have bought into this view, so you rightly say trials, trials, trials!

Indeed the MS Societies listen and put their resource behind their members wishes. Trials have been initiated and everybody’s hopes are high. The hope you are being sold is that the stems cells turn into myelinating cells and new nerves and then we can turn back time.

Everyone gets on the band wagon, and even we dipped our toe in the stem-cell waters.

I know you like to hear about this stuff, but I need to put this into perspective, because if the stem cells trials don’t work you will be blaming the animals…..Don’t!

So to describe the paper in this study creates mesencyhmal stem cells from embryos and placenta and show that they inhibit EAE and stop demyelination and nerve loss when transplanted into the brain.

However, how many more of these studies are we going to see?

MSC made from this or that cell.


I wonder whether we should call time?

There have been endless studies of mesenchymal stem cells and EAE. The results are remarkedly consistent (As seen below, from this study). 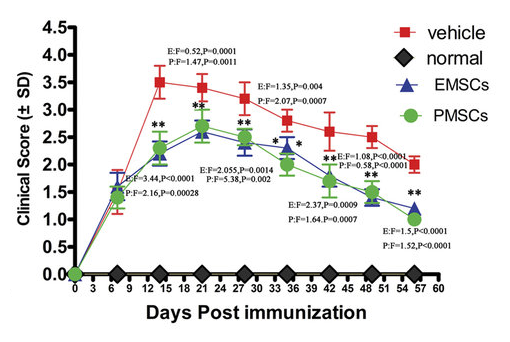 The effects are pretty uninspiring.

The benefit is a small diminution, and sometimes a delay, due to a small inhibitory effect. Perhaps much of the benefit of demyelination and nerve loss reported can be then be downstream of this, because the damaging inflammatory response has not arrived in the CNS to cause damage.

It is often impossible to work out if it was in fact a diminution of the severity of disease or was it because a few animals in the experiment didn’t get disease.


I maintain that we need to see this data.

However, this minor effect in the most optimum of conditions can easily be bettered by most current DMT.

If this is good as it gets, then the chances of this being useful in MS is really rather dubious.


If all they really do is have an immunosuppressive action then is this the way to go?.

I’m yet to be convinced.

However, do we need these types of study? Mesenchymal trials in humans are well underway.

The success or failure of trials in humans will determine whether this approach is developed or not.

It will probably be safe, but will it work?….I suspect something towards a failure or something wishy-washy as the trials are based on data made of quick-sand.


Remember this is an opinion and I could be wrong.

Trials in humans are done due to opportunity and public pressure, where we are running before we can walk. How do we guide the mesencymal cells to become oligodedrocytes etc, can they do anything when given systemically? Do they really convert into useful cells? (answer in animals is generally no), there are so many unknowns. This means that the chance of success are slim.

I am there to be proved wrong and then I will eat humble pie when I am.. I don’t mean to dash hopes. Stem cells do have potentials


Am I wrong to be a cynic? and burst some bubbles or should I have a rant and say “Not in my name”

I have to justify what I do, but I am not going to defend all the work of others and this paper happened to come into my firing line.

Am I sorry for doing this in public…No.
The 3Rs of animal use is supposed to a core principle of working with animals in Europe.

In the experiment above, there is a group where experiment healthy animals are followed and show nothing. They, are sometimes injected with adjuvants that serve essentially no useful function excepts it wastes animals. It is no longer an experiment, we know it is not going to induce neurological signs…stop it!

Next up, For anyone reading this study, the method of disease induction and method of killing are no longer allowed in the UK.

To kill animals they chop their heads off.

This is not worse thing…a Japanese person once said they throw rats into liquid nitrogen to freeze the brain quickly….non-sense it would not be the quickest way of doing it!- This was stupidity and animal abuse

Anyway “This technique should only be used in rare circumstances and where there is exceptional scientific justification” The animals must be dead before being decapitated. (https://www.nc3rs.org.uk/rat-schedule-1-stunning-followed-decapitation-terminal).

However, if you call people on things does it make them hide the truth.

In the study they only state they inject the adjuvant subcutaneoulsly, but where is this?

I guessed they have been rejected for saying where, so they don’t say it. However, they give a reference  which says the same thing and gives a reference from the yesteryear and it states that the adjuvant is put subcutaneous in the feet.

This practice was likewise outlawed in the UK over twenty-25 years ago as being inhumane, as putting the adjuvant into the feet you get swelling and so pain and the animal has problems walking. This can be put under lose skin and this does not seem to cause the animals the same problem. Therefore, the foot pad injection has no place in science, at least in EAE science. Maybe they did not do this, they selected the wrong references


I personally refuse to accept this work if they do use injection in feet, it is bad science.This is the way to make people change practise..maybe not they just hide things:-).


It is obvious there are some people that do not care about this and they are based in prominent countries that should know better!

This is perhaps what happens when you move your research to places, where they do not give a stuff about the beasties they work with. Remember this,  as UK science based on animals closes down

Perhaps it is about time that Journals state producing a list of procedures that they will not accept on ethical grounds.


Yes, EAE will eventually end up there, but if we continue to undertake bad practices then we will hasten this process and so a good reason to speak out…the animals can’t


However, killing off animal work in the UK is going to mean that you get more of this guff.


Some people out there will be saying shut you whining minnie,