Severe rebound after withdrawal of fingolimod treatment in patients with multiple sclerosis.

Fingolimod (FTY) is the first oral medication approved for multiple sclerosis therapy. Until now, little has been known about the effects of FTY withdrawal regarding disease activity and development of tumefactive demyelinating lesions (TDLs), as already described in patients who discontinue natalizumab.

In this study we present the clinical and radiological findings of two patients who had a severe rebound after FTY withdrawal and compare these with patients identified by a PubMed data bank analysis using the search term ‘fingolimod rebound’. In total, 10 patients, of whom three developed TDLs, are presented.

We propose that a good therapeutic response to FTY might be predisposing for a severe rebound after withdrawal. Consequently, therapy switches should be planned carefully with a short therapy free interval. 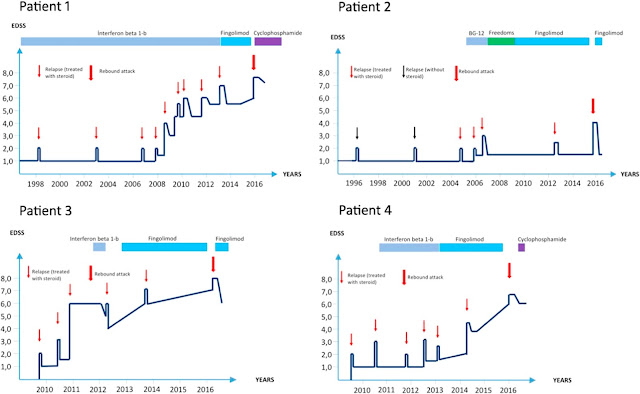 Figure 1: From Gunduz et al. Note the relapses after cessation of fingolimod treatment.

In a rush to get therapies licensed, the collective ‘we’ have overlooked potentially devastating side effects of treatments, assimilating resistance by repetitive preeching. Can we ever get this right?

In this case, rebound of MS disease activity on treatment withdrawal, and in some cases the end result is worse than the original disease. Not only this, you are also then committed to buying into possibly life-long immunosuppression in order to avoid the possibility of rebound (and one with a “short therapy free interval”). En face, rebound doesn’t sound as serious as say PML, but it can still result in great disability, even if your disability score states that you have progressive MS and may not benefit immunomodulatory treatment (see Figure 1)!

I’ve been pondering this for a while…

Both natalizumab and fingolimod are gating mechanisms; one holding back the immune system from entering the brain (natalizumab), the other sequestering them in lymph nodes (fingolimod). In the same way that there is flooding during extreme river flows, the release in the tight hold on the immune system leads to rebound. With fingolimod, animal data suggests that there is a rapid increase in the receptor number (sphingosine 1 phosphate) that is blocked by fingolimod on T cells after stopping treatment. This is then followed by an immediate efflux of self-reactive T cells from the lymph nodes that quickly enter the brain.

It may therefore not be wise to cycle from natalizumab to fingolimod, or to be on fingolimod for too long. The key may be to cycle through treatments over short periods, i.e. keep the immune system guessing. As far as I’m aware this has not been suggested before, and as such have no evidence to support this statement. But, we may in the future, start writing treatment plans for the next five years for PwMS if this is demonstrated to work!