Some body asked me to comment on this paper.

Multiple sclerosis (MS) is an autoimmune inflammatory demyelinating disease of the CNS that causes disability in young adults as a result of the irreversible accumulation of neurological deficits. Although there are potent disease-modifying agents for its initial relapsing-remitting phase, these therapies show limited efficacy in secondary progressive MS (SPMS). Thus, there is an unmet clinical need for the identification of disease mechanisms and potential therapeutic approaches for SPMS. Here, we show that the sphingosine 1-phosphate receptor (S1PR) modulator fingolimod (FTY720) ameliorated chronic progressive experimental autoimmune encephalomyelitis in nonobese diabetic mice, an experimental model that resembles several aspects of SPMS, including neurodegeneration and disease progression driven by the innate immune response in the CNS. Indeed, S1PR modulation by FTY720 in murine and human astrocytes suppressed neurodegeneration-promoting mechanisms mediated by astrocytes, microglia, and CNS-infiltrating proinflammatory monocytes. Genome-wide studies showed that FTY720 suppresses transcriptional programs associated with the promotion of disease progression by astrocytes. The study of the molecular mechanisms controlling these transcriptional modules may open new avenues for the development of therapeutic strategies for progressive MS.

I said that I was reluctant to do this…..The human data is out there for every one to see.

However, it did reach the news and so here is my take, which you asked for.

I’ve been told I have been abit grumpy. Maybe I should enthuse more, but research is about questioning

If you are not interested in understanding science papers and their problems, then this is not for you.

If you think every thing in science is clear cut then read on… as we make black and white become grey.

For science readers it is food for thought.

In the above paper they say “Following immunization……NOD (non-obese diabetic) mice initially develop an acute neurological event, which is followed by a chronic progressive phase that starts at approximately day 25” 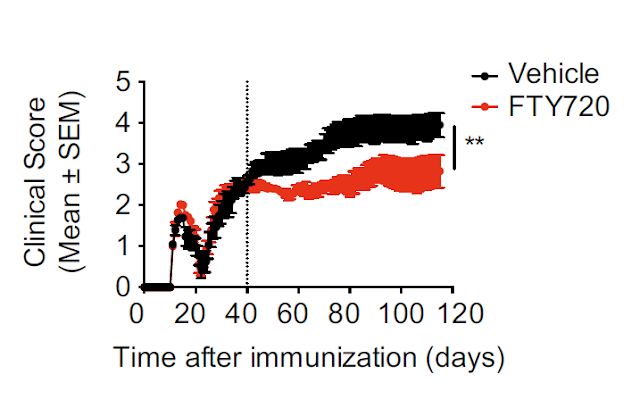 Then the study looks at the effect of the drug on isolated astrocytes and importantly human astrocytes and finds a number of pro-inflammatory genes down regulated, some are upregulated like IL-10 and neurotoxicity goes down, through blockade of one of the central transcription factors controlling inflammatory signalling.
So they suggest that fingolimod is going to protect nerves and fingolimod will stop secondary progressive MS.

It is however pointed out that fingolimod actually failed to affect primary progressive MS, but there was some effect in secondary progressive MS with siponimod. This study sponsored by Novartis, makes it look promising. Maybe Siponimod works via blocking astrocytes

However, whilst the message in the paper is crystal clear, the supporting EAE is perhaps not quite as clear cut as it seems.

We have a read round the subject because if this study highlights a quick way to find treatments for progressive MS, we need to be doing this.

However, NOD mice develop diabetes and so are classed as a harmful mutants, creating more problems to use them. Generally however the adjuvants used to cause EAE, block NOD mice from becoming diabetic. Anyway back to the study.

First thing to be said, in contrast to the suggestion tin the paper, there were studies looking at chronic EAE, years before this current report.

It was not mentioned…wonder why I get grumpy:-)

In a similar experiment in ABH mice treated with fingolimod, there was a marked effect on disease with treated animals. So the results look the similar but perhaps the treatment effect was much more marked. 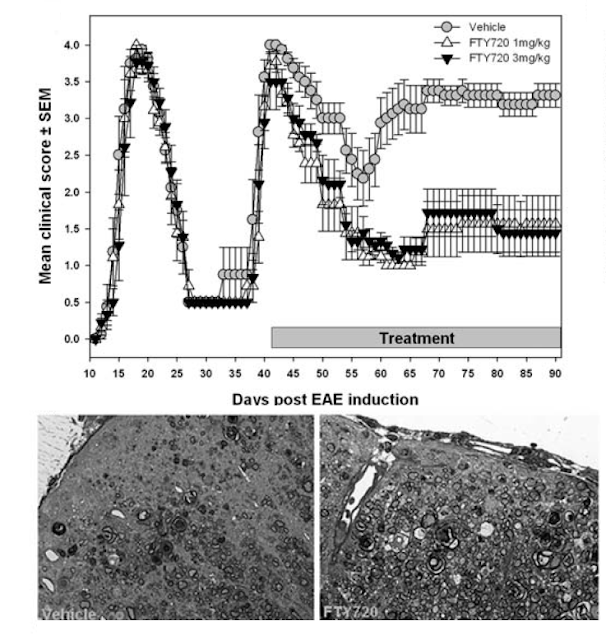 There was less nerve damage and less myelin loss, however              the interpretation was somewhat different.

It was not that this was about astrocytes, they were not looked at, but it was that fingolimod was blocking relapses.

This is because the model in relapsing progressive, where relapses occur but animals recover with increasing deficit. The relapses burn out after 3-4 attacks and you get a very slow worsening of disease (secondary progression starting months after disease onset) that does not respond to T cell inhibition and incidentally did not respond to fingolimod treatment, so suggesting that fingolimod may fail in progressive MS, which it was subsequently shown to do.


ProfG has mentioned the importance of “Thinkhand” as a treatment option and has reported that ocrelizumab and natalizumab have protected hand function in the none hole peg test. However the trials with S1P1 modulators have not reported effects on hand function. Why not?


It must tell us something but what?

Anyway in the first study (above) the beasties were treated from day 40 and “FTY720 ameliorated progressive NOD EAE without significant effects on the peripheral T-cell response”.  So we have a difference in World View.


However, this was measured by monitoring T cell responses from the spleen. However, as the response of the drug is to keep cells in lymphoid organs, would we be expecting a decrease in T cell function..maybe if we looked at the blood there may had been an effect. However the inference is clear this is workig via blockade of astrocytes and not T cells

However, we need to look at the history of the generation of the progressive model.

We studied EAE in NOD mice many years ago, where it was clear that this was a low-EAE susceptibly strain
Genetic analysis of experimental allergic encephalomyelitis in mice. Baker D, Rosenwasser OA, O’Neill JK, Turk JL. J Immunol. 1995;155(8):4046-51.

We also showed that the mice would respond to MOG.

The NOD mice and ABH mice share a transplantation antigen called H-2Ag7 that is used to recognise the myelin oligodendrocyte glycoprotein. The MOG 35-55 epitope is a minor disease causing epitope. Similar it may not be the major target in C57BL/6 mice (type of mouse) either.

Anyway back to NOD mouse EAE and the suggestion that is a progressive EAE model. 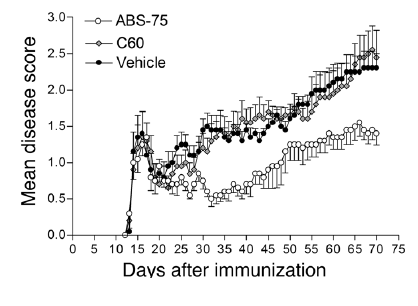 They said when 10-week-old NOD mice were immunized with MOG35–55 …, the first signs of disease appeared at days 11–12 (peaking at days 16–18), and after partial recovery from this initial acute attack, there was a progressively worsening relapse without full remission. This was then followed by a secondary progressive course characterized by chronic clinical impairment.


The implication is that the worsening occurs progressively from day 25 onwards.

This was also reported in another study. But in this case, disease was treated with myelin (MOG) to block the T cell immune response. 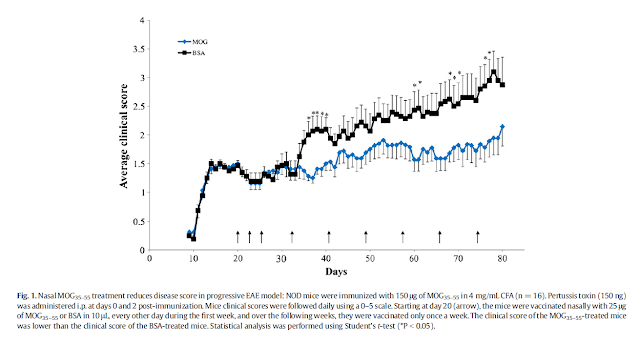 Now let’s look at the line graph. Here’s one of ours (below) 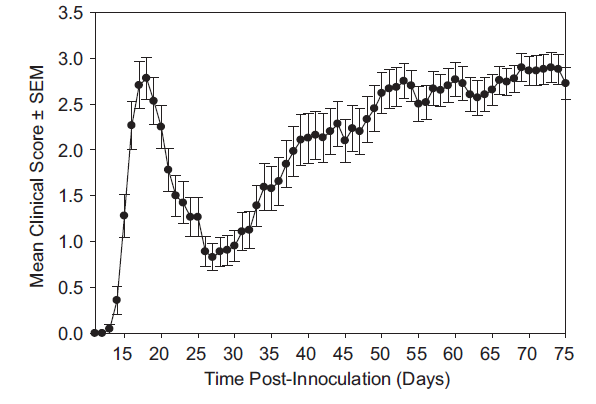 An attack and then it goes progressive?

Actually it does, but not at day 25 as the line graph suggests.

The above is all caused by relapsing-remitting disease driven by T cells. The relapses show increasingly poor recovery and so deficits accumulate with time. They are also asynchronous so they are not occurring at the same time and if you only look at the “line” you think the disease is secondary progressive. It is not.

We seldom get to see the individual data. I have repeated said people should publish the number of animals that get disease, the maximal severity of disease and timing of onset so it may allow you interpret these lines.

However, there appears to be one example, when the same people reporting the secondary progressive model, report in another paper and show individual scores. It suggests that EAE in NOD mice, is if fact not really an instant secondary progressive model starting at day 25 but it is in fact a relapsing-remitting disease with poor recovery, like the ABH mouse. This accumulates deficits related to relapsing attacks.

This is not a slow insidious progressive disease as implicated by looking at the line,which is an average of a number of animals 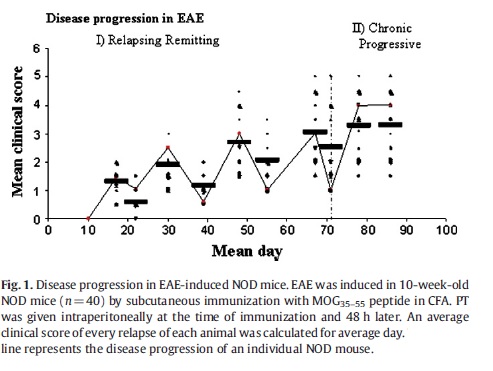 So if disease is really relapsing in NOD mice it will respond to FTY720 by their suppression, causing less demyelination, nerve loss and cytokine X or Y and less astrocyte activation.

Why is this important because, if it is a true secondary progressive model with validity it would not respond to peripheral immunosuppression very well as occurs in MS and maybe we can use this (taking a couple of months) rather than our current model (Taking 6 months) to test agents.

You can make your own conclusions,

If we had the raw data we could see in an instant what is really going on.

If we did, there would be time to eat humble pie or is this a case of MD-investigative reporter?

We have been talking about animal work this week. We had the suggestion of multi-centre animal studies. However, for EAE research raw data files would be the type of data that would be worth more for drug development than consortia doing multi-centre studies.

Could blocking astrocytes result in blockade of progressive EAE and MS …absolutely.

P.S. Dear “Headmaster” hope this style of walking you through data is informative..rather than giving a sound bite. This will be important when we do the clinical posts soon.