Multiple sclerosis is a demyelinating disease affecting the central nervous system. T cells are known to contribute to this immune-mediated condition. Fingolimod modulates sphingosine-1-phosphate receptors, thereby preventing the egress of lymphocytes, especially CCR7-expressing CD8+ and CD4+ T cells, from lymphoid tissues. Using Affymetrix Human Transcriptome Arrays (HTA 2.0), we performed a transcriptome profiling analysis of CD4+ cells obtained from the peripheral blood of patients with highly active relapsing-remitting multiple sclerosis. The samples were drawn before the first administration of fingolimod as well as 24 hours and 3 months after the start of therapy. Three months after treatment initiation, 890 genes were found to be differentially expressed with fold-change >2.0 and t-test p-value < 0.001, among them several microRNA precursors. A subset of 272 genes were expressed at lower levels, including CCR7 as expected, while 618 genes showed an increase in expression, e.g., CCR2, CX3CR1, CD39, CD58 as well as LYN, PAK1 and TLR2. To conclude, we studied the gene expression of CD4+ cells to evaluate the effects of fingolimod treatment, and we identified 890 genes to be altered in expression after continuous drug administration. T helper cells circulating in the blood during fingolimod therapy present a distinct gene expression signature 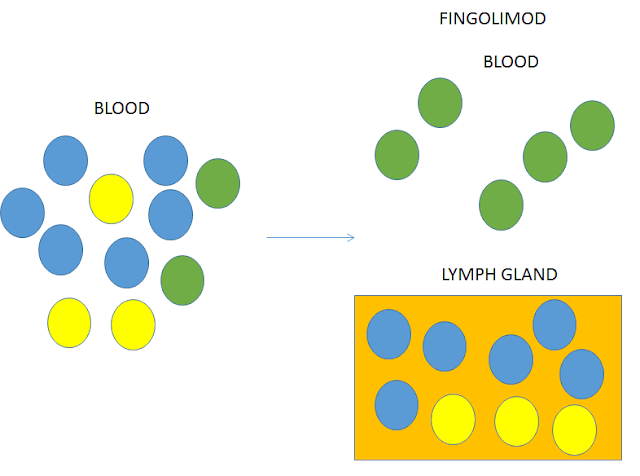 What does this work say…well if the hypothesis is right that B memory cells are important…Who cares!;-)

They report that the cell number of T cells reduce rapidly after drug administration After 24 hours and 3 months, the numbers of separated CD4+ cells were reduced, on average, by >20% and >90%, respectively. They then looked for genes and found that CCR7 expressed by naive and central memory cells goes down and some genes go up and others go down.

However how do I explain it, well you if remember the post above the post that shows that the proportions of cell types change and that the effector memory cells go up and knowing this the data is difficult to interpret because they are comparing apples with pairs and are comparing the effects of changing proportions.


We have been talking about the issue of proportions, thats why I talk about this paper to make the point, and we showed the changes of immune cells within the blood.

To recap have a look but what happens is that the naive (Blue) and the central memory (Yellow) get trapped in the blood increasing the effector memory (Green) in the blood after fingolimod.

So of course the message content is going to be different. Does this tell us about an effect of the drug changing cells functions or are we finding a way to measure cell content.

What you need to do is to compare the green before and the green after to understand what the drug is doing.