Tabalumab (LY 2127399) is an anti-B-cell activating factor (BAFF) blocking (not APRIL) human monoclonal antibody designed for the treatment of autoimmune diseases and B cell malignancies.Tabalumab was developed by Eli Lilly and Company.

A phase III clinical trial for rheumatoid arthritis was halted in Feb 2013.In September 2014, a second phase III trial focussing on treating systemic lupus erythematosus, was terminated early as the study failed to meet its primary endpoint.

What happened in MS?

A Study of Patients With Relapsing Remitting Multiple NCT00882999 involving 245 people in 63 centres in USA and Europe.

They say the Study was Completed what happened?

Was it like atacicept and it made things worse? or did it not do nothing? It can’t of worked or surely we would of heard.

Was it completed as said in June 2012 by the company or was it “Aborted” (the rest was written in German..does it mean completed) as linked to a comment by Norman Putzki (Biogen & Now Novartis). 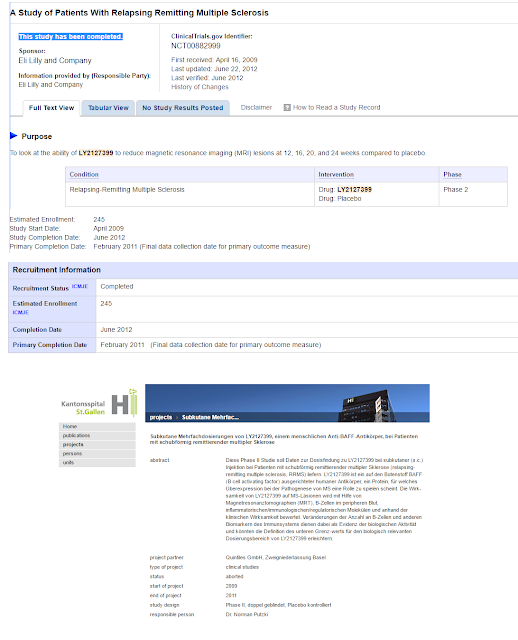 You sent a link to the Lily site that states

Lilly believes companies must act to earn the trust of the public they serve. To support this, Lilly supports responsible sharing of clinical study data and will continue to be an engaged partner in ongoing industry-wide discussions toward this goal.

Here are 7 ways in which we are committed to responsibly disclose our clinical trial data results for the benefit of patients and future research:


Whether favourable or unfavourable, Lilly posts the results of all Lilly-sponsored Phase II, Phase III and Phase IV clinical trials of Lilly marketed products conducted anywhere in the world that were initiated on or after October 15, 2002. I GUESS UNFAVOURABLE OR IT WOULD BE TALKED ABOUT……WAS IT MARKETED?

Results from all Phase III clinical trials and any clinical trial results of significant medical importance are submitted for publication.

We don’t just do this for medicines that have met their clinical goals and been approved for use – we also disclose results for investigational medicines whose development have been discontinued.

We register all Lilly-sponsored Phase II, Phase III and Phase IV clinical studies, conducted anywhere in the world, that were initiated on or after October 15, 2002, on www.clinicaltrials.gov.

Lilly also registers all Phase I clinical studies commencing on or after October 1, 2010 on www.clinicaltrials.gov.
Lilly, along with the industry as a whole, has started posting results to the European database www.clinicaltrialsregister.eu. Our first results were submitted on 21 July 2015. We are updating results for trials conducted in the EU on our marketed products back to trials from 2004. This is a 2 year process and will be completed in 2016.

We have an online portal to facilitate requests from legitimate researchers for clinical trial data here:www.clinicalstudydatarequest.com

Lilly is sharing data from clinical and interventional studies in patients for medicines and indications approved in the United States and the European Union. This study is not in scope for data sharing as tabalumab has not been approved as a treatment for any indication.
Kind Regards,
Data Sharing Team


Don’t they deserve to know what has happened?


There are over 60 sites across Europe and USA, somebody knows if it did nothing (maybe APRIL is what we need to focus on) or WORSE (then its BAFF).