As soon as rituximab and then Ocrelizumab was found to inhibit relapsing MS, companies began the hunt for “me-toos” to do the same thing.

Ocreliziumab depletes CD20 B cells and blocks relapses, so it gets rid of memory B cells, but not the earliest of B cells or the antibody forming plasma cells.

Unless you know what CD20-B cell depletion is doing, getting rid of the all B cells may not seem unresponable. 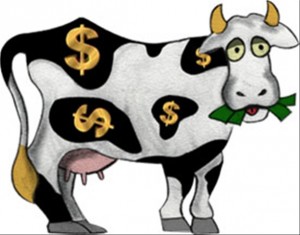 Merck made a fusion protein to block BAFF and APRIL B cell growth factors called Atacicept.

There was another one called Belimumab, which never made it into MS…..Luckily.

Rather than selecting a cashcow, looks they got a different beast

In fact Atacicept made things worse in trials!

Sponsor voluntarily decided to prematurely terminate this trial due to an increase in multiple sclerosis (MS) disease activity observed in atacicept arms of both trials as compared to placebo.

So is the problem APRIL, BAFF or both?

The answer comes with the result of what happened with tabalumab that blocks only BAFF.

A Study of Patients With Relapsing Remitting Multiple Sclerosis NCT00642902

The company has reported on Clinical tiral. gov that the trial was completed.

We don’t know because the results have not been reported.

Blocking BAFF gets rid of  mature B cells and can even get rid of plasma cells and reduce antibodies, but they appear to have the potential to increase the memory B cell pool, which recently we suggested could be the problem in MS.

Response to therapy may help elucidate whether the idea has any legs, it may help us understand treatement and may help us personalise this treatment.

You prompted us to ask more about access to the data, notably Lilly

The company website (Click) says “..companies must act to earn the trust of the public they serve“

However, as we have no access to data or the result, which one could predict worsened MS,  many years after the trial was completed, how is that going to lead us towards trust?

So when requested it is “out of scope“


“Whether favourable or unfavourable, Lilly posts the results of all Lilly-sponsored Phase II, Phase III and Phase IV clinical trials of Lilly marketed products conducted anywhere in the world that were initiated on or after October 15, 2002“

When asked specifically, it was said that “this standard only applies to marketed compounds“.

So as Talabummab was not a marketed we are not getting access to the data,

“Lilly discloses results of Lilly-sponsored clinical trials for compounds whose development terminates on or after October 1, 2009“.

In response to this question about disclosure the response was “We expect to submit the results of this study to Clinicaltrials.gov in the third quarter of this year following the official termination of the molecule’s development marked by the inactivation of the IND this year”.

This will no doubt say the trial failed, but will it say it worsened disease?

However, on clinical trials.gov it is unlikely to talk about the immunostaining and disease activity, which is the data that will help us understand what occurs in MS.

If there was an increase in B memory cells? How long did this occur, does it relate to disease activity?

I guess, we will never know.

Companies do preclinical testing to ensure their drugs are relatively safe, so that they can make an IND filing.

IND means an Investigational New Drug (IND) program is the means by which a pharmaceutical company obtains permission to ship an experimental drug to clinical investigators before a marketing application for the drug has been approved. The IND application is reviewed for safety to assure that research subjects will not be subjected to unreasonable risk. If the application is cleared, the candidate drug usually enters a Phase 1 clinical trial and beyond until they apply for a New Drug Application (NDA) which allows companies to market a product.

It seems development of Talabumab is not going to occur, so why hide results from people?

Even with providing access data, the publication process would mean that nothing would get published before Q3 (third quarter) 2017.


Is this just another case of Bad Pharma?