In this issue, I have predicted that this will be the year of the B cell,
as I expect ocrelizumab to get a licence for the treatment of relapsing MS, or
perhaps even active (relapsing & progressive) MS.

We have got the year off to a flying B cell start with our
recent paper, which shifts the focus from the T cell onto the B cell and
notably the memory B cell subsets. 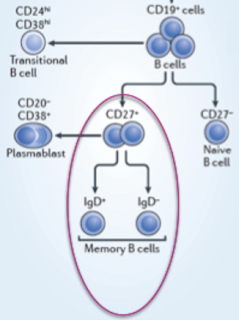 We have made an argument that active treatments act via
depletion of memory B cell subsets.

We know disease activity does not correlate with blood T
cell subsets or even CD19 B cell numbers, based on data with alemtuzumab, but
does disease activity relate to memory B cell activity?

Will Pharma come to the table and supply us with the
information that we know they have?

We wait to see if disease activity relates to B memory cell
activity.
That is a prediction/hypothesis.

If it does not….we may need to drill down to be more
specific because the driving force for relapses and active disease is immune
activity coming from the blood into the CNS and it will be a small fraction of any immune subset we care to look at.

We also know from studies in arthritis that relapse can
occur in the apparent relative absence of B cell activity in the blood so it will not be absolute, suggesting you do not need many of the wrong cells to trigger relapse.

So can we use this information to personalise the medical
approach to reduce the risk: benefit?
This has been done in other diseases where CD20-specific
antibody is active.

There are studies that report that disease activity can
correlate with peripheral blood memory B cell numbers and that they can be used
as a biomarker of when to retreat, as it is clear some people deplete for a few
months others for a few years.

Using this approach in myasthenia gravis (an antibody-mediated autoimmune disease), where the acetyl choline receptor is blocked stopping muscle function) the mean number of infusions of anti-CD20 could be reduced from 4/year down to 1.3/year by monitoring re-emerging CD27+ memory B cells.

However there is new study looking at NMO, which used
to be known by Devics MS. Is this the future way of using rituximab?
We know that NMO is
associated with an antibody against astrocytes and some of the treatments
promoting wellness in MS, make NMO worse. Likewise we know that some of the
issues important in the diseases above are also a problem of antibodies).
Therefore, it may be different in MS, but may be it won’t be.

This study treats people with MS,
but rather than religiously giving people rituximab treatment every 6 months,
they look at the CD19, CD27+ B cell numbers to provide an indication when to
retreat as their number seems to increase within about 4 months from the next
attack.

Don’t believe me that there is efficacy?

Look at the figure of before and after from Kim SH, Jeong IH, Hyun JW, Joung A, Jo HJ, Hwang SH, Yun S, Joo J, Kim HJ. Treatment Outcomes With Rituximab in 100 Patients With Neuromyelitis Optica: Influence of FCGR3A Polymorphisms on the Therapeutic Response to Rituximab. JAMA Neurol. 2015;72(9):989-95. I think its impressive. 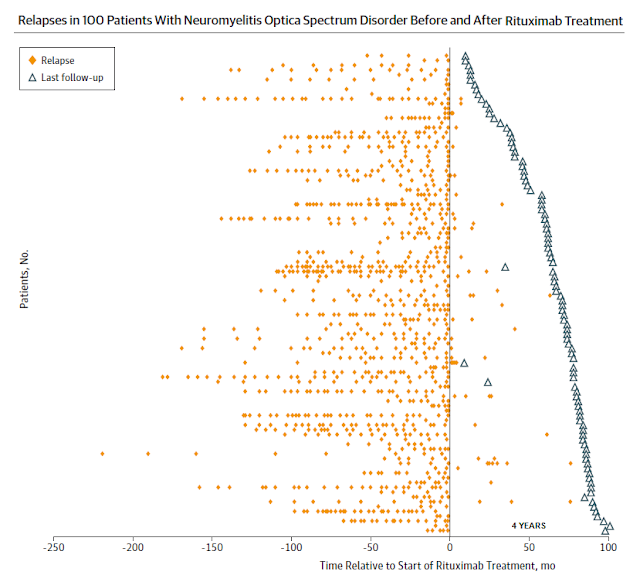 It is not perfect, but the number of relapses were reduced by 96%
from 2.4 (2 a year) to 0.1 (one every ten years). They administered another dose when the frequency of CD19+, CD27+ memory B cells within the CD19+ population reached 0.05% in the first two years and 0.1% in the second. This is reduced from normally about 20-30% of CD19 B cells (Switched =IgD- & Unswitched = IgD+) in the the healthy situation (click here. They should use absolute numbers per microlitre as it is more risky to use percentages).

In yet new another recent study

Could this be used in MS?

Based on the unpublished (actually read our paper as it is no longer unpublished:-) Phase II Extension data for Ocrelizumab, it appears that 6 monthly dosing (read our paper) may be more frequent that needed for some people.

The data above is also directly relevant to MS, because of rituximab is being used frequently in places such as Sweden.

There they are doing the COMBAT-MS study to determine the effectiveness of rituximab.
http://multiple-sclerosis-research.blogspot.com/2017/02/polticalspeak-offlabel-rituximab-and.html
If you can read or understand Swedish (Click).

Antibodies kill via either
complement fixation or via antibody-dependent cellular cytotoxicity (ADCC). This
latter method of killing is used predominantly by alemtuzumab and ocrelizumab also, in fact ocrelizumab is more dependent on this than rituximab.

This occurs because phagocytic cell/natural killer cells bind to the Fc (tail) of
the antibody by an Fc Receptor. Interestingly a genetic variant of one of the
Fc Receptor links to activity.

Kim et al. 2015 found factors that influenced depletion of the memory B cells and one factor was notably a variant of a gene FCGR3A (Fc receptor gamma 3A).


If there was a phenyalanine (F) amino acid at position 158 of the molecule compared to the usual  valine (V) the receptor had a lower binding capacity for IgG (If you are heterozgous (F/V) or homozygous (F/F), there was a reduced response to (V/V) B cell depleting response. The residue at position 158 directly interacts with the lower hinge region of IgG1

If you had the F/F variant you depleted B cells less well and were at a greater risk of relapse.


What is going to happen in the PCORI (at the Karolinska Institute home of MS genetics in Sweden) study?


Surely they should be genotyped to link genotype with depletion/clinical efficacy.


This genotype can influence the efficacy of other IgG1 antibodies


What is it going to do with daclizumab and notably alemtuzumab (there is no influence with the cancer dose, but based on rituximab the influence of FCG3A is antibody dose-dependent) and ocrelizumab?

Are you going to be a good depletor?


Currently CD19+, CD27+ and genotyping are not routine maybe they will be in the future