We have made a suggestion that most if not all MS drugs work by targeting a memory B cell subset. So we should attempt to disprove this, which is the science method.


Therefore is the idea disproved already. When we came up with the B cell idea it was based at looking at highest-efficacy drugs. Dimethyl fumarate was not as clear cut, but its efficacy on relapse rate is reported to be less than some of the more effective agents.


The CD4 hypothesis of MS has been challenged by the fact that depletion of CD4 T cells with CD4-specific antibody, did not inhibit MS yet depleted CD4 T cells by 70%, so people switched their attention to CD8 T cells that are more common in MS lesions.

So what would the effect of depleting CD8 T cells, be?
Does it inhibit? Do nothing? Or make MS worse?

Alemtuzumab depletes CD8 very well, for at least for 6-12 months, but ocrelizumab is not that good at depleting CD8 T cells so they can’t work in the same way, can they?

In the latest report the suggestion is Dimethyl fumarate (DMF) depletes CD8 T cells and their level of depletion controls MS. Their contribution has not been investigated before….really?

BACKGROUND: The effect of dimethyl fumarate (DMF) on circulating lymphocyte subsets and their contribution as predictors of clinical efficacy have not yet been investigated in multiple sclerosis (MS).
OBJECTIVE: To evaluate lymphocytes and lymphocyte subsets (analyzed 6 months after DMF start) in MS patients with and without disease activity after 1 year of treatment in a retrospective study.
METHODS: Peripheral blood lymphocyte subsets were analyzed by flow cytometry. Untreated MS patients ( n = 40) were compared to those 6 months after onset of DMF treatment ( n = 51). Clinical and magnetic resonance imaging (MRI) disease activity of DMF-treated patients were assessed in the first year under treatment.
RESULTS: Stable patients showed significantly lower lymphocytes, CD4+ and CD8+ T cells as well as CD19+ B cells compared to active patients under DMF treatment. Furthermore, an increased CD4/CD8 ratio ( p < 0.025) in stable patients indicated a disproportionate reduction of CD8+ T cells relative to CD4+ T cells. Reduced lymphocytes, CD8+ T cells, and CD19+ B cells 6 months after DMF start allowed prediction of the treatment response in the first year.
CONCLUSION: DMF treatment response is reflected by lower circulating lymphocytes and specific lymphocyte subsets. Changes in the cellular immune profiles under DMF treatment are clinically relevant and might serve as a surrogate marker of treatment response.

It was published on April the first, so is this a joke?

Are you confused?  I am . If you work in the one lab you really must be confused, CD8 one month and in the same month we are back to good old CD4 Th17 as the culprit:-).

OBJECTIVE: Natalizumab is known to prevent T-helper cells entering the central nervous system (CNS). We hypothesize that more pathogenic T-helper cells are present outside the CNS and a possible relationship to disease severity.
METHODS: Characterization and enrichment of human CD4+IL-17+ cells were performed ex vivo using peripheral blood mononuclear cells from natalizumab-treated relapsing-remitting multiple sclerosis (RRMS) patients ( n = 33), untreated RRMS patients ( n = 13), and healthy controls ( n = 33). Magnetic resonance imaging (MRI) scans were performed routinely for patients.
RESULTS: Lymphocytes were elevated in peripheral blood of natalizumab-treated patients compared to untreated patients and healthy controls. Whereas group comparison for CD4+IL-17+ numbers also differed, CD4+IFN-γ+ and CD4+IL-22+ counts were not increased. CD4+IL-17+ cells not only expressed but also secreted IL-17. In natalizumab-treated patients, IL-17+ cell frequency was found to correlate with T1-hypointense lesions, but was not an indicator for rebound activity after treatment discontinuation, except in one patient who experienced a fulminant rebound, and interestingly, in whom the highest IL-17+ cell levels were observed.
CONCLUSION: Increased lymphocytes and CD4+IL-17+ cells in the blood of RRMS patients receiving natalizumab corroborate the drug’s mechanism of action, that is, blocking transmigration to CNS. Correlation between IL-17-expressing lymphocytes and T1-hypointense lesions underlines the important role of these cells in the disease pathology. 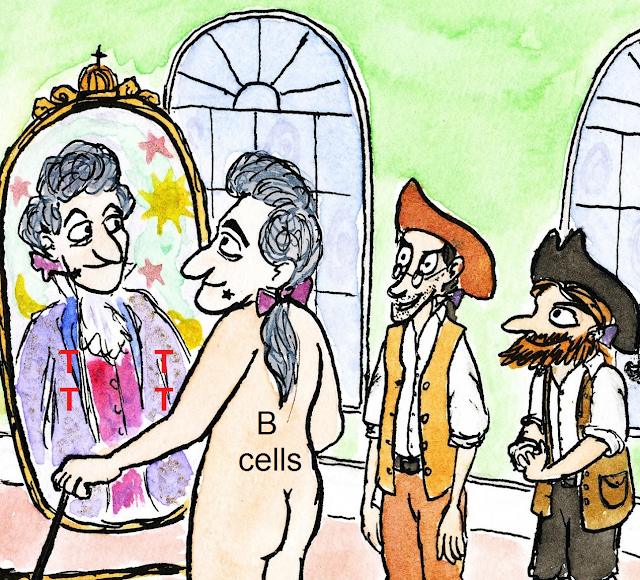 So is this a case of the Emporers New Clothes. We are so busy maintaining the Th17 mantra that no one dares say anything and if we are only looking for Th17, is it surprising we only see Th17 cells? What else changed in the rebounders to link to disease.
“The Emperor’s New Clothes“ is a short tale written by Danish author Hans Christian Andersen, about two weavers (immunologists) who promise the emperor (Science guru) a new suit of clothes (new mechanism of disease) that they say is invisible (yep invisible… after all cells are microscopic).to those who are unfit for their positions, stupid, or incompetent. When the Emperor parades before his subjects (scientists) in his new clothes, no one dares to say that they don’t see any suit of clothes on him for fear that they will be seen as “unfit for their positions, stupid, or incompetent”. Finally, a child (me) cries out, “But he isn’t wearing anything at all!” (It ain’t CD4 T cells)

But now back to the story

Looking at the P value p=0.0498 just about P<0.5 then there must be massive variation going on. Is this why efficacy of DMF is variable, but I digress.

However, the first study suggests that DMF acts by depleting CD8 T cells. It would say that cladribine is not a very good immune modulator and ocrelizumab would not be a very good immune modulator if there was a common mechanism of action between the three drugs. However, the latter have equal or better efficacy to DMF and so the argument falls apart. So they have different mechanisms.
So if you have less CD8 are you going to be less good at getting rid of viruses, like JC virus, and EBV? So is the idea of getting rid of this virus flawed? If MS was caused by a virus kept in check by the CD8 T cells then surely DMF should make MS worse.

Is doesn’t, so does that say the accumulation of CD8 cells in the CNS is not because there is a virus in there but because the CD8 T cells are autoimmune. It also suggests that there isn’t much CD8 T regulation in MS, as this would make MS worse too.

In this study at the top they report that the level of control of MS, is associated with the level of CD8 depletion. For alemtuzumab, this is not reported to be the case,

But is the elephant in the room in Fleischer et al. 2017 B cells. “Stable patients showed significantly lower lymphocytes, CD4+ and CD8+ T cells as well as CD19+ B cells compared to active patients under DMF treatment.

“Reduced lymphocytes, CD8+ T cells, and CD19+ B cells 6 months after DMF start allowed prediction of the treatment response in the first year,

Why were they not investigated too? Maybe an oppertunity missed?  Disease activity linking to memory CD8 T cells and not memory B cells could kill the hypothesis, but it isn’t dead just yet.


In fact the point of this post is to discuss


Objective: Given the immunomodulatory properties of delayed-release dimethyl fumarate (DMF) and its observed
effects on lymphocytes, further research evaluating these effects is needed. We are conducting this study to
comprehensively characterize the effects of DMF on circulating lymphocyte subsets and immunoglobulin levels
within the first year of treatment and beyond.
Background: DMF is an approved oral disease-modifying therapy (DMT) to treat RRMS. DMF has putative
immunomodulatory properties through activation of the Nrf2-dependent and NRF2-independent pathways. A
mean ALC decrease by ~30% during the first year of treatment has been observed in pivotal trials and in realworld
settings; however, a detailed and comprehensive analysis of the impact and time course of changes in
circulating lymphocyte subsets has not been described.
Design/Methods:
In this ongoing, open-label, multicenter study, 218 patients aged 18-65 years with RRMS were enrolled and
treated with DMF 240mg twice daily. Blood samples were taken at baseline, and at Weeks 4, 8, 12, 24, 36, and
48. Lymphocyte subset changes were monitored by flow cytometry using a comprehensive panel of surface
markers and intracellular cytokines.
Results:
This interim analysis includes ~165 patients from 6 different countries with ≥6 months follow-up or who
discontinued the study earlier. The overall safety results and the changes in ALC and detailed lymphocyte subset
counts, including phenotypic characterization of CD4+
T-cell, CD8+
T-cell, B-cell, and natural killer cell subsets,
based on a comprehensive panel of surface markers and intracellular cytokines will be presented.
Conclusions:
The results will provide insight into the effects of DMF on a comprehensive panel of immune cell subsets and their
correlation with changes in ALC within the first 6 months of treatment initiation and may help to understand
treatment-related changes in immune cell function.
Study Supported by: Biogen


On face value not one to get your juices going but when you see the poster …Ace.  (You can see the poster by going to the AAN2017, click on the search abtracts. see comments how to find it) . This study looks at 163 people and tests to see what cells are depleted over 6 months of DMF. Yes we can indeed see that CD8 cells are depleted, but they have done an amazing panel of different cell types and TH17 are not that down,  so where do you look. I look at Memory B cells and they are depleted, and within the CD19 population they are the major subset affected, if only this study can link depletion to disease activity it could another major key in understanding of MS.


It shows you all the problems of data interpretation of flow cytometry (How you make the Emporers clothes). If you look at the percentage changes you can see that the natural killer cells CD56 bright increased by daclizumab are up and T regs are up so here’s an alternative mechansim for DMF, but when look at the absolute numbers there is no change….The numbers of the T regs appear to go up because other cells do down. Check it out I would bet on closer inspection of many papers, we will find this fudge and mis-interpretation of the result.