There is a story going round the media that the cause of multiple sclerosis has been found.  You can read the paper as it is open access and was published at the end of January.

I have been accused of being HDAD with the post’s today…but ProfG has asked that we comment on this story ASAP.

Is this the cause of MS? I would say absolutely not.

It describes a way that nerves can die following inflammation.

If you want it put in a simple way it is a bit like Cluedo. (Clue).  We know that nerves get damaged and die due to inflammation.

The room. It is in the active lesions 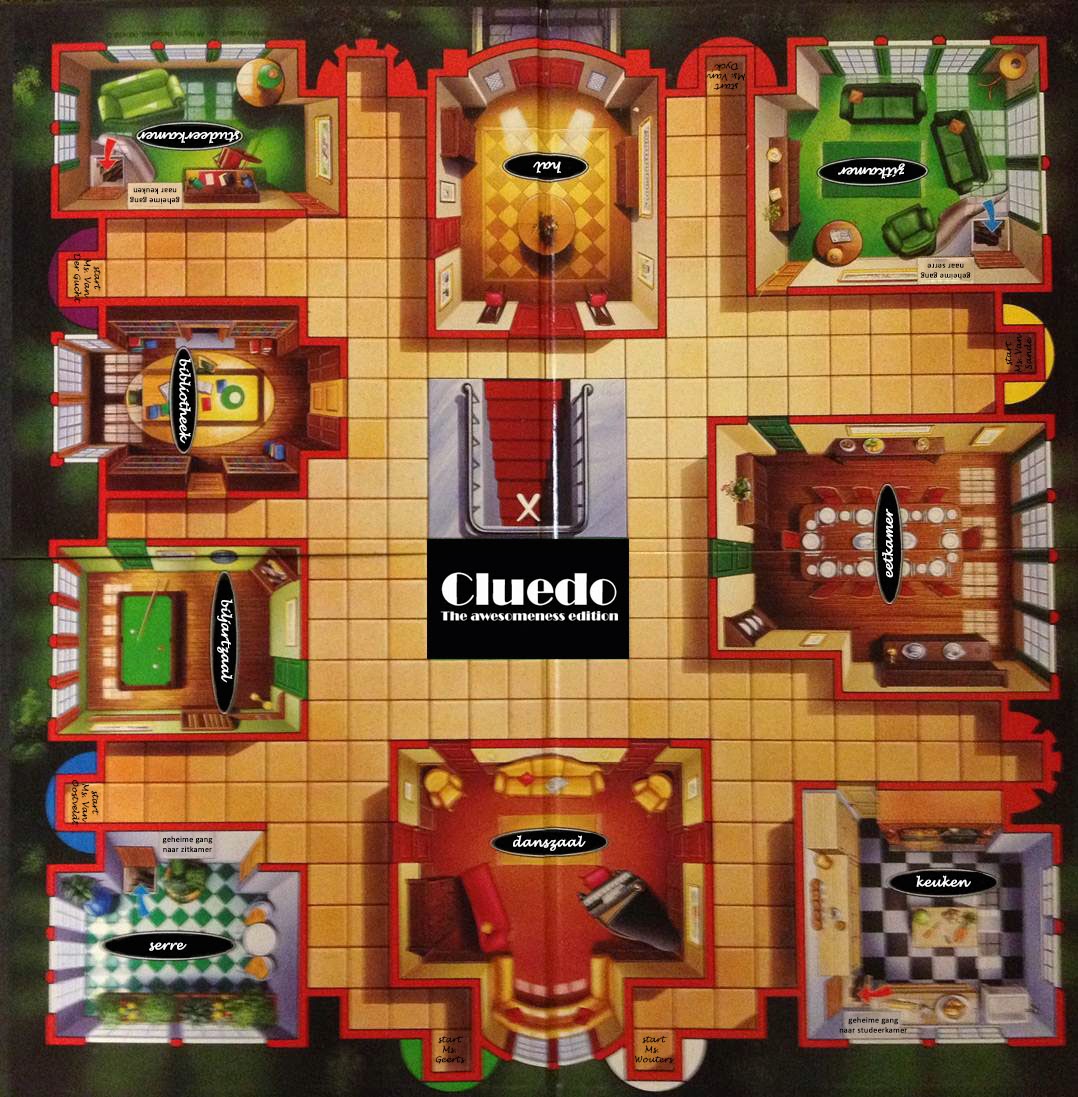 The m**der weapon (if I spell this word if makes us an adult site)
The results of the study kind of gives us a weapon or a pathway
for the weapon to do its damage. It does not give us the murderer. (the cause of MS). Is it the Rev or Professor Plumb we still don’t know. Background: Endoplasmic reticulum (ER) stress is a hallmark of neurodegenerative diseases such as multiple sclerosis
(MS). However, this physiological mechanism has multiple manifestations that range from impaired clearance of
unfolded proteins to altered mitochondrial dynamics and apoptosis. While connections between the triggering of the
unfolded protein response (UPR) and downstream mitochondrial dysfunction are poorly understood, the membranous
contacts between the ER and mitochondria, called the mitochondria-associated membrane (MAM), could provide a
functional link between these two mechanisms. Therefore, we investigated whether the guanosine triphosphatase
(GTPase) Rab32, a known regulator of the MAM, mitochondrial dynamics, and apoptosis, could be associated with ER
stress as well as mitochondrial dysfunction.
Methods: We assessed Rab32 expression in MS patient and experimental autoimmune encephalomyelitis (EAE) tissue,
via observation of mitochondria in primary neurons and via monitoring of survival of neuronal cells upon increased
Rab32 expression.
Results: We found that the induction of Rab32 and other MAM proteins correlates with ER stress proteins in MS brain,
as well as in EAE, and occurs in multiple central nervous system (CNS) cell types. We identify Rab32, known to increase
in response to acute brain inflammation, as a novel unfolded protein response (UPR) target. High Rab32 expression
shortens neurite length, alters mitochondria morphology, and accelerates apoptosis/necroptosis of human primary
neurons and cell lines.
Conclusions: ER stress is strongly associated with Rab32 upregulation in the progression of MS, leading to
mitochondrial dysfunction and neuronal death. 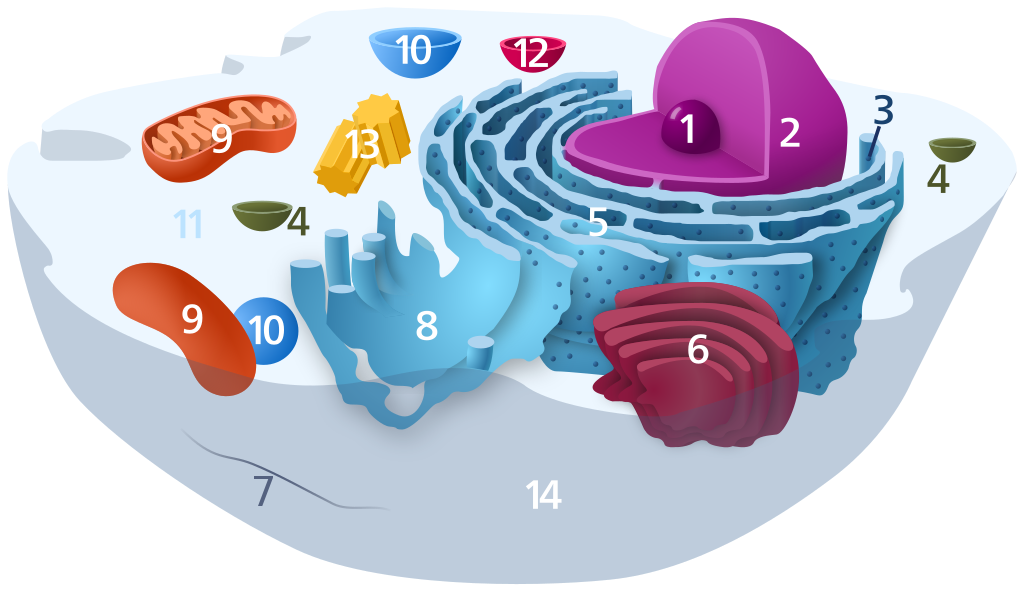 Diagram of a typical animal cell. Organelles are labelled as follows:

So what is all this about, I didn’t report it previously as to explain means we have to go through a few things first.

The mitochondria is the power house of the cell and it is where the energy for a cell is made.

The brain uses about 20% of the bodies energy, to maintain nerve traffic and we know that there are a number of problems with mitochondria in MS as a cause of downstream problems and as a consequence of upstream problems. 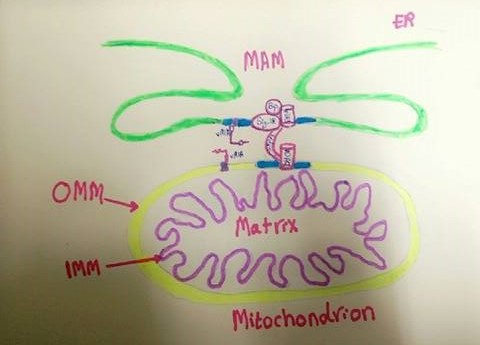 Mitochondria associated membranes are involved in the transport of calcium from the endoplamsmic reticulum to mitochondria. This interaction is important for rapid uptake of calcium by mitochondria through  ion channels, which are located at the outer mitochondrial membrane (OMM). This transport is regulated with chaperones  (Proteins that affect protein folding so that they are made in the correct shape. Last week we heard how misofolded proteins may be important in neurodegenerative diseases) and regulatory proteins which control the formation of the ER–mitochondria junction.

This calcium is part of normal function but if a cell accumulates too much calcium in the for of electrically charged calcium ions, it triggers cell suicide, which is a process known as apoptosis The main cellular calcium ion store is in the endoplasmic reticulum.

Release of calcium ions within the diseased cell can enter the mitochondria via the MAM gateway and can trigger cell death.

RAS associated binding (Rab) proteins and protein that regulate steps in the traffic of substances across membrane and one them is is called Rab32.

What has been found in this study is that during inflammation of the brain there is a increase in the production of Rab32, so it means there can be extra membrane traffic. In this study they found that there was an increase in the Rab32 protein in the mitochondria during multiple sclerosis an was highest in places of active inflammation.

This was associated with the chaperones and also the formation of MAM proteins so that in active lesions the mitochondria appeared to be fusing with the endoplasmic reticulum. This what could be seen in animals with neurodegeneration was also seen in humans. They found the rab32 is swollen axons suggesting that they were dystrophic and on their way to damage and destruction.

It was also found in microglia within the active lesions and even in blood vessels, suggesting that this may occur inresponse to something within the local environment

Depletion of Rab32 from nerve cells didn’t have much of an affect, but when they put Rab32 into ther nerve it caused damage to the mitochondria and nerve death, this occured by apoptosis (cell suicide where the cell contents aren’t liberated) and Necroptosis is a programmed form of necrosis (whether the cell contents are liberated), or inflammatory cell death.  Necrosis is associated with unprogrammed cell death resulting from cellular damage or infiltration by pathogens, in contrast to orderly, programmed cell death via apoptosis.

Rab32 as a new
marker for active and chronic inflammatory lesions of
the CNS in MS whose endoplasmic stress (leading to increases in calcium levels)-triggered transcription
leads to altered mitochondrial dynamics and neuronal
cell death.

So this is nice work showing us how nerves may die during active inflammation, however it is hardly the cause of MS.

That this marker occurs in other cells suggests that a similar response is occuring other cells in response to the stimulus possibler hypoxia (lack of oxygen) or maybe a cytokine or some other toxic substance. However as to cause MS, I think more non-sense in the media.

Can this be a treatment, so if we block Rab32 in nerves does it spare them from death. We have shown that is you block Caspase which is a death effector mechanism for apoptosis it may be possible to save the nerves. So it may give rise to a treatment. Further work, is needed but I can see the work in the Rab32 knockout already.

Don Mahad from the University of Edinburgh, via AAN ,Agrees

“Hi
Doing a piece for BBC radio Scotland just now. In Boston at AAN. Makes a contribution to existing knowledge on mechanisms of tissue damage but not the cause of MS
Happy to write more if you wish”.