In the week that began with a bit of Fake News about the cause of MS, and it ends with something that is perhaps related to the cause,

but two “Cause” stories in a Week are not going to make it in the News.


Why do I say cause, because this is Genetics and this is the predisposition of Risk.

So what have B cells got to do with Mosquitos? 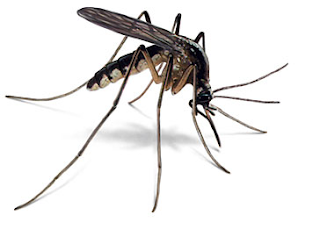 BACKGROUND: Genomewide association studies of autoimmune diseases have mapped hundreds of susceptibility regions in the genome. However, only for a few association signals has the causal gene been identified, and for even fewer have the causal variant and underlying mechanism been defined. Coincident associations of DNA variants affecting both the risk of autoimmune disease and quantitative immune variables provide an informative route to explore disease mechanisms and drug-targetable pathways.
METHODS: Using case-control samples from Sardinia, Italy, we performed a genomewide association study in multiple sclerosis followed by TNFSF13B locus-specific association testing in systemic lupus erythematosus (SLE). Extensive phenotyping of quantitative immune variables, sequence-based fine mapping, cross-population and cross-phenotype analyses, and gene-expression studies were used to identify the causal variant and elucidate its mechanism of action. Signatures of positive selection were also investigated.
RESULTS: A variant in TNFSF13B, encoding the cytokine and drug target B-cell activating factor (BAFF), was associated with multiple sclerosis as well as SLE. The disease-risk allele was also associated with up-regulated humoral immunity through increased levels of soluble BAFF, B lymphocytes, and immunoglobulins. The causal variant was identified: an insertion-deletion variant, GCTGT→A (in which A is the risk allele), yielded a shorter transcript that escaped microRNA inhibition and increased production of soluble BAFF, which in turn up-regulated humoral immunity. Population genetic signatures indicated that this autoimmunity variant has been evolutionarily advantageous, most likely by augmenting resistance to malaria.

CONCLUSIONS: A TNFSF13B variant was associated with multiple sclerosis and SLE, and its effects were clarified at the population, cellular, and molecular levels.

Although MS is usually less common the further south you go in the Northern Hemisphere, Sardinia in Italy is unusual.


It has an unusually high incidence of multiple sclerosis and also autoimmune diabetes is common. The Sardinians have some genes in their MS that are more associated with arthritis/diabetes, but this new study identifies a susceptibility gene. It tells us B cells are likely to be involved because the gene is B cell activating factor (CLICK). BAFF). This gene is also found in people with Lupus (SLE) an antibody mediated autoimmune disease that be controlled by CD20-B cell (rituximab) depletion

The genetic variant in MS was associated with increased BAFF levels, this will support growth of mature B cells and plasma cells making antibodies. Is this the issue?

They showed the BAFF-var dramatically augmented levels of soluble BAFF, which we know are elevated in MS 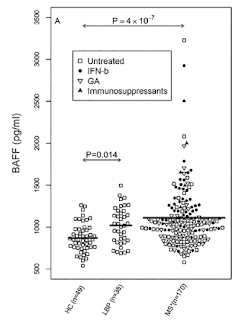 They showed that BAFF-var dominated the association with circulating B cells levles (B-cell counts, P=4.23×10−12; B-cell percentage with respect to lymphocytes, P=9.36×10−23)


Furthermore to refine the target-cell type, they carried out deeper profiling of six B-cell subtypes. Rather than any particular subtype explaining the overall B-cell association, several subtypes were affected, with CD24+CD27+ (comprising unswitched and switched memory) B cells being most strongly associated.


They then showed that the presence of the gene variant was positively selected in the Sardinian population meaning that there was some advantage in having the gene.

BAFF over expression can protect mice from lethality due to malaria infection and malaria was present in Sardinia until the 1950s so BAFF may confer protection against Malaria, hence the mosquito

The genetic variant was common in Sardinia (26.5%) but in the UK 1.8% in the United Kingdom and Sweden), so it may not a reason why people in UK get MS, however, perhaps if we look genetic pathways leading to memory cell formation other genese may do the same thing.


Our immune genes variants are there to protect us from infection, and it is likely that the MS genes are perfectly normal variants that we use to fight infection. These would keep us alive until we can have babies. If we have certain combinations of these normal genes they may make such a good immune response that in a small percentage of people they may attack their one body.


This would be acceptable from the view of maintaining the human race, just like the human species would tolerate the sickle cell mutation, and so the genes that lead to MS would not be selected against particularly because most people historically would have had their children before MS strikes. So these genes remain.


Now the question we all want to know is does this cause lead to a cure and the quick answer is No definitely not and in fact the opposite is the case.


Importantly we should definitely not listen to the authors of this paper who have not done their reading.

They say “we infer that the increased risk of multiple sclerosis and SLE associated with BAFF over-expression mainly involves humoral immunity, consistent with the efficacy of B-cell–depleting therapies”

“A pertinent one, to be assessed in further studies, would be that patients stratified according to BAFF-var status might show a differential benefit from anti-BAFF therapies. One might also anticipate that patients carrying BAFF-var would have a weaker response to B-cell–depleting therapies owing to a faster resurgence of memory B cells”


The first mistake here is to assume that the influence of the gene is relevant after disease onset (it is a risk factor!). It is much more likely to influence disease before it develops to increase risk. It would make mature cells develop is a certain way and these down the line could become memory B cells.

The second mistake is to assume that anti-BAFF is protective it may not be. BAFF can also have an inhibitory role in the development of B differentiation and block BAFF and the number of memory cells can increase and MS can worse.

However, memory B cells may not respond well to blockade of BAFF and it may actually increase MS. We have seen this with atacicept, which blocks BAFF and APRIL B cell growth factors.

It is now very clear that we as a community really need to see the data that Ely Lilly is holding.


They have done a trial of blocking only BAFF with tabalumab. This has not been developed for SLE, and thus is unlikely to be used in MS, but Belimumab is available for SLE and somebody unaware of the tabalumab trial could try it with disastrous consequences. Maybe it was the APRIL that was the problem

Did the tabalumab do nothing or did it make MS worse?


Please Read the link below
http://multiple-sclerosis-research.blogspot.com/2017/03/politicalspeak-ethical-or-unethical.html

Therefore blockade of BAFF is perhaps the last thing you want to do without some thought. Maybe we should do the opposite.


Although not realized by the authors, in conclusion we have yet more evidence for the memory B cells as a pivotal cells in the MS pathway: genetics, aetiology infection, pathology and – importantly – response to therapy…. the evidence mounts!

Are there other genes involved in the cause?

Of course there are, over 150 have been implicated and there are a few hundred more to find, so more millions down the science plug-hole:-). Each of these caries a very small increase in the risk of MS. No genetic variant is absolutely necessary. The main region is the major histocompatibility complex (MHC), which controls what you recognize as an invader/infection. Number 2 gene was the interleukin 7 receptor, which has been confirmed in another study.

Liu H, Huang J, Dou M, Liu Y, Xiao B, Liu X, Huang Z.
Variants in the IL7RA gene confer susceptibility to multiple sclerosis in Caucasians: evidence based on 9734 cases and 10436 controls. Sci Rep. 2017;7(1):1207. doi: 10.1038/s41598-017-01345-8.
Recently, numerous genome wide association studies (GWAS) and other case-control association studies examining the relationship between interleukin-7 receptor α chain (IL7RA) gene rs3194051, rs987107, rs11567686, and rs11567685 variants and multiple sclerosis (MS) risk have been conducted, but the conclusions have been inconsistent. The main objective of this meta-analysis was to more precisely explore the association of these four IL7RA variants with MS development. Twenty-seven eligible studies involving 9734 cases and 10436 controls were included in the present meta-analysis. Power calculation, publication bias, sensitivity analysis and cumulative meta-analysis were performed to derive a reliable conclusion. Our study indicated three IL7RA loci were significantly associated with increasing MS risk (rs3194051: recessive model: OR = 1.22, 95% CI 1.08-1.38; rs987107: recessive model: OR = 1.44, 95% CI 1.22-1.69; and rs11567686: dominant model: OR = 1.18, 95% CI 1.01-1.37). Additionally, IL7RA rs11567685 variants might not be related to MS development. In all, IL7RA locus polymorphisms could play an important role in the predisposition to MS, which could contribute to a better understanding the pathogenesis of multiple sclerosis.