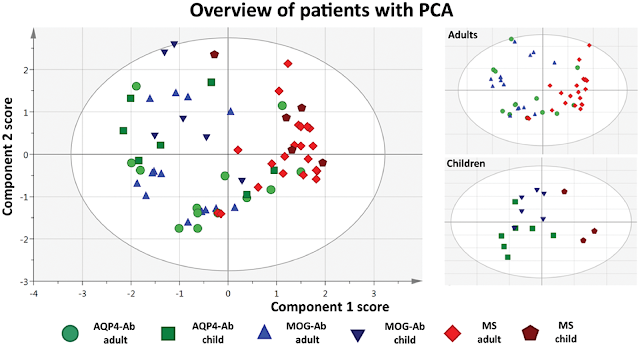 Figure 1: Principal component analysis (PCA; statistical modeling) looking at subjects involved without a priori knowledge of their diagnosis. The MS adults are on the right-hand side in a majority of cases vs antibody-mediated disorders.

I guess you can’t teach an old dog new tricks, but, you can give an old dog new toys. This is what Jurynczyk et al. have done, pulling together their imaging and biological expertise, coming to the conclusion that based on MRI appearances alone that you can differentiate MS from other autoantibody-mediated disorders (see Figure 1 above). So, what are their findings?

The former targets MOG located on the outer layer of myelin, whilst, the latter targets Aquaporin on astrocytes. Despite, the different targets you cannot distinguish between the two.

They found ‘fluffy’ brainstem (the area between the forebrain and spinal cord) lesions and three lesions or less in MOG antibody disease (see Figure 2), which has not been described before. Moreover, children with this disorder frequently displayed large, bilateral brainstem and deep grey matter lesions (basal ganglia) than adults. Before, we knew about MOG, I remember putting these cases into the ADEM (Acute Demyelinating EncephaloMyelitis) category (again ADEM is an MRI diagnosis). The authors propose that using this new description can be used to diagnose MOG disease in centers where the antibody test is not available. I personally think this would lead to over- or mis-diagnoses, and as we use more targeted treatments in inflammatory disorders this may prove dangerous. 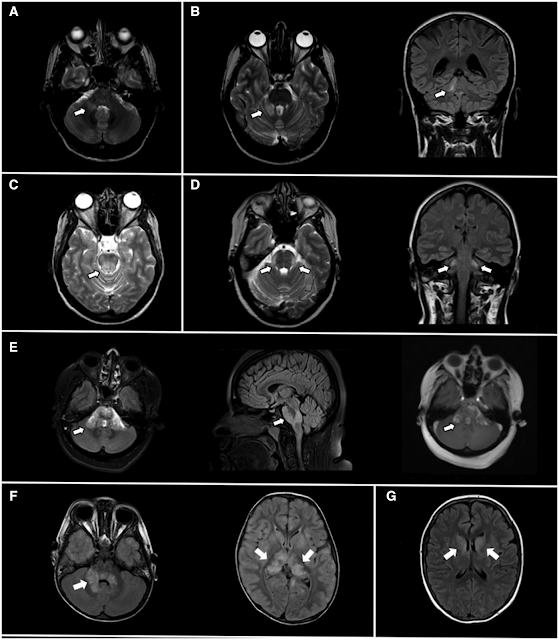 Interestingly, they also found in NMO subjects with brain lesions during an attack were more likely to experience simultaneous transverse myelitis – 75% (called as such when inflammation involves the spinal cord) than optic neuritis – 50% (when it involves the eyes), suggesting a mode of spread for these antibodies (maybe via the venous plexus or the lymphatic system).

Features that differentiate MS from antibody mediated disorders include ‘ovoid’/round lesions adjacent to the lateral ventricles and Dawson’s fingers (see Figure 4). In children T1 black holes were also a helpful pointer towards MS (probably an indication of the regenerative capacity of the young brain from one-off antibody mediated attacks). 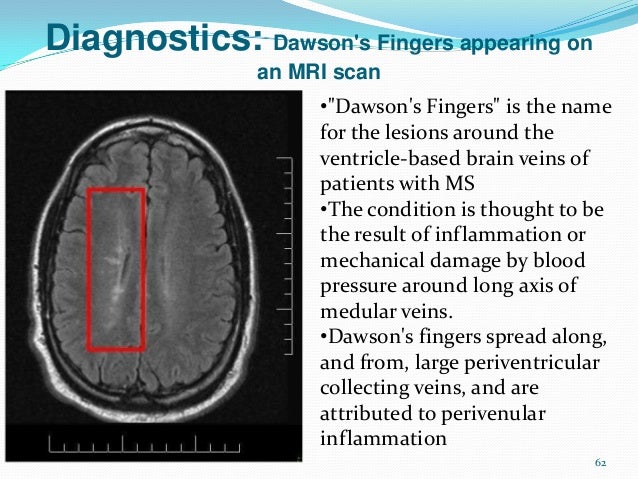 One of the failings of this paper is the lack of evaluation of the
‘normal’ MRI, as one of the biggest confounder’s of white matter
lesions is the so-called small vessel ischaemic lesion (vascular strokes), which increases
with age. Equally, whether this guidance will prevent our neuroradiologists from
offering a differential of ADEM, MS, NMO and inflammation in general for the same case is a
debate for another day.