Recent demonstrations of exacerbation of experimental autoimmune encephalomyelitis (EAE) by high salt diets prompted us to study whether EAE stimulated Na absorption by the renal cortex, a primary regulatory site for Na balance, even under a normal NaCl diet. We found that as EAE progressed from mild to severe symptoms, there were parallel increases in the protein abundance of NHE3 and αENaC and the Na,K-ATPase activity with an affiliated elevation of its β1-subunit protein. These effects are associated with increases in the protein levels of the well-known regulators SGK1 and scaffold NHERF2, and phosphorylation of ERK1/2. These effects of EAE could not be explained by reduction in water or food intake. We conclude that EAE progression is associated with up-regulation of major Na transporters, which is most likely driven by increased expression of SGK1 and NHERF2 and activation of ERK1/2. These data suggest that EAE progression increases Na absorption by the renal cortex. 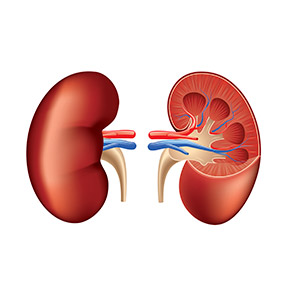 We have heard how some people think that salt (sodium chloride) is a driver of autoimmunity and so as the saga carries on people are now looking at sodium balance and in this study and shows that the kidneys can influence salt balance. I don’t have time to explain this one but it shows were ideas can get you. Is disease activity related to kidney function?