Cortical lesions (CLs) are an important component of multiple sclerosis (MS) pathology; they correlate better with physical disability and cognitive impairment than white matter lesions (WMLs). Because remyelination can be extensive in CLs, we quantified remyelination in gray matter (GM) and white matter (WM), addressing oligodendrocyte (OGD) maturation state and clinical relevance of remyelination. Brain tissue samples from 21 chronic MS patients were immunohistochemically stained for myelin proteolipid protein, Olig2, which is strongly expressed in OGD precursor cells (OPCs), but weakly expressed in mature OGDs and other OGD markers. Sections were scored for the presence of normal-appearing WM and GM, de- and remyelination, and OPC and OGD cell counts. Remyelination was significantly more extensive in CLs than in WMLs with a trend toward more GM remyelination in primary progressive MS (PPMS) vs relapse-onset MS patients. More OPCs were found in remyelinated and nonremyelinated CLs vs remyelinated WMLs and nonremyelinated WMLs. Thus, there is more remyelination in the GM than in the WM in MS patient brains, with a trend toward more remyelination in those with PPMS. There does not seem to be a significant OPC recruitment failure in the GM, which casts new light on the process of remyelination failure. 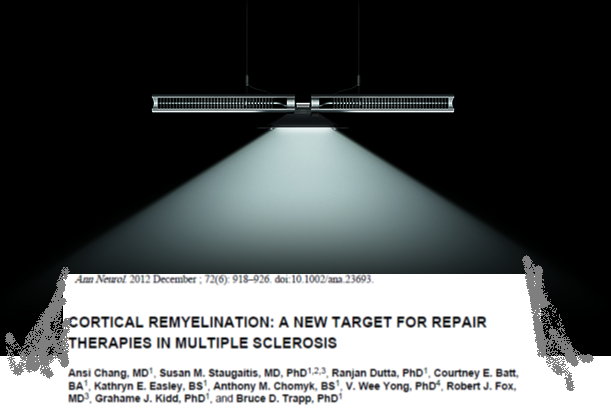 So Grey matter can remyelinate better than white matter, this supports what has been said before.