If you haven’t been living under a rock for the past few months :-),
you will have noticed that we have been saying that MS drugs that work the best, seem to deplete the memory B cells the most.

What! You are a ground hog and have just come out of hibernation.

Centre stage is the memory B cells. According to the Immunologist they can turn into antibody making machines to help create MS, they can make goodies (cytokines) or should I say baddies that can help other cells to create MS and for the die-hards stuck in the mud, they can stimulate T cells to do the business. 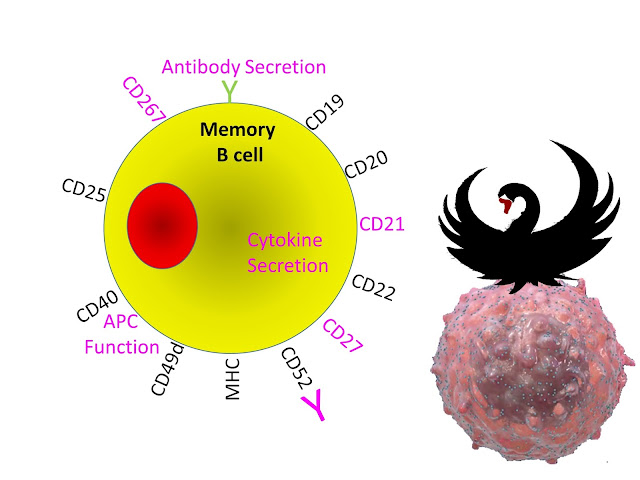 However, we can see ProfG’s Black swan perched on a Roche-inspired B cell. Don’t understand have a read of past posts.
http://multiple-sclerosis-research.blogspot.com/2013/09/what-does-black-swan-have-to-do-with-ms.html

But ProfG’s swan may be laying a big egg. The dots may not be CD20 the target for Ocrelizumab as Roche intended,

but seeds of discontent for alternative thought and the blobs of budding virus.

Epstein Bar Virus infects via a B cell marker and hides in memory B cells. This shows itself every so often, when the T cells can kick it’s butt. 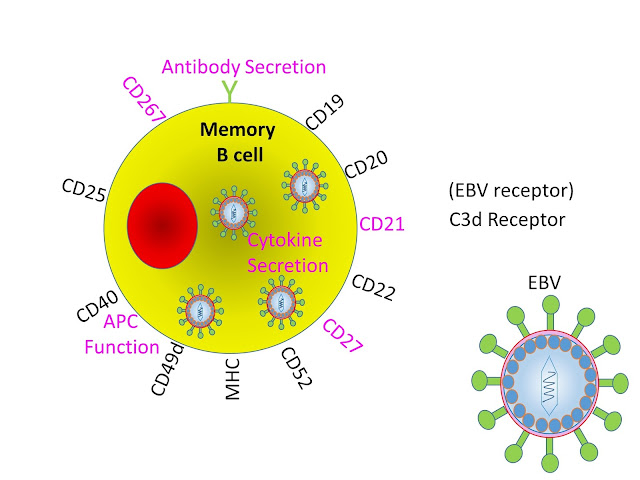 So we suggested rather than depleting B cells to treat MS, ocrelizumab may be destroying a virus factory. Indeed we said that all active MS drugs may be doing this. 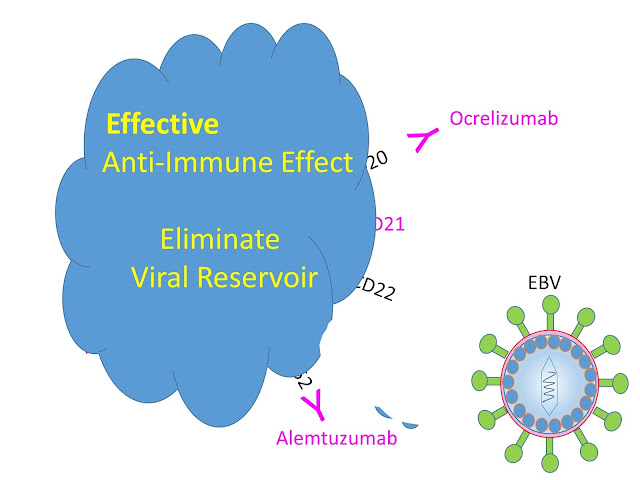 Is there evidence for this?


Do we do some work or just a bit of reading?

Objectives. Viruses may contribute to disease. This prompted us to monitor viral load and response to anti-CD20 therapy in patients.
Methods. Blood and bone marrow from 35 patients were analysed for CMV, EBV, HSV-1, HSV-2,parvovirus B19 and polyomavirus using real-time PCR before and 3 months after rituximab (RTX) treatment and related to the levels of autoantibodies and B-cell depletion. Clinical response to RTX was defined as decrease in the disease activity score (DAS) >1.3 at 6 months.

Results. Before RTX treatment, EBV was identified in 15 out of 35 patients (EBV-positive group), of which 4 expressed parvovirus. Parvovirus was further detected in eight patients (parvo-positive group). Twelve patients were negative for the analysed viruses. Following RTX, EBV was cleared, whereas parvovirus was unaffected. Eighteen patients were responders, of which 12 were EBV positive. The decrease in the DAS was significantly higher in EBV-positive group compared with parvo-positive group (P = 0.002) and virus-negative patients (P = 0.04). Most of EBV-negative patients that responded to RTX (75%) required retreatment within the following 11 months compared with only 8% of responding EBV-positive patients. A decrease of  Ig-producing cells and CD19+ B cells was observed following RTX but did not distinguish between viral infections. However, EBV-infected patients had significantly higher levels of Fas (Suicide molecule) -expressing B cells at baseline as compared with EBV-negative groups.

So what does this study show. You can have a look at a few graphs from the paper.

EBV was eliminated from by the treatment of rituximab. This would be consistent with the B cells being infected by EBV being depleted.

Those with the highest level of EBV showed the best response to therapy, compared to people who were so-called EBV negative (This proportion is too low compared to what we know of the normal population).

However, if we drive from London (Bone Marrow/Lymph gland) to Leeds (Brain) along the M1 motorway (blood) and we can see a car (B cell) if we have a look for a minute from a bridge over the motorway (blood test). If I drive my car (Pathogenic B cell) to York (Centre of Gods own Country about 200miles north) to cause the problem (MS), if you look at 3 in the afternoon you might see loads of cars but do it at 3 in the morning and you might not see any although the problem is indeed a car driving to York (a few miles from Leeds) along the M1 motorway.

The other problem is the treatment failure may be because the cells causing the failure are already in the brain and it is too late. In the ocrelizumab trials they re-baselined their results to allow 3 months
for the drug to work. A sensible thing to do if you are looking for efficacy.

However, you can also see that the bone marrow was not emptied by rituximab. If we look at other posts of rituximab, we can see that the lymph glands are not effectively depleted.

Similarly, levels of peripheral blood B cells were depleted by >94% for both subcutaneous and intravenous dosing.  B-cell levels were decreased by 57% (subcutaneous) and 42% (intravenous…so not that great) respectively. Yes this is in monkies but I could be bothered to go through 4000 references to pick a relevant human one.