No relevant impact of ambient temperature on disability measurements in a large cohort of patients with multiple sclerosis.

Many patients with multiple sclerosis (MS) report a worsening of symptoms due to high ambient temperatures, but objective data about this association are rare and contradictory. The aim of this study was to investigate the influence of ambient temperature on standard clinical tests.

A total of 1254 patients with MS (mean age, 42.7 years; 69.9% females; 52.1% relapsing-remitting MS, mean EDSS, 3.8) had 5751 assessments between 1996 and 2012. We observed a worsening in the T25FW with higher ambient temperatures in moderately disabled patients (EDSS ≥ 4) but not in less disabled patients. However, an increase of 10°C prolonged the T25FW by just 0.4 s. Other outcomes were not associated with ambient temperatures.

Higher ambient temperature might compromise walking capabilities in patients with MS with a manifest walking impairment. However, effects are small and not detectable in mildly disabled patients. Hand function, cognition, mood and fatigue do not appear to be correlated with ambient temperature.

The UK is infamous for its non-existent summers, hence the saying ‘enjoy your one week of summer’. Like most UK holiday-goers I chase the sun, but it goes without saying that I am also glad of the few weeks when its finally hot enough to complain about how hot it is back home! Granted, not a view shared by many PwMS. In one survey of 2500 PwMS, 70% reported worsening of MS symptoms after heat exposure (Simmons RD et al. Mult Scler 2004 p202).

The eponymous name for this phenomenon is ‘Uhthoff’s phenomenon’, described by Wilhelm Uhthoff in 1890 and is thought to be due to reduced conduction of nerve impulses in demyelinated nerves during high temperatures.

In this study, Stellmann et al. looked at various historical assessments in PwMS (1254 in total) in their clinical database and matched the date of each persons visit to the daily temperature on that day (at 1400h from the German weather service Deutscher Wetteerdienst).

They found that the EDSS score was not altered by temperature changes. However, for mobility tests the Timed 25 foot walk was influenced by temperature in those who were more disabled (i.e. EDSS>3.5), where each 10℃ rise in temperature prolonged the walking times by 0.35s (see figure below) or approx 4%. Interestingly, however, neither Nine hole peg test (which tests upper limb function) or cognition as measured by the Symbol digit modality test were influenced by temperature. This is good to know, although there is such a phenomenon called ‘heat stress’ which office workers are know to suffer from during the peak of summer.

The question is whether the lack of strong associations in this study is secondary to under powering (i.e. not enough people). The study group did analyze in around 800 patients recurrent visits where the temperature varied quite significantly (on average 14.5℃), but again found no association between the measures and temperature. Which begs the question, what makes walking or more pertinent the nerves supplying the legs more susceptible to temperature than the rest of the nervous system? Is it simply a length dependent phenomenon? 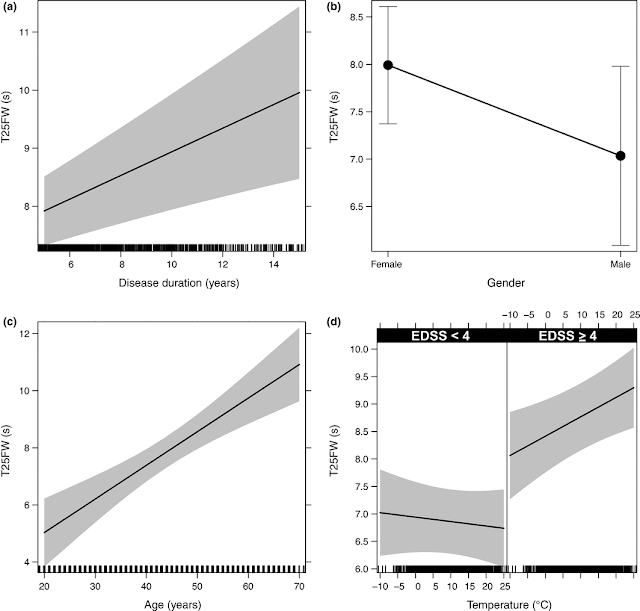