We are trying out ‘translating’ some of the posts on the blog so they’re accessible and understandable to a wider audience.

Memory B cells and MS
We have been saying that the MS drugs which seem to work the best, appear to deplete memory B cells the most.

Memory B cells are cells that have helped your body to fight infection. A number of them stay dormant in the body and remember the infection. They can fight it off when the infection returns to the body. The problem is that they can sometimes attack the body, instead of attacking infections. They can create cytokines, “baddies” that can help other cells to create MS, or stimulate T cells to do the business.

In the past Prof G has called this idea the ‘Black Swan Theory’ (here, here and here). It’s when something unusual or highly improbable occurs, and has the potential to have an enormous impact. For MS, that means that instead of MS treatments targeting T-cells, they should instead target Memory B cells. It’s a game-changer, because it suggests MS may be caused by a virus that hides in the memory B cells. Although some treatments currently do deplete Memory B cells, MS is still primarily thought of as a T-cell disease. 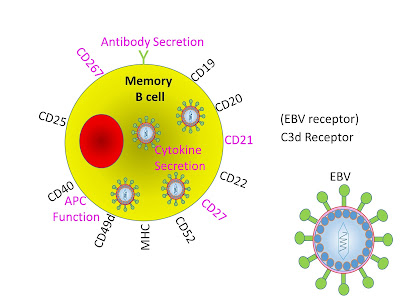 Is MS caused by a virus?

Epstein Barr Virus (EBV) hides in Memory B cells. It shows itself every so often, when the T cells can kick its butt.

We’ve suggested that ocrelizumab – in targeting B cells, may actually be destroying a “virus factory”. Indeed we’ve said that all active MS drugs may be doing this. Is there evidence for this?

In a study done on treating EBV with rituximab patients in a DIFFERENT disease, those with the highest level of EBV showed the best response to therapy, compared to people who were so-called EBV negative.

But the results didn’t show 100% response to the drug. Why? And why is it that some B-cell-targeting drugs don’t stop MS activity fully? The treatment failure may be because the cells causing the failure are already in the brain and it is too late. In the study, the bone marrow was also not emptied by rituximab. Other studies show rituximab does not effectively deplete EBV in the lymph glands.

What does this mean for MS treatments?