Grant Idea of the Month


As you know we give away our ideas on this blog so this month this is for the Mousers or maybe a clinical study.


When you make choices of treatments there are sites such as the MS trust Decisions web site. This needs abit of updating.


I expect they will be adding Ocrelizimab soon. 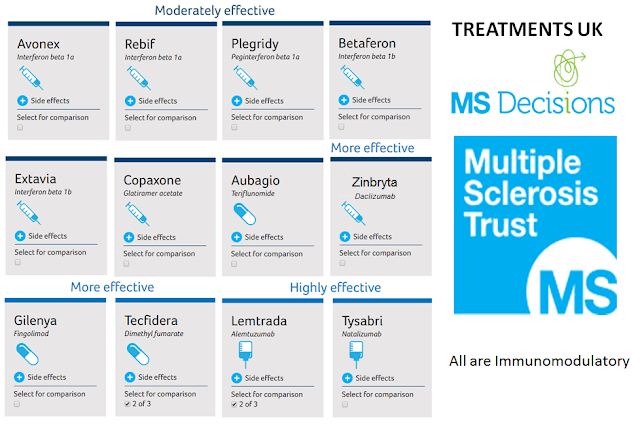 However there are a number of things that you have to think about when making a choice.   Depending on where you live, cost will come into play and whether your government/insurance will cover the cost. Many people in Low and Middle Income Countries make less in a year than the cheapest of the cheap and so get no access.


One would think that the International MS Federation would be pushing for access for “Treatment for All”, but where are we on that one?


But there are others to consider and this is how to do transition off a drug, in case it doesn’t work for you. 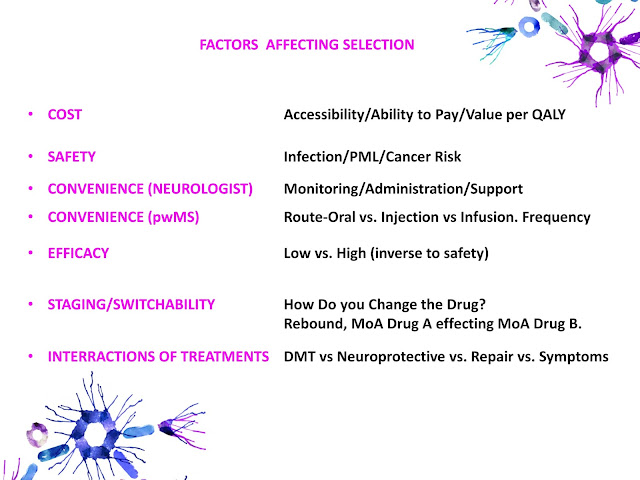 This can occur because they simply aren’t potent enough or maybe because you start to make neutralizing antibodies, which can stop protein drugs from working.


We have the problem of rebound for the anti-migration drugs. This is a well known problem with Natalizumab. It stops the cells from getting into the brain, but is not stopping what is driving their production. They are their waiting to get into the brain as the drug wears off . It is like having sprinters under starters orders ready to race into to your brain once the started gun goes off, there all arrive in the brain at once and this is a rebound (worse than just a relapse)
You switch after 24 months if you are JC positive.


When the depleting drugs fail the damaging cells will trickle out of the bone marrow/lymph glands into the blood, so the attack is not as intense as with a rebound atttack.


However, after some of the depleting drugs you don’t replete, how long do you wait before you start treatment again?

However, this rebound can be a problem for fingolimod, if this really is, an anti-migration drug. The cells are trapped in the lymph glands, (according to Dogma), but I would put money on the Bone Marrow (Site where immune cells are made) being equally if not more important, ready to get into the blood and ready to get into your brain.


If it is true that fingolimod can stops (in about 25% of people) alemtuzumab from working because it traps the white blood cells into places where the antibody does not deplete very well, then is this problem also going to happen with ocrelizumab too. Alemtuzumab and ocrelizumab both target the MS-causing cells and both deplete via the same mechanism (antibody-dependent cellular cytotoxicity). This means the antibody binds to the B memory cells (MS causing cell…if you are still a T cell fan read T cell here) and natural killer cells and neutrophils bind to the antibody and relate their contents, which puts holes in the B cells and kills the memory B cell.


Can the killer cells get into the bone marrow and lymph glands to do this killing?  Not as well as it gets in the blood.


I don’t know the ocreliziumb data, but we do know about rituximab.
We need to see the data in the humanised CD20 mouse and see if they use complement (A set of proteins that punch holes in cells, abit like the Killer cells) to kill, which Alemtuzumab didn’t.


To do this you use Cobra Venom and that depletes complement. simples, we could block ADCC.

Alemtuzumab kills natural killer cells (~40%), so it could be different from ocrelizumab in this respect but we need to be be vigilant and monitor for this.


So will fingolimod interfere how CD20 depleting drugs work?
We know there are people who have done this with rituximab


P.S. Happy to do this study, if you are interested.