Two hallmarks of chronic multiple sclerosis lesions are the absence of significant spontaneous remyelination and primary as well as secondary neurodegeneration. Both characteristics may be influenced by the presence of inhibitory factors preventing myelin and neuronal repair. We investigated the potential of antibodies against Nogo-A, a well-known inhibitory protein for neuronal growth and plasticity, to enhance neuronal regeneration and remyelination in two animal models of multiple sclerosis. We induced a targeted experimental autoimmune encephalomyelitis (EAE) lesion in the dorsal funiculus of the cervical spinal cord of adult rats resulting in a large drop of skilled forelimb motor functions. We subsequently observed improved recovery of forelimb function after anti-Nogo-A treatment. Anterograde tracing of the corticospinal tract revealed enhanced axonal sprouting and arborisation within the spinal cord gray matter preferentially targeting pre-motor and motor spinal cord laminae on lesion level and above in the anti-Nogo-A-treated animals. An important additional effect of Nogo-A-neutralization was enhanced remyelination observed after lysolecithin-induced demyelination of spinal tracts. Whereas remyelinated fiber numbers in the lesion site were increased several fold, no effect of Nogo-A-inhibition was observed on oligodendrocyte precursor proliferation, migration, or differentiation. Enhancing remyelination and promoting axonal regeneration and plasticity represent important unmet medical needs in multiple sclerosis. Anti-Nogo-A antibodies hold promise as a potential new therapy for multiple sclerosis, in particular during the chronic phase of the disease when neurodegeneration and remyelination failure determine disability evolution 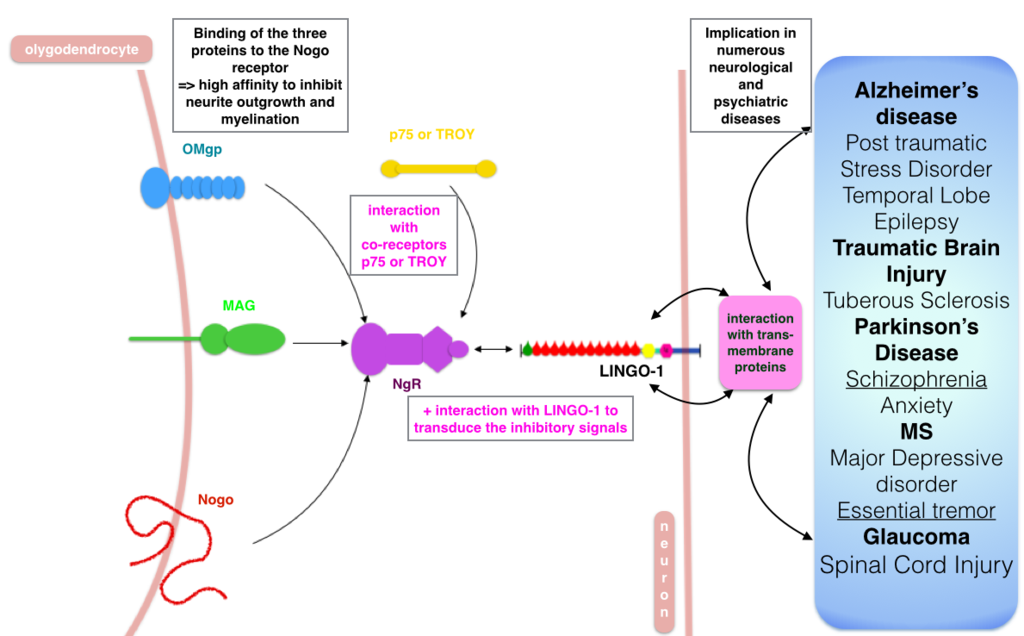 You may have heard of LINGO-1 which is the target for remyelination that has been tried in MS by Biogen. This is related to NOGO (it was a no go signal, i.e. stop signal for nerve grow in the central nervous system). Block it and nerves grow). NOGO is also known as reticulon 4.

NOGO variants are derived both from differential splicing and differential promoter usage and encoding different isoforms have been identified. There are three variants: Nogo A, B and C. Nogo-A has two known inhibitory bits including amino-Nogo, at the beginning of the molecule and Nogo-66, which makes up the molecules extracellular loop. Both amino-Nogo and Nogo-66 are involved in inhibitory responses, where amino-Nogo is a strong inhibitor of neurite outgrowth, and Nogo-66 is involved in  destruction of  the growth cone from where nerves grow.

LINGO-1 is a co-receptor that interacts with the ligand-binding Nogo-66 receptor (NogoR) in the Nogo receptor signaling complex.The Nogo receptor complex is formed when Nogo-66 binds to its receptor. LINGO-1 is an essential negative regulator of myelination. It has been implicated in the inhibition of axon regeneration through a ternary complex formed with NgR1/Nogo-66 (ligand-binding subunit) and p75 (signal transducing subunit). NgR1 relies on its co-receptors for transmembrane signalling.The three major myelin-associated inhibitory factors are Nogo, oligodendrocyte myelin glycoprotein, and myelin-associated glycoprotein which all share this receptor complex.
The inhibitory action is achieved through RhoA–GTP upregulation in response to the presence of MOG, MAG or Nogo-66 in the central nervous system. LINGO-1 also inhibits oligodendrocyte precursor differentiation and myelination, by a mechanism that also involves activation of RhoA, but which apparently does not require p75 or NgR1.

This paper reports that if you block NOGO-A it can have two effects it supports a nerve sprouting effect and it can speed up remyelination. This is great

However now to burst the bubble abit. “Anti-Nogo-A antibodies hold promise as a potential new therapy for multiple sclerosis”.

This study shows what I was saying on saturday about trials in progressive MS. It says that if you do not have a trial system that can detect change than it doesn’t matter what your drug does, it won’t work.

This paper intimates that blockade of NOGO-A can affect the disease course of EAE, we looked at this in EAE in ABH over a decade ago and it did absolutely nothing…why would it the disease episode in EAE has little to do with nerve loss or demyelination it is inflammatory.

(Why did we not publish this? it was company sponsored and one experiment does not make a paper).

Anyway, others also eventually reported it was not much or an immune modulator.

So back to the current paper the authors are spinal injury people and so they do their work to show sprouting and so the trial is fit for purpose but if you do EAE a 2-3 week EAE experiment you are looking at three things at once where the immune arm dominates so it is not the right stage of the model to look for repair. So bad trial  design means drug fails.

Away use in spinal injury would be system to test this out. Where is anti-NOGO in development?

Now the real problem anti-LINGO shows us that 99.9% of your drug never gets to the target meaning you load up you subjects with loads of protein, meaning placebo of nothing is flawed. You need a chemical not an antibody.

If blocking the NOGO receptor is going to work wonders, why did this not occur in the anti-LINGO trials in MS? This is because anti-LINGO works on the same cascade and also promotes sprouting in animal models. So let’s be realistic. Will anti-NOGO get developed in MS, I think the patent life must be about dead and companies would have done it years ago it they thought it was a winner.

The NOGO system was evolved because it was advantageous not to regrow nerves in the central nervous system. What will be the consequences of blocking the biology?

I guess you will not have to wait to find out nerve re-growth is being investigated…..but that’s another story