There are small conductance, intermediate and big conductance calcium activated potssium channels called the SK channels and the BK channels.

The SK channel family contains 4 members – SK1, SK2, SK3, and SK4. SK4 is often referred to as IK (Intermediate conductance) due to its higher conductance 20 – 80 pS 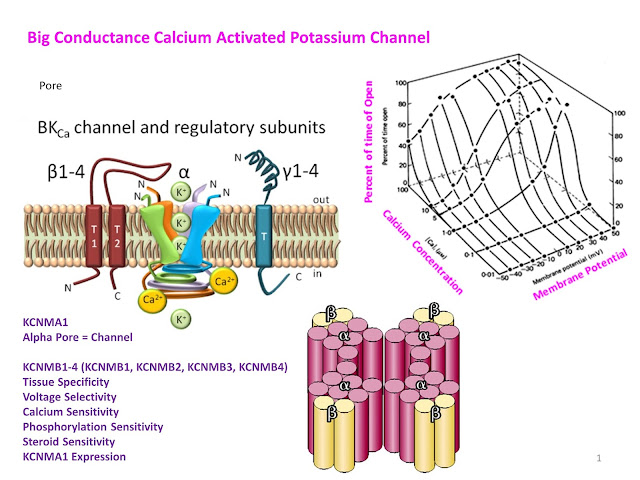 The Pore is a potassium channel formed from four alpha molecules made from the KCNMA1 protein.


This occurs in the relative absence of the other molecules, but often the 4 alpha proteins are associated with 4 beta molecules of this there are 4 beta subtypes KCNMB1, KCNMB2, KCNMB3, KCNMB4.


These beta subtypes are expressed by different cell types, such that the KCNMB1 is expressed by smooth muscle around arteries, the KCNMBA2 and KCNMBA4  are predominant in nerves and the KCNMB3 is found in the testis…yep sperm have to move.


We heard yesterday that the so called CB3 was BKCa, but between you and me, there was some confusion but this may be because there were two BK channels subtypes in the tissues being assayed to detect CB3 (in the third branch of of the arteries in the gut…. don’t ask me why) one in the smooth muscle surrounding the blood vessel and another subtype in the blood vessel (endothelial cells)


If you have a mutation in the neural channel you get seizures and autistic behaviours. But open it and you can save nerves. Maybe something for MS.