Objective: To understand the efficacy of cladribine (CLAD) treatment in MS through analysis of lymphocyte subsets collected, but not reported, in the pivotal phase III trials of cladribine and alemtuzumab induction therapies.
Methods: The regulatory submissions of the CLAD Tablets Treating Multiple Sclerosis Orally (CLARITY) (NCT00213135) cladribine and Comparison of Alemtuzumab and Rebif Efficacy in Multiple Sclerosis, study one (CARE-MS I) (NCT00530348) alemtuzumab trials were obtained from the European Medicine Agency through Freedom of Information requests. Data were extracted and statistically analyzed.
Results: Either dose of cladribine (3.5 mg/kg; 5.25 mg/kg) tested in CLARITY reduced the annualized relapse rate to 0.16–0.18 over 96 weeks, and both doses were similarly effective in reducing the risk of MRI lesions and disability. Surprisingly, however, T-cell depletion was rather modest. Cladribine 3.5 mg/kg depleted CD4+ cells by 40%–45% and CD8+ cells by 15%–30%, whereas alemtuzumab suppressed CD4+ cells by 70%–95% and CD8+ cells by 47%–55%. However, either dose of cladribine induced 70%–90% CD19+ B-cell depletion, similar to alemtuzumab (90%). CD19+ cells slowly repopulated to 15%–25% of baseline before cladribine redosing. However, alemtuzumab induced hyperrepopulation of CD19+ B cells 6–12 months after infusion, which probably forms the substrate for B-cell autoimmunities associated with alemtuzumab.
Conclusions: Cladribine induced only modest depletion of T cells, which may not be consistent with a marked influence on MS, based on previous CD4+ T-cell depletion studies. The therapeutic drug-response relationship with cladribine is more consistent with lasting B-cell depletion and, coupled with the success seen with monoclonal CD20+depletion, suggests that B-cell suppression could be the major direct mechanism of action.

Today some people are in for a shock and surprise.

ProfG,s phone will be ringing with some irate Pharma person to say “Can’t you keep your lot in check”.

However, this is not the phone number pharma needs, as this was never in ProfGs hands to control. Prof G is too conflicted to be involved directly.

This study was done through Freedom of Information requests to get access to “public documents”. DrK must take credit for this innovation. The European Medicines Agency supplied the information.

However, this study says that pharma can no longer sit on data.

Information on licenced products can be found and obtained. 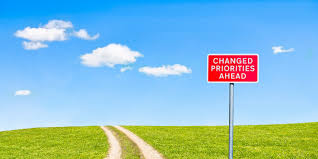 Now Pharma have signed up to transparency and openness and we (scientists) can get access to this data via legitimate routes.

Some pharma have asked for 18 months to publish papers, so for ocrelizumab the clock is now ticking.

We will know the data that pharma have, and if they don’t publish it. Should it not be fair game?


Only scientists may not spin the data the way pharma wants it spun, so it is in their interest to come clean and come clean quickly.

So now is no longer the time to publish an abstract at ECTRIMS or the AAN and never publish the data, as pharma have been doing.

We say please publish the data so we can all read it, not some inner sanctum of neurologists,  who can say “we know that already”…because the majority don’t know that.

The data presented here was in the hands of pharma and presented by other people (academics) in 2009 (cladribine) and 2012 (alemtuzumab). So it is not that it hasn’t been put in the public domain, so there should be no shocks.


The data however is not easy to find and is not easily searchable.

Those people will no doubt be upset by this publication, including ProfG.

However, they have have had 5-8 years to request and demand to publish the data.

Academics were happy to put their name to an ECTRIMS and AAN meetings, but obviously could not be bothered to pursue this, when cladribine was dropped in 2011.

So whilst we may be written-off some peoples Christmas card list, they can blame no-one, but themselves.

However, by 2011 Merck Serono had pulled the plug and stopped production of their licenced product, Movectro (€20,000 p.a.) making money in Australia and Russia.

This was done after the EMA had said that there was not enough evidence to prove efficacy and because of safety issues they needed another trial.

Why did they not bite the bullet and do it?

In my opinion, a mistake was made.

Merck had reportedly spent millions developing a cladribine prodrug that could be eaten and then turn in to bog- standard generic cladribine, which can be bought for £165/10mg (in UK).

But they had lost out to Novartis, to be the first oral drug to work in MS. So they flushed it all down the toilet.

However, take one step back and do a bit of analysis and you could see that the safety issue was likely to be a statistical fluke, it meant that generic cladribine, works and a treatment solution for all. The risks from cladribine were in the same ballpark as with other agents.

Move  5 years on, the cancer risk was no greater than that with ocrelizumab, that sailed through the regulators and the leucopenia risk is inherent in the mechanism of action so hardly an unexpected adverse event and as can be seen, nowhere near that caused by alemtuzumab.

So we went to the MHRA (medicine agency in the UK) in 2013 to see what it would need to develop generic cladribine.

They said you have to do two trials just like pharma, but as the oral drug activity was based on the doses from the injectable form, if we could get the CLARITY trial data, that is the whole data set and not the published paper that would count as one trial. We would only have to do one more.

So we went to Australia to get the information, but the request was refused. We then went to the European Medicine Agency to get the data set and they refused too. This was probably because they were being sued by some small pharma company about releasing this type of information. However, the case was dropped and we went straight back to the EMA. They came back and said what do you want?

We got some documents with thousands and thousands of pages of information.

We used some very bright students and the QMUL computing facility to convert the text document into spread sheets and we could analyse what we liked. We could see all of the safety data too.


Obviously the main findings were published by ProfG, but what was not published?

We found some things notably the phenotyping data reported here.

So what did we find in this study?

There were two doses used but both doses worked, what was similar about the two?

We looked in the blood and that is what we saw. The white blood cells got it and maximum death of the white cells occurred by about 3 months after the course lasting a 5 weeks with drug taken on week 1 and 5.

This is interesting because when we look up at the follow on trial of people converting from optic neuritis to definite MS after oral cladribine, there was a failure from month 0-3 and then the conversion to MS flat lined. After 4 months even better. 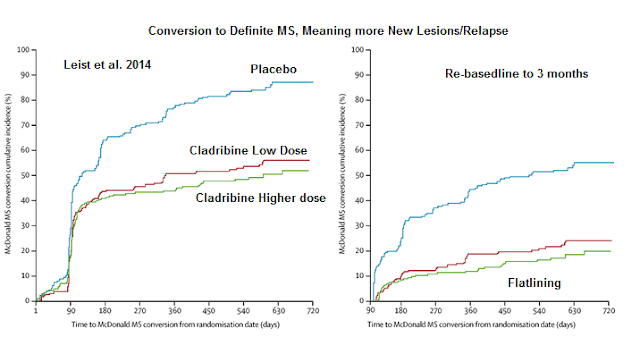 When we looked at T cells there was a dose-response and the higher dose, depleted more T cells.  However, as we knew that the drug worked within one year and within the first year the depletion of CD4 T cells was about 40-50%. This was well below the amount of depleting that failed in clinical trials with CD4 depleting antibody.

Looking at the depletion of  CD8 T cells and that was only 15-25% which in our opinion was too low. But a good sign as it may not be enough to stop removal of JC virus and so PML formation should be avoided.

However when we saw the effect on B cells both doses behave the same and there was marked inhibition CD19 B cell numbers.

There was a drop in natural killer cells and these cells are known to control the occurrence of cancers, so we need ensure that people are monitored in the longer term to see what cancers arrive.

How does this compare to other drugs, we had done it once already so why not go back to the EMA?

This is what we did and this time got the alemtuzumab CARE-MS I and CARE-MS II data. Unfortunately, the documents contained names, which had to be redacted page by page. Eight months later, and we are still getting the data bit by bit. Some poor sod is doing this in their freedom of information office, they must hate Genzyme or maybe people in Genzyme doing the redacting hate others in Genzyme:-)


Maybe this exercise will teach them (EMA) to ask for information in a certain format.

However, what was different between cladribine and alemtuzumab.

Alemtuzumab wiped out T cells (CD4 and CD8) and not much of natural killer cells. However B cells were again depleted markedly.

Was this the common link?

We looked into the Alem data further and compared it to what was published and we said 1 + 1 =  B cells. They are the problem.

We could show that disease activity did not relate to T cell or total B cell numbers.

The referees had problems with this (see above)

This little exercise made us realise that the B memory cell is probably important for disease monitoring.

There was also more gold in these documents that have been not been reported.

This made us push the UK government to clarify that UK doctors could prescribe what they like. They did not need the off-label licensing bill, which failed in the end of 2015, to prescribe generic cladribine.

We dropped our plans to try do a head to head trial with generic cladribine in RRMS, it was too expensive at £4,000,000 for the UK research budget coffers. However, it would have saved the NHS £32,000,000 if they had supported the study across 30 centres (who had signed up to do the study) in the UK.

Now Merck is trying to bring oral cladribine back, and we have done them a favour. Why. Now they don’t have to pay a medical writer to write up the results and furthermore they wouldn’t have compared it to alemutuzmab.


In the 2009-2010 era we know they would have put a T cell spin on the data…we have seen the video (ProfG put links to it on the blog).
Anyway we killed off the white knights (read the post in the link below) and their attempt to do the second trial in relapsing MS.

However, you can see the White Knight dreaming of an Arabian Knight and a Chariot in his death throws.

Actually it was a Persian Knight but that’s another story,

We have also attempted a Mexican Knight. 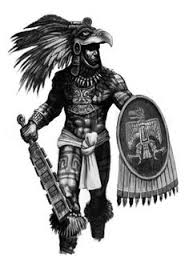 but the UK and the US don’t care enough about people in Mexico (OK maybe the grant wasn’t right but we tried) to let them have any access to a treatment that works. Yes I accept there were other reasons too


Neuros in Mexico had done trials done with pharma, but we built a network in Mexico that have access to thousands of untreated patients, and who would help provide infra-structure to do such a study. Our Mexican Neuro has gone back to Mexico and time to activate this is slipping away.


However, to get back to the UK. Following the green light from the Government Ministers, we have begun to treat people with generic cladribine to give all people with MS an option.

Therefore, the data and the safety data held within the EMA document was very useful in the process of helping us to understand how best to use cladribine off-label for our patients.

We can use our experience to try help Merck make better use of their new drug and we will probably show how cladribine really works, we think we have the answer already…You know what it is is too, if you have been reading the blog.


We are still hoping that we can get  CHARIOT (trial in people in wheelchairs) off the ground, as these is an unmet need.