Oligodendrocytes down regulate most of their potassium channels 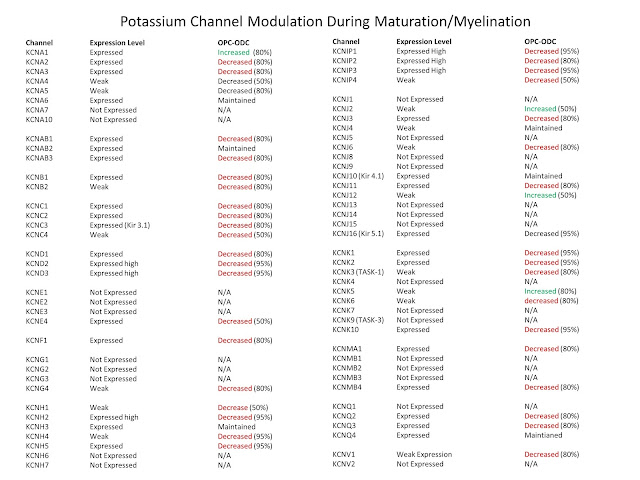 However one channel reported to be of interest is the TASK-1 channel. This also known as Potassium channel subfamily K member 3 encoded by the KCNK3 (or K2P3.1), one of the members of the superfamily of potassium channel proteins containing two pore-forming P domains.


K2P3.1 is an outwardly rectifying channel that is sensitive to changes in extracellular pH (acidity-alkalinitiy) and is inhibited by low pH (acidity).  It is known as a “Leak” channel that sets the membrane potential (the difference in voltage between the outside and inside of the cell). Potassium tends to leak outwards. However, when there is a strong depolarising signal the potassium will move inwards to increase the potassium. We saw the other day that this can be bad news.

So in this situation when you have ischaemia/ischemia (or lack of blood supply and lack of oxygen) and damage to oligodendrocytes, they found that if they block TASK-1 potassium channels they can limit oligdendrocyte death.


The problem is that they used anandamide (endogenous cannabinoid) and methanandamide (a metabolically stable version of anandamide that is not destroyed in the body like anadamide is within a few minutes. However this says that anandamide can save oligos. It can also save nerves, but that’s another story, which we tell you later.


However, is this how anandamide works?…after all its a dirty drug, with more than one target.