It has been ~5 years since I approached Genzyme with a hypothesis to derisk alemtuzumab. I first posted on the topic of derisking alemtuzumab on the blog in 2014. I discussed derisking infusion reactions and secondary autoimmunity.

To reiterate my position is that once oral cladribine and ocrelizumab are launched most thinking pwMS and neurologists will have a hard time justifying taking the risks of alemtuzumab. Why? You get similar efficacy from ocrelizumab, a maintenance treatment, and if you want to go the PIRT (pulsed immune reconstitution therapy; previously referred to as an induction therapy) route cladribine is much safer than alemtuzumab. With cladribine you get no secondary autoimmunity, no infusion reactions and much fewer infections because cladribine doesn’t take-out innate immunity or deplete T-cells to the same degree as alemtuzumab. Cladribine also has the advantage of being oral and its monitoring requirements are so much less arduous. The bottom line is would you go into a randomised trial of alemtuzumab vs. alemtuzumab plus a second agent to try and prevent secondary autoimmunity or would you choose ocrelizumab or oral cladribine? I suspect you would choose one of the latter two options. This means we will have lost equipoise and our proposed trial(s) will be unethical.

The immune system has many mechanisms in place to prevent autoimmunity. When you learn how the immune system works it is really quite surprising that autoimmunity is so uncommon. What the immunologists tell us is that there must be a series of underlying biological processes that are causing secondary autoimmunity and if we can work out what these are we can intervene and prevent this complication. This is what the Professor Alasdair Coles, and Dr Joanne Jones, have been trying to do in Cambridge. They think that because the immune system reboots itself from peripheral memory cells it is more likely to result in an aberrant autoimmune responses. They have done a trial to encourage rebooting of the immune system using more naïve cells from the thymus. They have treated MSers after alemtuzumab with a hormone called, Palifermin, that stimulates the thymus to produce more naïve T-cells. The study is called the Cam-Thy study.

Importantly, when you compare cladribine, another immune system rebooter, with alemtuzumab you can’t help but notice that the B-cell reconstitution profiles are very different. With alemtuzumab they come back very quickly and overshoot their baseline values. We have hypothesised that if you changed the profile of the B cell reconstitution with a small dose of the B cell depleting antibody rituximab you may be able to prevent this secondary autoimmunity. We are really talking about a very small dose of rituximab, i.e. 50-100mg, just enough to allow to delay B cell reconstitution by 4-6 months. This is the concept trial that Genzyme rejected several years ago. 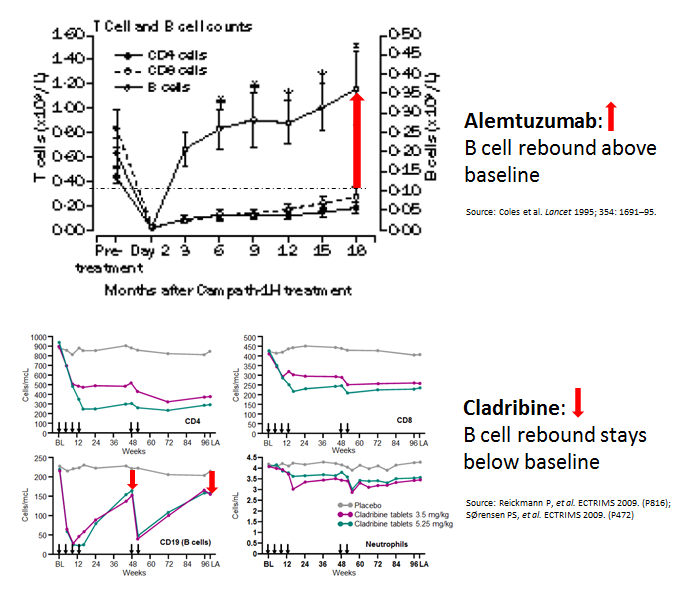 IMPORTANCE: Alemtuzumab, a CD52-depleting monoclonal antibody, effectively inhibits relapsing multiple sclerosis (MS) but is associated with a high incidence of secondary B-cell autoimmunities that limit use. These effects may be avoided through control of B-cell hyperproliferation.


OBJECTIVE: To investigate whether the data describing the effect of alemtuzumab on lymphocyte subsets collected during the phase 3 trial program reveal mechanisms explaining efficacy and the risk for secondary autoimmunity with treatment of MS.

DESIGN, SETTING, AND PARTICIPANTS: Lymphocyte reconstitution data from regulatory submissions of the pivotal Comparison of Alemtuzumab and Rebif Efficacy in Multiple Sclerosis I and II (CARE-MS I and II) trials were obtained from the European Medicines Agency via Freedom of Information requests. Data used in this study were reported from June 22 to October 12, 2016.

MAIN OUTCOMES AND MEASURES: Tabulated data from T- and B-lymphocyte subset analysis and antidrug antibody responses were extracted from the supplied documents.

RESULTS: Alemtuzumab depleted CD4+ T cells by more than 95%, including regulatory cells (-80%) and CD8+ T cells (>80% depletion), which remained well below reference levels throughout the trials. However, although CD19+ B cells were initially also depleted (>85%), marked (180% increase) hyperrepopulation of immature B cells occurred with conversion to mature B cells over time. These lymphocyte kinetics were associated with rapid development of alemtuzumab-binding and -neutralizing antibodies and subsequent occurrence of secondary B-cell autoimmunity. Hyperrepopulation of B cells masked a marked, long-term depletion of CD19+ memory B cells that may underpin efficacy in MS. CONCLUSIONS AND RELEVANCE: Although blockade of memory T and B cells may limit MS, rapid CD19+ B-cell subset repopulation in the absence of effective T-cell regulation has implications for the safety and efficacy of alemtuzumab. Controlling B-cell proliferation until T-cell regulation recovers may limit secondary autoimmunity, which does not occur with other B-cell-depleting agents.