However, try publish this idea and you run into the academic T cell brigade.


They, like me, have made their careers on T cell research and they are going to look for as many holes in your B cell ideas as possible.


We were surprised the manuscript was not rejected, one referee wanted us to do more work, which was impossible to do.


We addressed the comments as best we could , but the manuscript was sent back a second time with these comments.
“CLAD in comparison to ALEM shows less relative reduction in T cell numbers and a pronounced effect on B cells, nevertheless the treatment effects might still be attributable to the selective depletion of hazardous T cell subsets. The authors already provide a respective paragraph in the discussion, however still hypothesizing that B cell depletion might be the central mechanism of CLAD. I would appreciate the authors to discard these speculations“.


Now I ask you to look at the data, it is open access after all, you know that both doses do the same thing, what is you attention drawn to?

Why discard the speculation? Given that it is the most obvious part of the results? Discussion is about speculation.

Referees are usually anonymous. as it allows you to say stuff that you may be frightened to say particularly as some people have the power to influence your career.


However, sometimes the references mentioned add little new insight or opinion and the papers they want citing and the ideas being mentioned all seem to come from the same lab.


Some people, are so desperate to increase their H index (a marker of esteem), which is a measure of who many times your papers have been cited, so refereeing papers is a good opportunity to increase your H factor.

Is this the actual referee. I don’t know, but one suspects this
No one else would make you only quote one lab.


(a) Had consultancies with both companies (Merck and Sanofi-Aventis) on the topic of the work. These are easy to find you just look as the disclosures in ECTRIMS abstracts.


(b) Trying to do the B cell studies on these drugs.

Is this why we should not mention anything or speculate?

Do we enquire with the journal to see if the referee disclosed these obvious conflicts of interest.
So thanks to the Team for asking me to take a chill pill and re-write the response after I had slept on it.

The papers below are relatively revoluntionary as takes control of the information out of the companies hands, and it tells you how to do it. It’s not in company interests for this to happen.

So they will be a bit miffed today.

The papers below says you can’t sit-on data forever.


The company published abstracts on this at ECTRIMS 9 years ago (Cladribine) and 5 years (Alemtuzumab) ago.  They had analysed the data and this is surely-more than enough time for the data to surface.


So should we feel sad about the authors of those abstracts being miffed that the data now surfaces and their chance of a paper decreases. Steam will be coming from their ears.

But well done to DrK for the idea. We believe this data will tell us how these drugs work and how they can be used more safely

The review process should be about constructive criticism not preventing others work from surfacing. 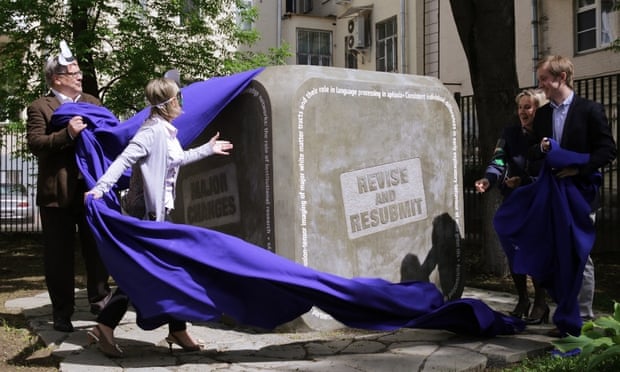 The 1.5-tonne die is the result of a crowdfunding campaign that drew support from a host of researchers.  The project was predicted to cost about $1,300, with backers receiving rewards ranging from normal-sized replica dice, to having the title of one of their papers recorded on one of the monument’s sides. Watch the video


Don’t donate it has all be done.


However, the wait over on this one,

CoI: DrK multiple.
ProfG multiple but had no part in this  (below) manuscript (Too conflicted).