IMPORTANCE:Alemtuzumab, a CD52-depleting monoclonal antibody, effectively inhibits relapsing multiple sclerosis (MS) but is associated with a high incidence of secondary B-cell autoimmunities that limit use. These effects may be avoided through control of B-cell hyperproliferation.OBJECTIVE:To investigate whether the data describing the effect of alemtuzumab on lymphocyte subsets collected during the phase 3 trial program reveal mechanisms explaining efficacy and the risk for secondary autoimmunity with treatment of MS.DESIGN, SETTING, AND PARTICIPANTS:Lymphocyte reconstitution data from regulatory submissions of the pivotal Comparison of Alemtuzumab and Rebif Efficacy in Multiple Sclerosis I and II (CARE-MS I and II) trials were obtained from the European Medicines Agency via Freedom of Information requests. Data used in this study were reported from June 22 to October 12, 2016.MAIN OUTCOMES AND MEASURES:Tabulated data from T- and B-lymphocyte subset analysis and antidrug antibody responses were extracted from the supplied documents.RESULTS:Alemtuzumab depleted CD4+ T cells by more than 95%, including regulatory cells (-80%) and CD8+ T cells (>80% depletion), which remained well below reference levels throughout the trials. However, although CD19+ B cells were initially also depleted (>85%), marked (180% increase) hyper-repopulation of immature B cells occurred with conversion to mature B cells over time. These lymphocyte kinetics were associated with rapid development of alemtuzumab-binding and -neutralizing antibodies and subsequent occurrence of secondary B-cell autoimmunity. Hyperrepopulation of B cells masked a marked, long-term depletion of CD19+ memory B cells that may underpin efficacy in MS.CONCLUSIONS AND RELEVANCE:Although blockade of memory T and B cells may limit MS, rapid CD19+ B-cell subset repopulation in the absence of effective T-cell regulation has implications for the safety and efficacy of alemtuzumab. Controlling B-cell proliferation until T-cell regulation recovers may limit secondary autoimmunity, which does not occur with other B-cell-depleting agents.


Read the Paper it is still free to read, download now.


Today we continue to describe the paper


We have reported that alemtuzumab causes long-term depletion of CD4 T and B memory T cells, but not the immature B cells.


Remember the suggestion that B cells go back to normal is misleading. They don’t.

When you read the literature and now you also have the trial data it is evident that in contrast to the assumption that T regulatory cells increase after alemtuzumab, their absolute number decrease so there are few around within the first few months after alemtuzumab treatment.

1. Using animal studies we have demonstrated two things: CD52 depletion does not clear B cells out of lymph glands as well as it does the blood.  This depletes a population of CD8 regulatory cells that prevent immune tolerance induction, which may allow autoimmunity to develop.

Animals studies with alemtuzumab in human CD52 transgenic mice goes further and shows that it does not deplete cells from the bone marrow (BM or even the spleen) very well. 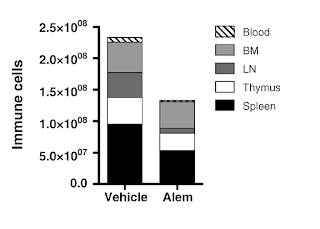 The suggestion is that this occurs in humans also

2. In contrast to the suggestion that CD4 T regulatory cells increase, as we saw yesterday they actually decrease. In the
phase III study this depletion was by about 85-90%, confirming the decrease.


CD4 T reg cells often work by cell-cell contact therefore there are few to control the autoimmune immature B cells generated in the bone marrow.

3. During this time, because alemtuzumab does not deplete B cells from the bone marrow as well as it could. There are lots of immature B cells waiting to stream out of the bone marrow to repopulate the blood. It is known from a number of other studies that when immature B cells develop in the absence of T regulatory cells then autoantibodies (autoimmune antibodies that react to your own tissues) are formed because the autoreactive B cells are not kept in check.


This idea was ignored because the people had the idea (have been given the idea) that T regulatory cells were increasing in number.

If you have a natural defect in regulatory T cells, ITP (autoimmune disease of platelets that stop blood clotting) develops…This is one of the problems with alemtuzumab treatment and is the reason why you have to have your bloods screened every month for 4 years after your last dose of alemtuzumab.

4. This lack of control of immunity due to lack of CD8 suppressor cells and CD4 regulatory T cells (a) Allows the secondary B cell autoimmunities to develop


In terms of  secondary autoimmunities the 5 year data is known for the CARE-MS I/II studies.


In the regulatory submission the occurence of secondary autoimmunities was presented of what occured during the trials. Has this presented at the AAN 2016 . 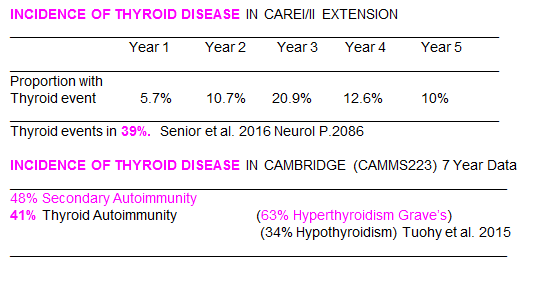 (b) This allows anti-drug responses to develop too.

5. Autoantibodies do not typically form during the period of B cell expansion and require many months to a few years to develop. This is because these are going to be CD4 T cell dependent antibodies and so without T cell help for the B cells, they can’t produce their antibodies. These T cells recover 6 months to 3 years after depletion. So this is why it takes time for autoimmunities to develop 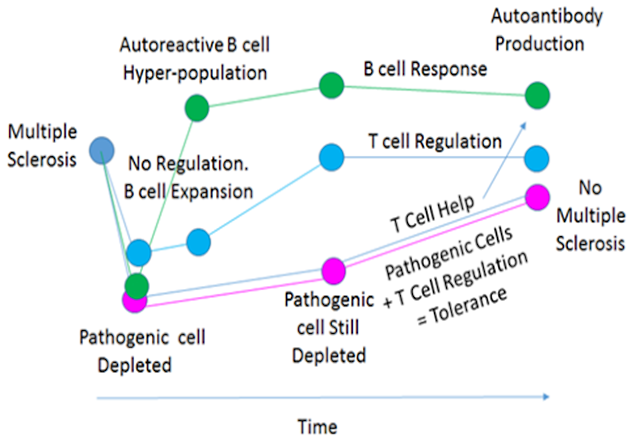 6. T regulatory function and CD8 T cell numbers will recover and probably do so at a faster rate that the memory B cells (or memory T cells) , so when they come back the immune regulation is in place and is active and so can stop autoimmunity in MS from recurring and so induce an induction-like treatment requiring few treatment cycles).


What are the Implications?


In the paper we suggest that the issue for autoimmunity is due to a marked B cell response in the absence of T cell regulation. We therefore hypothesised that a treatment approach based on T cells may fail.

It has been suggested that the problem of autoimmunity is because cells that recover after alemtuzumab have restricted clonality (restricted diversity) as the memory T cells are expanding. Therefore, it was proposed that driving re-population via the thymus, to create a diverse T cell response would limit this.

Based on the data we presented in the new paper the expansion of memory T cells is a relative phenomenon and their actual number drops remarkably.

We had seen this phenomenon in our mice after CD4 T cell depletion and with a bit of reading, it looks like that when-ever T cells are depleted, this apparent memory cell expansion relative to naive cells occurs. However, this does not cause secondary autoimmunities.


I tell you this because the trial to promote T cells coming from the thymus was done.

Keratinocyte Growth Factor was trialed to drive T cells via the thymus to Prevent Autoimmunity After Alemtuzumab Treatment of Multiple Sclerosis (CAM-THY), (NCT01712945)

However the solution we would suggest is that if you limit the hyper-repopulation of B cells until T regulation occurs then it may stop the autoimmunity from developing.

We proposed doing such a study about 3 years ago using low-dose rituximab to deplete B cells, which would target the immature and mature B cells. When rituximab is used sometimes it is given as a split dose at baseline and 1 month later. So ritiximab after alemtuzumab. There was no enthusiasm for this approach. I wonder if  that is because it uses another companies drug.

Some people think that long-term B cell depletion leaves you at risk of infection, so you would want a trial to show it is safe before we can recommend such an approach.

What about teriflunomide after alemtuzumab? As teriflunomide kills proliferating cells it could stop the repopulation of cells making you permanently leukopenic,and stopping the T regs from repopulating, whilst you are on the drug. risking infections and perhaps even PML, so maybe less safe. Again this would need to be trialed

However the landscape may change or has changed. Ocrelizumab has arrived in the USA and will, I predict, arrive in Europe. Oral cladribine may arrive too, so have we missed the window to try a treatment to limit alemtuzumab-induced autoimmunities?
Would you go on a trial to try reduce the autoimmunity? or is ProfG  right to suggest that it may become a drug of last resort?