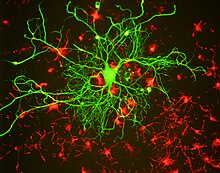 When nerves are damaged they breakdown and release their contents and these products are measured as a marker of disease activity. However, it is clear that neurofilament directed antibodies are generated to clear up these breakdown products.

We have shown that if you cause the antibodies to be produced in mice that they can cause neurological problems.

This study shows that these antibodies, however can be potentially damaging and so clearly shows there is autoimmunity occurring in MS. In this study neurofilament specific antibodies were injected into animals and it made EAE worst, once T cells had opened the blood brain barrier to allow the antibody to enter the brain. This was not surprising as this has been shown with a number of antibodies. More surprisingly when injected directly into the brain these antibodies caused signs of disease. It was surprising because neurofilament is inside a nerve and so would not be easily assessable.  The signs occurring were very different to the signs occurring when antibodies targeting basal ganglia from a person with a tic disease was injected into the brain.

These neurofilment directed antibodies can kill nerves and so could contribute to damage in MS.


CoI. This is work bt TeamG