Hospitalization is associated with subsequent disability in multiple sclerosis.

Although an increasing amount of research has evaluated interactions between MS and comorbid chronic disease, few data exist regarding the interactions between MS and acute illness. As compared to age and sex-matched persons without MS, persons with MS experience higher rates of hospitalization and critical illness, and higher mortality rates and health care utilization following critical illness. We aimed to determine whether acute illness requiring hospitalization is associated with progression of multiple sclerosis (MS).
METHODS:

We conducted this population-based, retrospective cohort study by linking data from the regional MS Clinic in Calgary, Canada with the Canadian Discharge Abstract Database to identify non-obstetric hospitalizations. We included individuals with a confirmed diagnosis of MS, at least one recorded Expanded Disability Status Scale (EDSS) measurement, and known age of symptom onset of age 10 years or older. Using data from 2009 to 2014, we used generalized linear models with generalized estimating equations to establish the association within individuals between hospitalization and the time course of MS-related disability (as measured by the EDSS), adjusting for sex, age, disease course at onset, and use of disease-modifying therapies.
RESULTS:

We included 2104 individuals with MS in the analysis, who had a median of 4 EDSS measurements each. Of these 491 (23.3%) had at least one hospitalization. Most subjects were female, with a relapsing disease course at onset, and a mean (SD) age at symptom onset of 33.0 (10.0) years. The underlying rate of disability progression averaged 0.9 EDSS points per decade. Following hospitalization, there was a step increase in EDSS, averaging 0.23 points, equivalent to 2.5 years of time-related disease progression. Hospitalization did not alter the subsequent temporal rate of disability progression. The findings did not differ in those hospitalized for MS versus other reasons.
CONCLUSIONS:

Acute illness requiring hospitalization is associated with a worsening of MS-related disability. 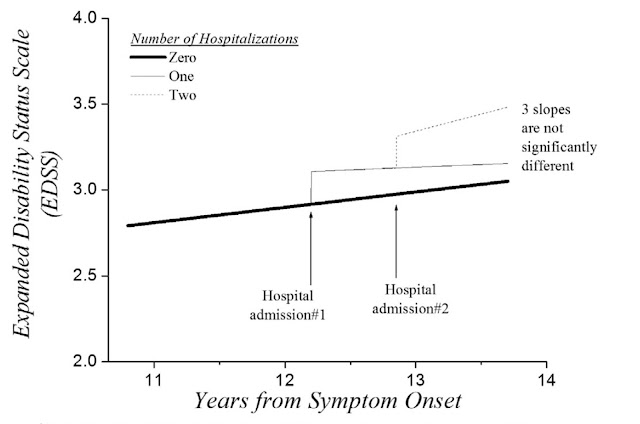 Figure: Average trajectory of EDSS according to number of  hospitalizations

Headache disorders withstanding, there is strong evidence that hospitalization may worsen the underlying progression of many neurological disorders. This relationship between chronic disease and the acute illness is bidirectional, for example bladder dysfunction in MS results in recurrent UTIs, whilst the UTI admission itself adversely impacts on the underlying MS. The factors implicated in this worsening are very much disease specific, for example, in Parkinson’s, this may be secondary to not receiving the meds as prescribed or not at all, or the result of the prolonged bed rest.

Here, Garland et al. studied 6 years worth of hospital records, 2104 PwMS of whom 1/5 had at least one hospitalization. The average length of stay was 3 days, with 80% being hospitalized for less than 10 days. Within this sample they studied the EDSS trajectories over the whole study period; calculating the pre-hospital to post-hospital EDSS change, as well as the rate of change. The question here is not only whether the results are statistically significant, but also whether they were clinically relevant. EDSS is a clinical measure of disability levels in MS.

What they found was that hospitalization did indeed alter disability/disease progression. On average EDSS scores increased by 0.23 points, which in real life terms equates to 2.5 years worth of disability/disease progression. However, aside from the step increase in EDSS, hospitalization did not change the subsequent rate of disability progression – an important point. On the whole, women also tended to fare better, as did those with a relapsing course (i.e. not progressive), and an earlier age at disease onset. The step change in EDSS was also worse for emergency admissions versus planned admissions (0.26 vs 0.16), and those who required intensive care admission versus not (0.65 vs 0.21), when the main reason for admission was not MS (e.g. heart attack) versus MS (0.32 vs 0.22), and a longer versus shorter length of stay (0.35 vs 0.20); though these differences were not demonstrated to be statistically significant, the effects are plausible and may be clinically relevant. And finally, the effect of a second hospitalization was similar to the first, but did not change the EDSS trajectory further (see figure above).

So granted, we may have to accept hospitalization adversely impacts on MS, but what is the modifiable factor in all of this? This is particularly important, especially if your intention is to design targeted interventions. I guess what I’m trying to say is that this is a low-hanging fruit and we need to pick it right away. As an added thought, clinical trials also need to start reporting hospitalizations, since this may confound their findings.