To explore any correlation between the number of previous gadolinium-based contrast material administrations and high signal intensity (SI) in the dentate nucleus and globus pallidus on unenhanced T1-weighted magnetic resonance (MR) images.

High SI in the dentate nucleus and globus pallidus on unenhanced T1-weighted images may be a consequence of the number of previous gadolinium-based contrast material administrations.

Lack of T1 hyperintensity in the dentate nucleus after 15 administrations of a macrocyclic contrast agent in multiple sclerosis. 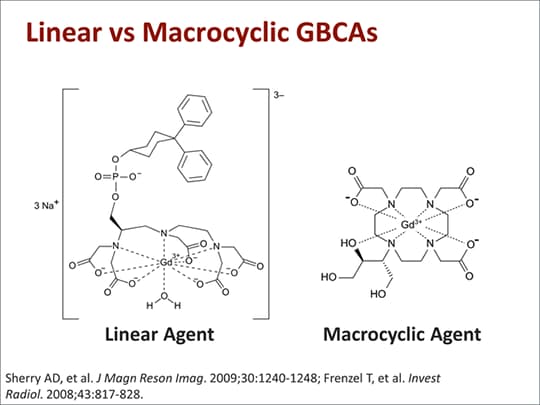 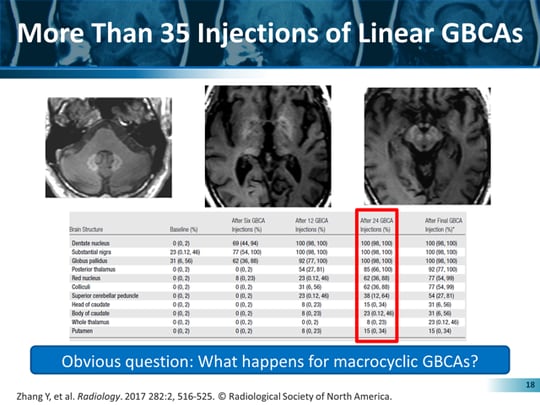 Figure: Increased signal intensity particularly in the dentate nucleus (picture to the left) is observed with linear gadolinium-based contrast agents.

For all the advantage an MRI scan provides in terms of diagnosis and disease monitoring, it is also probably the safest and most non-invasive investigation we have available to us in the 21st century. But, like all developments, what is considered superior at the time will at some point be considered inferior. Since its discovery 40 years ago, the first major problem with MRIs becomes apparent, striking at its main functionality, which is its ease of repetition. It is yet not known what the long-term effects of the high signal intensity seen in the brain (specifically the dentate nucleus and the globus pallidus) of those repeatedly receiving gadolinium, but it cannot be ignored.

It has emerged that linear gadolinium-based contrast agents (GBCAs) may be to blame (see figure above), even in the absence of kidney impairment (most things are got rid of from the body by the kidneys). Based on these findings, on the 10th March 2017m the EMAs Parmacovigilance and Risk Assessment Committee (PRAC) recommended suspension of the marketing authorisations for four gadolinium contrast agents. There is insufficient evidence to suggest whether exposure to macrocyclic GBCAs leads to deposition of gadolinium in the brain. The letter to JNNP (see above for the reference) suggests that this may be a safe alternative. They sampled 22 PwMS who had had 15-26 (average 17) contrast scans with a follow-up period of 3-7 years (average 4.5 years), and found no increase in signal intensity in the MRI examinations using the macrocylic contrast agents gadoterate meglumine and gadobutrol.


I’m not certain, that this sufficiently placates my concern over gadolinium use. Overall, this new development is likely to impact significantly on clinical decision making. One recommendation, maybe, is to use surveillance MRIs less frequently (this will impact on clinicians practicing ‘no evidence of disease activity’), or to rely more on non-contrast scans. Another, maybe, to use alternative modes of monitoring, such as clinical or blood/CSF biomarkers.