Xenopus is the African clawed toad, that many of you may have seen at school.   This study makes tadpoles with oligodendrocytes that glow in the dark and have been engineered so that they kill them in response to a drug. The default then is repair and remyelination.  So its abit like the chemical-induced demyelination in mice.

In this study they test to see if drugs will make the myelin appear quicker.

In this study they report that that siponimod is one of the best agents to promote myelin. Is this good and bad news?

The good news therefore is that here you have an agent that can block the immune response by modulating Sphingosine-1 phosphate one IS1P1) receptor and block relapsing EAE but as shown here it can promote remyelination, via an action on Sphingosine-1-phosphate five (S1P5) receptor. Siponimod has been shown to inhibit secondary progressive MS in phase II, so it could be round the corner from use.
But the bad news is it does not appear to make miraculous recoveries, and so if this is remyelinating it warns that we have to be realistic of what remyelination therapies may offer. Furthermore remyelinating a nerve that will remyelinate any way may not be the same as trying to remyelinate chronic gliotic lesions.
Next question what is the difference between siponimod and fingolimod? Fingolimod targets S1P1 and S1P5 and also S1P3, and S1P4. there are many inferences that fingolimod was also remyelinatory, but there was contradictory evidence, but remember this agent failed in progressive MS. Was this because they didn’t measure hand function?


You asked which compounds were screened 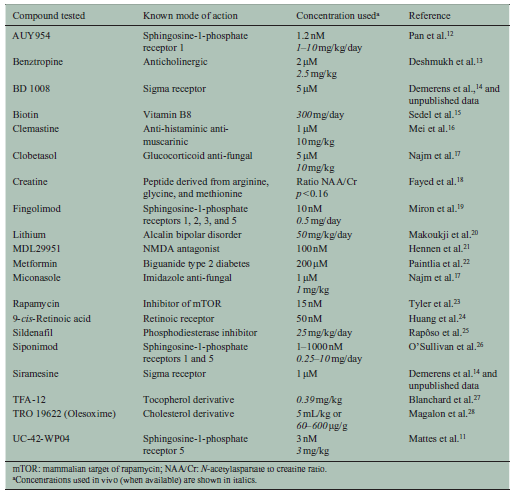