Therapeutic options to treat multiple sclerosis (MS) relapses comprise glucocorticosteroids (GCS) as first-line and therapeutic plasma exchange (TPE) as second-line treatments in GCS-unresponsive patients. No guidelines exist for the treatment of another relapse following TPE. We retrospectively analyzed the responsiveness to GCS in a subsequent relapse following TPE in previously GCS-unresponsive MS patients. Thirty-seven patients with GCS-unresponsive MS relapses received TPE (relapse A). All patients developed another relapse after the completion of TPE and received GCS again (relapse B). The primary study endpoint was the clinical response to GCS and TPE. Marked improvement was defined as clinically significant improvement in function, moderate improvement as a definite change of symptoms without significant impact on function, no effect comprised unchanged symptoms, and deterioration a worsening of symptoms or new deficits. The secondary endpoint was an improvement in expanded disability status scale (EDSS) scoring. All patients were GCS-unresponsive during relapse A and received TPE. During GCS treatment of relapse B, marked improvement was observed in 10, moderate improvement in 24, and no effect in three patients. The EDSS decreased in 15 patients. GCS might remain the first-line relapse treatment following TPE in formerly GCS-unresponsive MS patients.

Like you reading my post today, I too suffer from a little known, but commonplace condition called epistemophilia – meaning to have an insatiable thirst for knowledge. Google, Facebook, Twitter all present facts piecemeal as conclusive statements, but in academia, broadly speaking, the truth of knowledge is based on the strength of evidence.

Many of you know that steroids are used for the treatment of acute relapses, but how many of you knew that there were additional treatment options? Is there a plan B if you do not respond to steroids after a relapse? The answer is a ‘yes’. Steroids remain the panacea for a variety of neurological conditions, but at the same time, particularly in inflammatory conditions, doctors have investigated other avenues; including intravenous immunoglobulins and plasma exchange. The latter, is the process of removal of the substrate of the blood, cleansing it of everything floating in it; circulating cytokines, antibodies, complement and immune complexes. Plasma exchange is a second-line option for those who don’t respond to steroids. The optimal time period in which to see the peak effect of steroids is 7-10 days after a course, and deemed sub-optimal after 2 weeks.

In summary, there is improved steroid responsiveness to the second relapse compared to the first, an interesting statistical difference from a clinical study. This is in part secondary to the use of plasma exchange in the initial relapse (see second set of bars in figure below).

Mechanistically, steroids induce T cell apoptosis, whereas plasma exchange removes factors that are the paraphernalia of immune response (antibodies, cytokines, immune complexes etc.). This resetting may explain some of the regain in response to steroids at the second relapse. Unfortunately, the investigators didn’t measure any biomarkers, so we don’t know what changes were taking place at a biological level, which is disappointing. However, it’s a study to be done for the future. 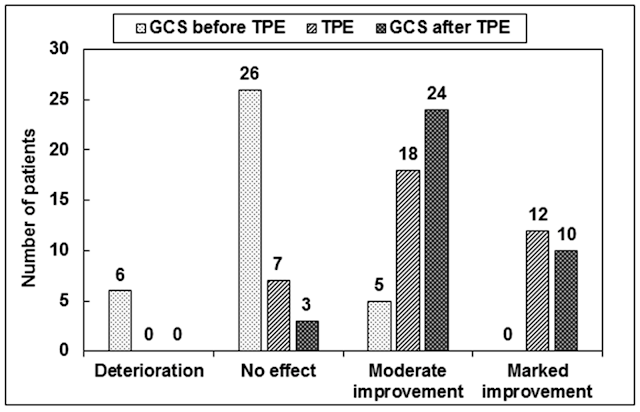 Figure: Different response to glucocorticosteroid (GCS) treatment before and
after therapeutic plasma exchange (TPE) in 37 clinically isolated
syndrome (CIS) and multiple sclerosis (MS) patients. Deterioration was
defined as worsened target neurologic deficit or new neurologic
symptoms, marked improvement as clinically significant improvement in
function, moderate improvement as a definite change of the neurologic
deficit without significant impact on function within the functional
score, and no effect as unchanged symptoms.