In multiple sclerosis, coagulation factors have been shown to modulate inflammation. In this translational study, we investigated whether long-term anticoagulation with warfarin or rivaroxaban has beneficial effects on the course of autoimmune experimental encephalomyelitis (EAE).

Female SJL/J mice treated with anticoagulants namely warfarin or rivaroxaban were immunized with PLP139-151. Stable anticoagulation was maintained throughout the entire experiment. Mice without anticoagulation treated with the vehicle only were used as controls. The neurological deficit was recorded during the course of EAE, and histopathological analyses of inflammatory lesions were performed.

In preventive settings, both treatment with warfarin and rivaroxaban reduced the maximum EAE score as compared to the control group and led to a reduction of inflammatory lesions in the spinal cord. In contrast, therapeutic treatment with warfarin had no beneficial effects on the clinical course of EAE. Signs of intraparenchymal hemorrhage at the site of the inflammatory lesions were not observed. 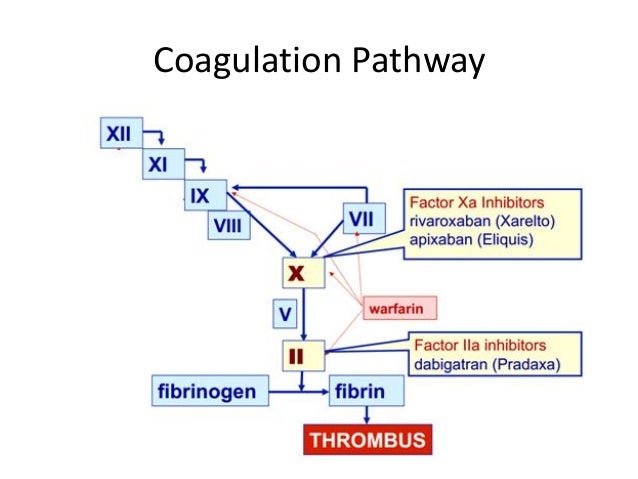 There is a saying that “it is difficult to think outside the box because the thinking is the box”. This certainly applies to science, particularly translational research. Having said this, my interest is not in collapsing the box, but more in widening the dimensions of this hypothetical box. This is one of the main reasons why my posts are not necessarily from the high impact journals.


The focus of this paper is on the coagulation/blood clotting cascade. Thrombin and fibrin are the penultimate end points of the coagulation cascade. They have been shown to modulate inflammation in MS, particularly the activation of microglia (members of the innate immune system that release molecules such as nitric oxide, which can cause CNS tissue injury). Recently, inhibition of factor XII (see figure above) in the coagulation cascade has been shown to reduce the immune activation in the mouse model of MS – EAE.


Here, Stolz et al. investigate whether interrupting the coagulation cascade at other points with either warfarin and rivaroxaban (which are readily in existence as oral anticoagulants) can also ameliorate inflammation in EAE. It is important to understand that the positive findings from this study are targeting the initiation of the disease and not the subsequent events after disease onset (i.e. the preventative model). The authors, therefore, commenced anticoagulant treatment was started on day 1 before the initiation of the disease in these mice. They were randomly assigned them to either warfarin or rivaroxaban, or no anticoagulation.


They found that the severity of the disease was reduced by both warfarin (see figure below) and rivoraxaban. In contrast, despite effective anticoagulation, starting after the initiation of the disease had no effect on the course of the EAE (i.e. no effect when used as a therapeutic regimen rather than a preventative one). One explanation is that the effect of anticoagulation is small, which is only apparent in the preventative setting but is diluted in the therapeutic setting. Another explanation is that the mechanisms of the disease after onset are very much different to those at the start, which is also likely to be true. A key feature of the MS disease onset is the loss of blood brain barrier (BBB) integrity, which allows the influx of immune cells into the brain. Thrombin is known to interrupt BBB integrity, and the protective effect of anticoagulation may be explained by the low thrombin activity preserving the BBB integrity.

It is important to point out that 5 of the mice in the warfarin group died because of bleeding complications, which is a known risk of long-term anticoagulation.


So what is the translational potential of this work? This is work in mice, similar mechanisms may not be in effect in people. It is also a question of the risks vs benefits, which knowing the bleeding potential of oral anticoagulants is a considerable problem to factor in. As a segway it may be worthwhile looking to epidemiology to show the way – whether those on long-term anticoagulation from a young age are less likely to develop MS in the long-run??!

Figure: Preventive anticoagulation with warfarin ameliorates neurological deficits of EAE. Mice were immunized on d0 with PLP139–151 and 20 were treated with warfarin, starting on d1. The clinical scores of the mice were measured daily (a). Maximum scores were found decreased in warfarin-treated mice as compared to the control group (b). There was no difference in loss of weight at the end of the experiment between the groups (c)