Exhaled Breath Markers for Non-Imaging and Non-Invasive Measures for Detection of Multiple Sclerosis.


Multiple sclerosis (MS) is the most common chronic neurological disease affecting young adults. MS diagnosis is based on clinical characteristics and confirmed by examination of the cerebrospinal fluids or by magnetic resonance imaging of the brain and/or spinal cord. However, neither of the current diagnostic procedures are adequate as a routine tool to determine disease progression. Thus, diagnostic biomarkers are needed. In the current study, a novel approach that could meet these expectations is presented. The approach is based on non-invasive analysis of volatile organic compounds (VOCs) in breath. Exhaled breath was collected from 204 volunteers, 164 MS and 58 control individuals. Analysis was performed by: gas-chromatography mass-spectrometry (GC-MS) and nanomaterial-based sensors array. Predictive models were derived from the sensors, using Artificial Neural Networks. GC-MS analysis revealed significant differences in VOCs abundance between MS patients and Controls. Sensor data analysis on training sets were able to binary discriminate between MS patients and Controls with accuracies up-to 90%. Blinded sets showed 95% positive predictive value between MS-remission and control and 100% sensitivity with 100% negative predictive value between MS not-treated (NT) and control, and 86% NPV between relapse and control. Possible links between VOC biomarkers and the MS pathogenesis were established. Preliminary results suggest the applicability of a new nanotechnology-based method for MS diagnostics. 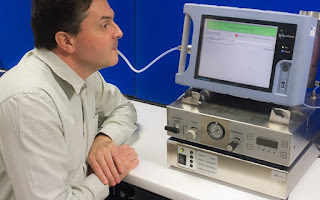 Humanitarian, Helen Keller; made blind and deaf following scarlet fever as a child, once wrote that “smell is a potent wizard that transports you across thousands of miles and all the years you have lived“. Recently this year, odor has been highly publicized in Parkinson’s disease, ranging from dogs that could sniff it out, to even a woman who could smell it!!! But, is this all hocus pocus or is there some science behind these assertions?


Broza et al. claim that MS has a distinct odor. They introduce the concept of volatile organic compounds (VOCs) that are released by cells and breakdown products of cells in to body fluids, which ultimately appear in the breath. They use a sophisticated technique called mass spectrometry, which can separate a complex mixture of chemicals, in order to detect these compounds.


They studied 146 PwMS and 58 controls; of which 128 of PwMS were in remission, whilst 18 had experienced a relapse. Confounders, such as smoking, geographic location etc. were also controlled for.


They found that VOCs (acetophenone, heptadecane, nonanal, decanal) that best differentiated MS from controls had been previously noted to play a role in MS disease processes; in particular majority of them were the result of secondary oxidation of triglycerides (a process called lipid peroxidation). Peroxidation of lipids, such as linoleic acid and linolenic acid which are cell membrane components, induces formation of volatile organic compounds that are released in the breath.


In addition, there was also higher levels of sulfur dioxide (SO2) in MS. SO2 is mainly found in air after volcanic eruptions and man made after fossil fuel combustion! SO2 is controversial and has been hypothesized to be a neurological disease agent by increasing oxidative stress. In animal models SO2 inhalation has been shown to release proinflammatory cytokines, such as tumour necrosis factor alpha (TNF-alpha) and interleukin-1b (Il-1b) amongst other effects.


The group did not detect any differences between the relapse and remission phases of MS.


In summary, there appears to be a ‘breath-print’ for MS, which has a potential for increasing our knowledge of the disease processes in MS. Broza et al. argue that the positive predictive value of the test is sufficient to have diagnostic usefulness in MS vs MRI and oligoclonal bands. I’m not entirely in agreement, this is a cohort study and more work needs to be done before it can be demonstrated to have any value at an individual level.