Trial of Minocycline in a Clinically Isolated Syndrome of Multiple Sclerosis

On the basis of encouraging preliminary results, we conducted a randomized, controlled trial to determine whether minocycline reduces the risk of conversion from a first demyelinating event (also known as a clinically isolated syndrome) to multiple sclerosis.

During the period from January 2009 through July 2013, we randomly assigned participants who had had their first demyelinating symptoms within the previous 180 days to receive either 100 mg of minocycline, administered orally twice daily, or placebo. Administration of minocycline or placebo was continued until a diagnosis of multiple sclerosis was established or until 24 months after randomization, whichever came first. The primary outcome was conversion to multiple sclerosis (diagnosed on the basis of the 2005 McDonald criteria) within 6 months after randomization. Secondary outcomes included conversion to multiple sclerosis within 24 months after randomization and changes on magnetic resonance imaging (MRI) at 6 months and 24 months (change in lesion volume on T2-weighted MRI, cumulative number of new lesions enhanced on T1-weighted MRI [“enhancing lesions”], and cumulative combined number of unique lesions [new enhancing lesions on T1-weighted MRI plus new and newly enlarged lesions on T2-weighted MRI]).

A total of 142 eligible participants underwent randomization at 12 Canadian multiple sclerosis clinics; 72 participants were assigned to the minocycline group and 70 to the placebo group. The mean age of the participants was 35.8 years, and 68.3% were women. The unadjusted risk of conversion to multiple sclerosis within 6 months after randomization was 61.0% in the placebo group and 33.4% in the minocycline group, a difference of 27.6 percentage points (95% confidence interval [CI], 11.4 to 43.9; P=0.001). After adjustment for the number of enhancing lesions at baseline, the difference in the risk of conversion to multiple sclerosis within 6 months after randomization was 18.5 percentage points (95% CI, 3.7 to 33.3; P=0.01); the unadjusted risk difference was not significant at the 24-month secondary outcome time point (P=0.06). All secondary MRI outcomes favored minocycline over placebo at 6 months but not at 24 months. Trial withdrawals and adverse events of rash, dizziness, and dental discoloration were more frequent among participants who received minocycline than among those who received placebo.

The risk of conversion from a clinically isolated syndrome to multiple sclerosis was significantly lower with minocycline than with placebo over 6 months but not over 24 months. (Funded by the Multiple Sclerosis Society of Canada; ClinicalTrials.gov number, NCT00666887.)

It is important to pay attention.


To what specifically you might ask? Why, to everything…


Neurologists are notorious for paying attention to detail, some may consider this peculiar – even borderline autistic. So, in this fashion and not simply for diegetic entertainment, I’m able to say that the Yong group have trialed minocycline as a neuroprotectant in just about every neurological disorder they can get their hands on. In science this is tantamount to using the same run of numbers in the national lottery to improve the odds. But they’ve seem to have hit the jackpot with this one – the disorder being, multiple sclerosis.


Minocycline is a semi-synthetic tetracycline (antibiotic, commonly used for acne treatment), but also has additional biological actions, including anti-inflammatory properties and anti-apoptotic effects (process by which cell death occurs in the body). In short, potentially a good neuroprotectant.


Metz et al. gave 100mg twice a day of minocycline to 72 subjects and placebo (dummy treatment) to 70 subjects. There was some imbalance between the two groups at the start of the trial, in that the placebo group were more likely to have their first symptom in the spinal cord (increased likelihood of being disabling) and have more than one enhancing lesion on their baseline MRI head scan (i.e. more active). At the end of the study, 23 in the minocycline group and 41 in the placebo group reached the primary outcome of conversion to multiple sclerosis from clinically isolated syndrome (i.e. a single demyelinating event only) – see figure below. The adjusted risk difference of 18.5 % at 6 months is similar to that with other disease-modifying therapies for multiple sclerosis (24% for IFNb-1b, 26% IFNb-1a, 18% teriflunomide, 25% cladrabine). MRI scans were not available in ~37% of participants after month 3 in the placebo group which may have introduced bias in the MRI analysis which favoured minocycline in terms of change in T2 lesion load and mean GAD enhancing lesions. 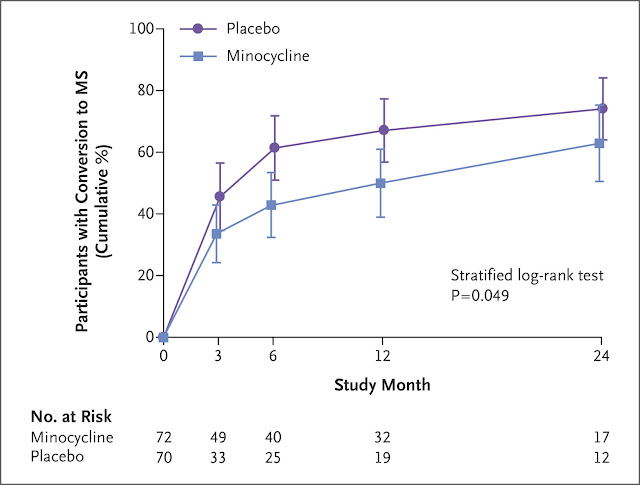 Figure Participants Who Reached the Outcome of Conversion to Multiple Sclerosis (MS) over the Course of 24 Months.


There were more adverse events in the minocycline group (86% vs 61% in placebo) and included rash, teeth discolouration and dizziness.


Overall, despite the underpowered study, the minocycline trial is a success for MS. Here is a toast to the Yong group for their tenacity and gumption, and to all neurologists and scientists out there who keep going! I would say watch this space as the minocycline saga unwinds.