Summary: this post highlights the problem of cog-fog in pwMS and describes the science behind the symptom. It also presents the results of a study looking at the effects of natalizumab on cog-fog. The post concludes with an appeal to the community for help in developing a cog-fog-o-meter.

Every now and again a post on this blog catches the imagination of the readers and gives me insights into MS that I haven’t appreciated before. Yesterday’s post on the impact of MS on day-to-day functioning, albeit golf, that occurs at a level too subtle to be detected using our crude assessment tools was a revelation. It is clear this patient had ongoing inflammation, associated with a drop off in physical and cognitive functioning. I recall him complaining to me that he didn’t feel right on fingolimod, in particular, he had cog-fog. 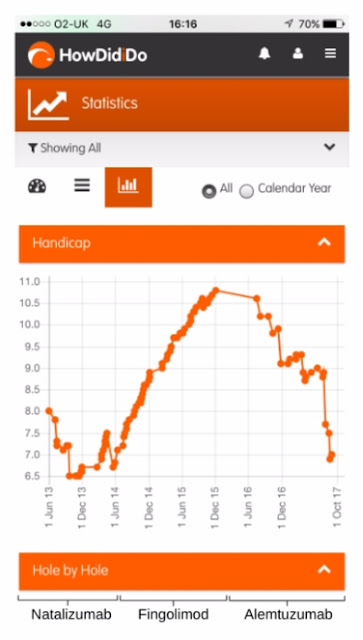 One of the first things I noticed when I started using natalizumab is that patients would come back after 3-4 months feeling better. They would often describe their ‘brain fog’ – now better known as ‘cog-fog’ – lifting, their ‘fatigue evaporating’, ‘having energy’, noting improvements in both ‘mood and anxiety’ and saying ‘I feel normal again’.

Please note this patient felt well on natalizumab and this is not unique to this patient. I often refer to natalizumab as being transformational and use it describe three eras in the management and study of MS:
The TYNERGY study below supports my anecdotal clinical observations. When patients with active MS went onto natalizumab a large number of their negative symptoms improved. I don’t think these observations are limited to natalizumab and are also seen with other highly effective therapies, but take longer for the improvements to be seen with the other high-efficacy DMTs. How do you include these effects in the benefit and risk profile of DMTs? A hard to quantify treatment effect.

The question that needs answering is how does an anti-inflammatory DMT such as natalizumab reduce fatigue? I have hypothesised that it works via suppressing inflammation in the brain that drives fatigue. Inflammation is known to cause sickness behaviour, a programmed behavioural response designed to conserve energy and allow the body to recover.

Sickness behaviour goes far back in the evolutionary tree so it must have given our evolutionary ancestors a survival advantage. Two mediators of inflammation, one called interleukin-1 (IL-1) and the other tumour necrosis factor alpha (TNF-alpha), are known triggers of this behavioural response. IL-1 and TNF-alpha cause fatigue, sleepiness (hypersomnolence), reduced appetite (anorexia), a raised body temperature (fever) and low mood (depression) that forces one to lie down, sleep and allow our sick bodies to recover. We all have experienced sickness behaviour before these are the typical symptoms we get when we have a systemic infection similar to how you feel when you have influenza. We know that in MS both IL-1 and TNF-alpha levels are increased in the brains of pwMS. Therefore, I am convinced as DMTs switch off inflammation in the brain and IL-1 and TNF-alpha levels drop fatigue improves as sickness behaviour disappears.

The following is an old slide presentation of mine on fatigue that includes a section on sickness behaviour. Some of the points covered in this slide presentation are quite technical; if they need more explanation please ask and I will do additional posts on this.

Now I need your help. I am giving several presentations at ECTRIMS this year, however, two of the talks are somehow related. The first is a hot topic talk on self-monitoring using web-based apps and the second is a TED-type talk in a satellite symposium on the need for routine cognitive testing in clinical practice. In these talks, I will be making the case for self-monitoring across multiple domains including cognition. However, I am not aware of any outcome measure that specifically captures sickness behaviour or cog-fog in pwMS. Do you think we can measure cog-fog? If yes, how?

What I am looking for is a simple self-monitoring tool for cog-fog.

OBJECTIVE: To evaluate whether fatigue improvement might be directly linked to improved depression and day-time sleepiness.

METHODS: MSers were assessed regarding fatigue, depression, and day-time sleepiness. The relation between changes of the two latter symptoms and changes in fatigue was analyzed.

RESULTS: After 1 year of natalizumab treatment, the majority of MSers (>92%) remained stable or improved in total, motor, and cognitive fatigue. Proportion of MSers without depression increased by 17% while proportions of mildly depressed MSers or MSers with potential major depression decreased by 5 and 12%, respectively. Proportion of MSers classified as not being sleepy increased by 13% while proportions of sleepy and very sleepy MSers decreased by 11 and 2%, respectively. Most importantly, improved depression and sleepiness were significantly related to improved fatigue.

CONCLUSION: Our findings highlight the importance of patient-reported outcomes in identifying potential benefits of drug treatment beyond its well-established effects on disease activity and disability progression.