Do you know what a maven is? Is cladribine a maven? #ClinicSpeak #ResearchSpeak

Summary: This post describes why cladribine is a semi-selective immune reconstitution therapy or SIRT and some of the attributes that make cladribine such a good drug to treat MS.

I spoke at a meeting yesterday about my journey with oral cladribine. It began in 2002 with an advisory board to decide if Serono should in-license the oral formulation as a potential treatment for MS and we have finally got to the point of the drug becoming available in Europe a week ago. A journey that has taken 15 years. Who said drug development happens quickly? Another milestone in the history of oral cladribine was the publication of the CLARITY extension study; it came out as an e-publication yesterday.

At yesterday’s meeting, the chair introduced me as a maven; a compliment considering oral cladribine tablets have been named Mavenclad. Maven refers to an expert and is derived from the Yiddish word meyvn, meaning “one who understands”. As you can see the usage of the word has soared in the last decade or so. I assume this is because Maven has been popularised by Malcolm Gladwell in his book ‘The Tipping Point: How Little Things Can Make a Big Difference‘, which was published in 2000. Gladwell’s use of the word is a little bit broader than that of an expert. 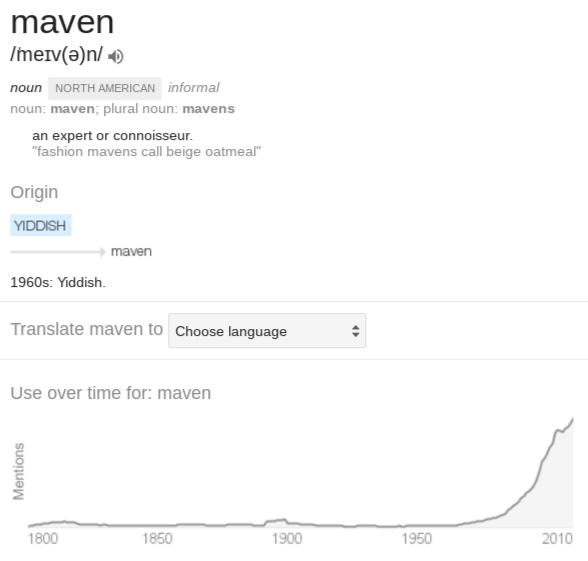 Wikipedia Excerpt: Gladwell describes mavens as “information specialists”, or “people we rely upon to connect us with new information”. Mavens accumulate knowledge, especially about the marketplace, and know how to share it with others. Gladwell cites Mark Alpert as a prototypical Maven who is “almost pathologically helpful”, further adding, “he can’t help himself”. In this vein, Alpert himself concedes, “A Maven is someone who wants to solve other people’s problems, generally by solving his own”. According to Gladwell, Mavens start “word-of-mouth epidemics” due to their knowledge, social skills, and ability to communicate. As Gladwell states: “Mavens are really information brokers, sharing and trading what they know”.

Enough small talk. I have been heavily criticised by MD about the length of time it took us to get the CLARITY Extension study published. Three submissions later and six rounds of addressing reviewer’s comments it is finally out. This study not only confirms cladribine as an IRT (immune reconstitution therapy) but a SIRT (semi-selective IRT).  Just 8-10 days of treatment in year-1 and a repeat cycle year-2 is sufficient to put the majority of subjects into long-term remission for up to 4 years and beyond. What proportion will need retreatment in the future is not known at present, but I suspect it will be in the same ballpark as alemtuzumab.

There is little doubt that oral cladribine is going to disrupt the MS DMT space. The fact that it is an IRT will make it more cost-effective than the maintenance treatments. Other advantages are that it is oral, easy to use, it is not associated with a cell lysis syndrome or infusion reactions, it does not take out the innate immune system so Listeria is not a problem and the monitoring requirements are minimal. There is no secondary autoimmune signal. The fact that it is a small molecule means there are no anti-drug antibodies, or NABs. We are also excited about the fact that it penetrates the CNS and may have activity on the B-cell and plasma cell biology within the brain and spinal cord.  More importantly, it selectively targets the adaptive immune system in particular B-cells.

In summary, cladribine is as close to the most ideal DMT we have. Is there a down side? Yes, in an attempt to make it safe I  think we have compromised on the dose. If only we can selectively target cladribine to B-cells and the leave the T-cell compartment intact we will have a real winner, an oral form of anti-CD19. Please note anti-CD19 and not anti-CD20. CD19 is expressed on a wider population of cells including plasmablasts and some plasma cells. The downside of anti-CD20 is that it does not touch plasma cells. I have previously hypothesized on the need to scrub the CNS free of pathogenic plasma cells to prevent ongoing gray matter damage and delayed worsening, or progression of MS.

OBJECTIVE: To assess the safety and efficacy of cladribine treatment in a 2-year Extension study.