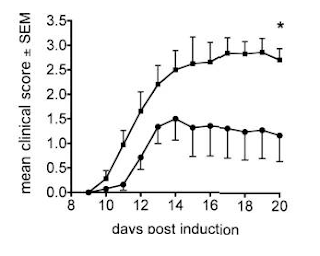 This study reports that dietary salt does not link to MS. Our advice has always been to watch your salt intake as we know too much can be bad for health. You can read the commentary too….I took the title from that
spawns loads of papers to show that the salt idea is probably made from pillars of sand ready to crumble. It happens over and over again and is part of science and we often buy the story.
We were talking to some people from North America the other week and they said that they could not repeat the original animal work. It made me wonder how many other labs have tried to repeat it and found that it didn’t work. There is a published…kind of….repeat, where they made the induction adjuvant not work very well and got the same result in one sex..but not the other.

I just looked at the data (above) and could see it was a rather dubious experiment as the control group lacked any quality control, as usually they would be a score around 3, not 1 = a limp tail. If they had said that they made the response sub-optimal, (which they didn’t say), I would have bought into it.  If I had been the referee I would have asked them to repeat the work, where the control group gets a decent score.

So if you are bothered to read EAE papers out look for this.

For example when the treatment transgene makes the EAE worse the control group is at score 1 and the test is at 3, when the treatment/transgene makes the EAE better the control group is at 3 and the test is a 1. This happens loads of times. I think better if there was quality control and the control group got the same score in all experiments. I bet then there would be no effect of the treatment/transgene…yes I am a cynic. So maybe the experiment would not work in another mouse let alone a human. I have seen this over and over again…one person got quite upset when I pointed this out on the blog about their “Cell {journal} paper.

However, I will be happy to be proved wrong that salt is the bees knees, but I am not going to waste any time or resource going there to do animal work. Back in the the day I did this. Once I learnt that eight other labs had found the original “Nature” experiment did not work, no-one published this. One group apparently did repeat it and did publish. Has the concept stood the test of time?….Em No.

However, the salty story isn’t yet closed, as there will be more papers on this subject. In fact we have to wait until we see the results of the clinical trial NCT02282878. The effect of dietary salt intake on immune function in patients with multiple sclerosis, which should have finished. It aims to show that salt impacts on TH17….but the next, real question is what is the role of TH17 in MS?….is this the bigger pinch of salt that we have all bought into?

Really, what is the evidence that TH17, which are CD4 T cells, are critical to MS?
The trial of anti-IL17 was never properly published and the approach has never gone anywhere.

Does ocrelizumab deplete TH17? Maybe this is how it works:-).