Lehmann-Horn K, Kinzel S, Weber MS. Deciphering the Role of B Cells in Multiple Sclerosis-Towards Specific Targeting of Pathogenic Function.Int J Mol Sci. 2017 Sep 23;18(10). pii: E2048. doi: 10.3390/ijms18102048.
B cells, plasma cells and antibodies may play a key role in the pathogenesis of multiple sclerosis (MS). This notion is supported by various immunological changes observed in MS patients, such as activation and pro-inflammatory differentiation of peripheral blood B cells, the persistence of clonally expanded plasma cells producing immunoglobulins in the cerebrospinal fluid, as well as the composition of inflammatory central nervous system lesions frequently containing co-localizing antibody depositions and activated complement. In recent years, the perception of a respective pathophysiological B cell involvement was vividly promoted by the empirical success of anti-CD20-mediated B cell depletion in clinical trials; based on these findings, the first monoclonal anti-CD20 antibody-ocrelizumab-is currently in the process of being approved for treatment of MS. In this review, we summarize the current knowledge on the role of B cells, plasma cells and antibodies in MS and elucidate how approved and future treatments, first and foremost anti-CD20 antibodies, therapeutically modify these B cell components. We will furthermore describe regulatory functions of B cells in MS and discuss how the evolving knowledge of these therapeutically desirable B cell properties can be harnessed to improve future safety and efficacy of B cell-directed therapy in MS. 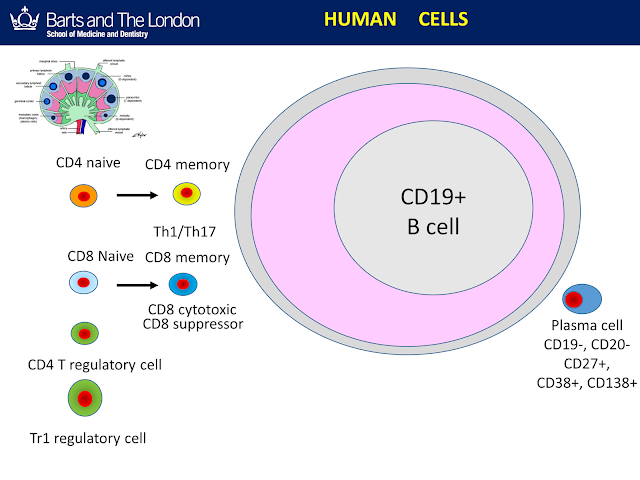 I am doing a presentation and am trying to see where the road blocks are to the understanding of MS.

Reading through this review on B cells, which you can read if you are interested, it gives me the feeling that I am banging my head against a brick wall.
I think there is a failure to appreciate that you cannot simply view B cells as a single population. Because if you do you cannot hope to understand what is going on.

For years we have been viewing T cells as a mixed group of cells, T helper cells (CD4), cytotoxic (CD8) and regulator cells and more, but the biggest road block to understanding MS is viewing B cells as a single cell population, which many studies do.

As a card carrying T cell immunologists, I must admit I do not understand the complexities of the B cell response, but I am trying to learn. So maybe you can learn too.

There are many, many subtypes of B cells and here are a few 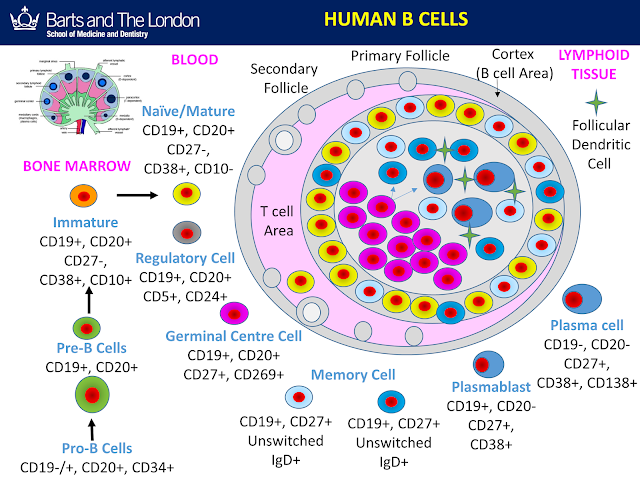 B cells are born in the bone marrow from stem cells and then go through a series changes in their coats and expressing some markers. The graph below is simplified as is much more complex 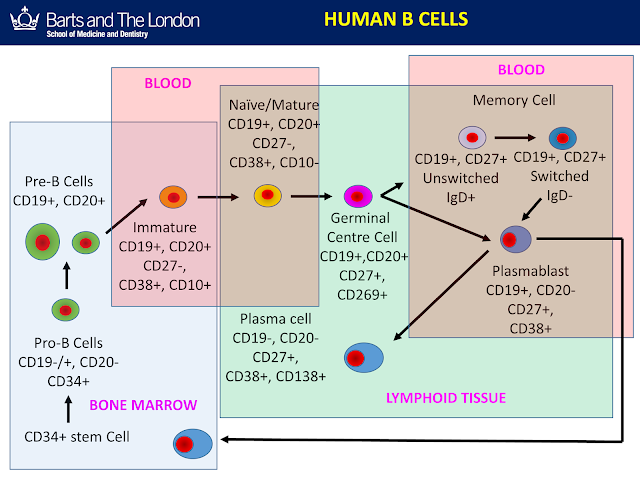 It is clear that pre-B cells form immature B cells in the Bone Marrow, these change into mature B cells, which shuttle between the bone marrow and lymphoid tissue, such as the spleen and lymph nodes.


In some studies they are called follicular cells. Following stimulation, they proliferate in structures called germinal centres.
Germinal centre cells differentiate into either memory B cells or plasmablasts that can turn into antibody forming..plasma cells,….


When B cells are depleted they repopulate in a stereotyped way.


The immature cells enter the blood to fill the space and then there is maturation This masks the very slow repopulation of memory cells, from the lymphoid organs, which is where we have said the action is. All drugs that work in MS deplete memory B cells, except natalizumab which get trapped in the blood so they can’t get into the brain.


Memory B Cells are Major Targets for Effective Immunotherapy in Relapsing Multiple Sclerosis.

Clearly not many people buy it…until they do. They may be clutching at straws 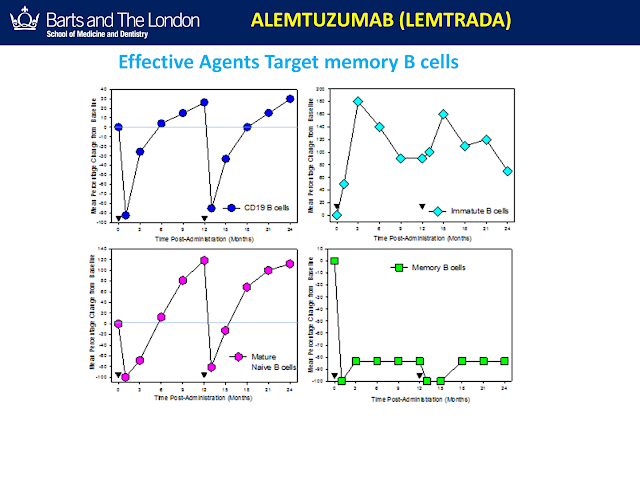 I will explain how this happens,  but I hope you can see that alemtuzumab wipes out memory B cells, but if you look at the CD19 population it is relatively meaningless in terms of understanding what is going on. So MS B cells are not a single population