We did a single centre, single-blind, prospective, randomised pilot trial at the University of Florida Center for Movement Disorders and Neurorestoration clinic (Gainesville, FL, USA). We recruited adult patients with a clinical diagnosis of multiple sclerosis tremor refractory to previous medical therapy. Before surgery to implant both leads, we randomly assigned patients (1:1) to receive 3 months of optimised single-lead DBS-either VIM or VO. We did the randomisation with a computer-generated sequence, using three blocks of four patients, and independent members of the Center did the assignment. Patients and all clinicians other than the DBS programming nurse were masked to the choice of lead. Patients underwent surgery 1 month after their baseline visit for implantation of the dual lead DBS system. A pulse generator and two extension cables were implanted in a second surgery 3-4 weeks later. Patients then received an initial 3-month period of continuous stimulation of either the VIM or VO lead followed by blinded safety assessment of their tremor with the Tolosa-Fahn-Marin Tremor Rating Scale (TRS) during optimised VIM or VO lead stimulation at the end of the 3 months. After this visit, both leads were activated in all patients for an additional 3 months, and optimally programmed during serial visits as dictated by a prespecified programming algorithm. At the 6-month follow-up visit, TRS score was measured, and mood and psychological batteries were administered under four stimulation conditions: VIM on, VO on, both on, and both off (the order of testing was chosen by a computer-generated random sequence, assigned by independent members of the centre, and enacted by an unmasked DBS programming nurse). Each of four stimulation settings were tested over 4 consecutive days, with stimulation settings held constant for at least 12 h before testing. The primary outcome was change in mean total TRS score at the 6-month postoperative assessment with both leads activated, compared with the preoperative baseline mean TRS score. Analysis was by intention to treat. Safety was analysed in all patients who received the surgical implantation except in one patient who discontinued before the safety assessment. This trial is registered with ClinicalTrials.gov, number NCT00954421.

Between Jan 16, 2007, and Dec 17, 2013, we enrolled 12 patients who were randomly assigned either to 3 initial months of VIM-only or VO-only stimulation. One patient from the VO-only group developed an infection necessitating DBS explantation, and was excluded from the assessment of the primary outcome. Compared with the mean baseline TRS score of 57·0 (SD 10·2), the mean score at 6 months decreased to 40·1 (17·6), -29·6% reduction; t=-0·28, p=0·03. Three of 11 patients did not respond to surgical intervention. One patient died suddenly 2 years after surgery, but this was judged to be unrelated to DBS implantation. Serious adverse events included a superficial wound infection in one patient that resolved with antibiotic therapy, and transient altered mental status and late multiple sclerosis exacerbation in another patient. The most common non-serious adverse events were headache and fatigue. 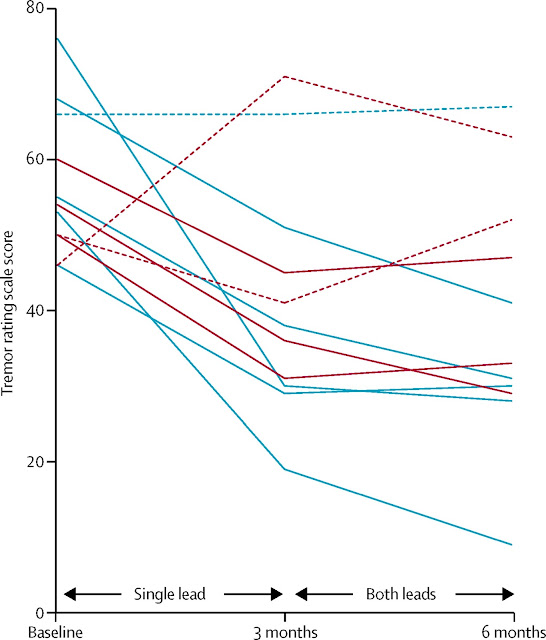 When is good enough, good enough? Would it encompass general technological advances of this decade, or specifically the medical technologies which have been few and far between, or to the human acceptance of this very same technology? It is therefore not surprising that the critiques of this article chose as their title for the editorial piece: “Multiple sclerosis tremor: are technical advances enough?”.


Tremor in MS is quite frequent affecting 25-58% of PwMS, particularly in the later stages of MS – often do not respond to drugs and can be the difference between holding a utensil to feed yourself or have someone do it for you. I have in the past referred selected PwMS for deep brain stimulation, but less so now, as the surgeons have been reluctant to proceed based success of the procedure. This is because, unlike parkinsonian or essential tremor there is often a superimposed ataxic (waving from side to side) component to the tremor, which we think originates from the cerebellum, making it unsuitable for DBS.


DBS is a surgical procedure whereby wafer thin electrodes are inserted into the thalamus of the brain commonly (see figure below), connected to a device under the skin that gives targeted electrical impulses that negates function, and improves tremor control.


The sample size is small – only 12 PwMS enrolled. Three cases were non-responders owing to either disease progression or concomitant ataxia. Also, this study is not large enough, to permit development of a selection criteria by which success at DBS can be per-determined. One PwMS developed early post-operative infection; again as tremors are more frequent in late disease, they are also much frailer. Moreover, the trial duration of six months is short, and does not allow us to project medium- and long-term outcomes. The latter is an important point, as you’re effectively undergoing an elective brain procedure.

Overall, the initial results are promising; but we need to understand more about what is an effective target for tremor treatment in MS and what selection criteria should be utilized. I hope this work attracts more interest and more researchers/companies willing to pursue technological advances for the improvement of MS functionality.