Teriflunomide is the drug of choice for treating MS in patients recovering from PML. #NeuroSpeak #CharcotProject

Summary: This post summarises the scientific principles for treating multiple sclerosis in patients who have PML as a complication of natalizumab treatment. I make the case for using DMTs that are not immunosuppressive and highlight the antiviral effects of Teriflunomide that make it the DMT of choice.

At the grand round at Imperial College on Friday, a case of natalizumab-associated PML was presented. The patient had developed IRIS and was deteriorating. The question was posed about MS rebound contributing to some of the later deterioration in functioning and how to treat MS in this situation.

It is clear that you cannot use an MS DMT that causes immunosuppression, particularly one that targets T-cells, in this situation. Patients with PML need their CD8+ cytotoxic T-cell to recover from PML. In my opinion, this only leaves 4 drugs that have a suitable profile:

(1) Interferon-beta: IFNbeta is not immunosuppressive and has many activities that are anti-viral. However, a lot of people who are on natalizumab may have failed IFNbeta in the past. IFNbeta has also been shown not to be that effective in preventing MS rebound post-natalizumab.

(2) Glatiramer acetate: GA is not immunosuppressive, is only moderately effective in treating MS, is not effective in preventing MS rebound post-natalizumab and has a delayed onset of action. Therefore, it would not be the ideal agent to prevent MS rebound post-alemtuzumab in a patient with PML.

(3) Teriflunomide: Teri is not immunosuppressive as defined by the regulators, it has a complex mode of action that includes general anti-viral activity. Interestingly, leflunomide, a prodrug that is converted into teriflunomide, has been shown to have antiviral effects against BK virus (see below), that is very closely related to JCV, the cause of PML. In addition, there is some emerging evidence that Teri may cross the blood-brain barrier and hence may be able to inhibit JCV with the CNS. At the last AAN there was a poster of a switch study showing that Teri, post-natalizumab, was able to hold back rebound MS disease activity in the majority of patients and overall these patients did well.

(4) Daclizumab: Dac is not immunosuppressive, as defined by regulators, and only drops CD8 cell numbers by ~10%. Therefore, antiviral responses, for example against JCV should be intact. Dac also expands the NK, or natural killer, cell population that have anti-viral effects. We are in the process of doing a switch study to assess the effectiveness of Dac post-natalizumab to see how effective it is in preventing post-natalizumab rebound. Daclizumab also has a rapid-onset of action making which makes it an ideal agent post-natalizumab. However, as Dac reduces IL2 signalling in activated T-cells it may blunt effector T cell responses, i.e. reduce their reactivity, which makes me concerned about using it in patients with active JCV infection and PML.

My recommendation, therefore, to the team looking after this patient particular patient was to use high dose Leflunomide (40mg per day) until JCV was not detectable in her CSF and then to switch her to Teriflunomide 14mg per day. The choice of Leflunomide dose is based on that used to treat BK-virus associated nephropathy. In my opinion, the team looking after this patient have little to lose; her JCV viral load in the spinal fluid was dropping so the IRIS (immune reconstitution syndrome) was at least taking care of the JC virus. However, she needs something to take care of MS without impacting on her immune system and at the same time assisting with the treatment of her PML.

With regard to Teriflunomide, there is an increasing number of reports of how well pwMS are doing on teriflunomide long-term. Teriflunomide is the only DMT that works significantly better second, or third, line than it does as a first-line treatment (see figure below). I have hypothesised that these observations may be due to teriflunomide’s mode of action as an anti-viral agent. Professor Julian Gold and I are in the process of exploring this hypothesis under the umbrella of the Charcot Project. We will let you know as soon as we have data available. 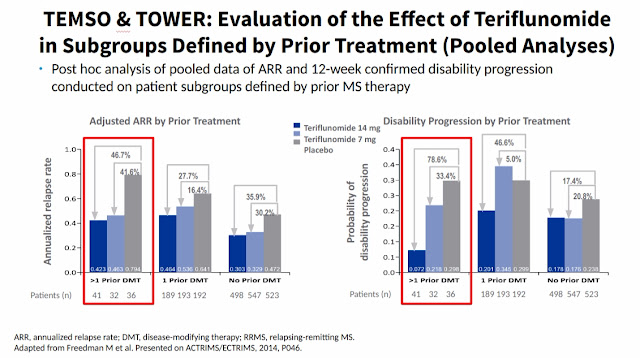 
BACKGROUND: Polyoma BK virus produces an aggressively destructive nephropathy in approximately 3% to 8% of renal allografts, is associated with graft loss within one year in 35% to 67% of those infected and there is no therapy of proven efficacy. Leflunomide is an immune suppressive drug with anti viral activity in vitro and in animals.