Background: Alemtuzumab is a CD52-specific monoclonal antibody that markedly depletes T and B lymphocytes and inhibits relapsing multiple sclerosis (MS). However, polymorphonuclear neutrophils also express CD52 and can be depleted by alemtuzumab, thereby potentially contributing to the infections that develop post-alemtuzumab treatment. Surprisingly, however, the degree of neutrophil depletion in MS was not included in the pivotal trial reports.Methods: The regulatory submission of the Comparison of Alemtuzumab and Rebif® Efficacy in MS 1 and 2 trials was obtained from the European Medicines Agency through Freedom of Information. The data relating to neutrophils was extracted.
Results: Data extraction from the submission was straightforward. In year one 72/811 (8.9%) and in year two 116/808 (14.4%) people with MS (pwMS) developed neutropenia. The degree of neutropenia was generally mild, and only 5/811 (0.6%) in year 1 and 12/808 (1.5%) in year 2 developed grade 3-4 toxicity. Two pwMS developed severe neutropenia-related adverse events.
Conclusions: Treatment with alemtuzumab induces neutropenia, which is mild in the large majority of pwMS treated. Leucocyte levels following alemtuzumab should be monitored as a marker of efficacy and safety; persistent neutropenia may require treatment 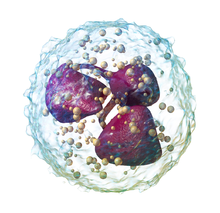 Following on from a recent case report indicating that alemtuzumab, marketed by Sanofi Genzyme, can induce neutropenia (loss of neutrophils, which are your first line of defense against fighting infection), this paper was written and submitted within a few hours.

It is all well an dandy to know that something can occur, but surely it is important to know how common the problem is.

We show that the occurrence of neutrophil loss is frequent but marked loss is not a common problem. This data was in the unpublished phase III trial data set, but as it is now 5 years since the trial report was published and add another few years since the work was done, the manufacturers had shown no interest in publishing the information.

We had it because we had the data set obtained from the European Medicines agency and so we could easily answer the question. Pharma could never write and submit a paper within a few hours.

Will they be miffed, as we have published the information?

he manufacturer has had 7 years to get the data published, as have their academic collaborators, so I should not feel too bad?

Some of our colleagues are not too happy with this type of information source and have told us so in no uncertain order, but this is important, safety information.

I am sure the manufacturers are happy that we have put the case report in context.

But, it says to pharma, that the the world order has changed and now the machinery is at hand to get access to trial data. We have led the way.

So they now pharma can get up to 12-18 months to publish what they want, to publish in a way they want to publish the story, but after that it will be fair game.

The race may be on to get hold of the ocrelizumab data…for example the phase II extension study…oh I forgot I’ve published the headline result already:-).

Anyway back to the alemtuzumab data set.

It houses quite a lot of unpublished ideas and I had hoped that by publishing some details, such as the presence of neutralizing antibodies, it may have encouraged the academics & company to come clean.  It didn’t, so I tell you here again.

Will it be part of the CARE-MS extension data reporting?

It is important as the question is….How many people got anaphylactoid (allergic) responses during infusion?

Importantly how often does the antibody stop working?

These are theoretical problems based on immunological principals
and are a problem for all therapeutic proteins, but is alemtuzumab
extra special?

But I know it doesn’t always, however what is the scale of the issue?

I don’t know, but I can assure you we will get an answer by hook or by crook, with or without company assistance.

Maybe it is not an issue, but let’s see the data!

As MD2 will testify, once the ferret’s jaw locks…it locks..and with no costs and no resource to data crunch we can bide our time.

This is important because omissions by pharma are in the news at present so let’s hope this is not a repeat case.

A report in the  Telegraph says

“Medical experts were “complicit” in allowing thousands of children to suffer deformity after resisting warnings on epilepsy drugs, campaigners have said.

“A hearing in London heard that regulators knew in 1973 that taking the anti-epilepsy drug in pregnancy could cause babies to be born with disabilities, but waited 40 years before alerting the public to the risks”.  (The regulators have the data to see that there could be an issue of neutralization with alemtuzumab..if they had any immunological knowledge)

“Estimates suggest that around 20,000 babies in the UK suffered harm as a result of sodium valproate which can also cause brain damage and problems such as autism”.

“Sanofi, which manufactures the drug, has said it has always been transparent with regulators about the risks of the medicine”.

I think this apparent ignorance of the knowledge is rather odd, because when I have been teaching epilepsy since 2006 to our second year medical student’s, one of the central topics in the course notes that is covered is the use of these types of agent during pregnancy and the risks of birth defects.

Why is this interesting to MS?

It shows the importance of disclosure and importantly…. dissemination of problems.

In the telegraph article Medical Experts seem to have been suppressing the information flow.

In addition this interesting to me because our potential MS drug acts on the opposite side of neurological control (to promote relaxation/inhibition) to agents like valproic acid (blocks excitation). If blocking excitation causes autism. Will our drug inhibit autism and epilepsy?

We will have to wait and see.