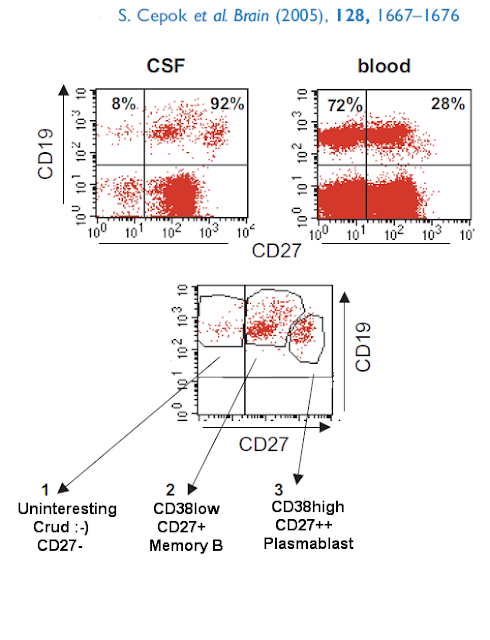 As ProfG has gone AWOL today I post this,

I was reading a paper by a student and they had some references that I was not aware of one by the Cambridge group talking about the lymphocyte phenotyping data from the MS CARE studies and another about plasmablasts.

I was getting ready to make blog post apology, because I had said the data was unpublished in our paper, but then I found out that the Cambridge report was a meetings abstract not a publication. So they had not published the data.Just like we are still missing data from the trial where the thymus is stimulated:-(

So I remain unrepentant about publishing the data and will not make the apology for exposing an issue that should have been exposed years ago…..namely neutralizing antibodies occur after alemtuzumab and that they……can be a problem for alemtuzumab.

It of course obvious as any protein can cause neutralizing antibodies to form. However it is the scale of the occurrence that is unusual. Had they been mentioned years ago it would be a non issue

However, now we will see a number of papers appear about them.

We can already see examples at ECTRIMS based on the programme….but in hindsight have we been told about this for years.

CAMPATH-1H was the first humanised antibody and was designed to inhibit anti-globulin responses and did this to some extent, but it looks like it was the worse in class, as we can see about 80% of people treated with alemtuzumab make neutralizing antibodies.

Cambridge examined ways to get rid of the binding antibodies.

Why do this unless you know about the issues they cause.

Next why choose the dosing schedule that was done…two doses a year apart and if you fail you have to wait to the end of the year to be redosed.

Was it the neutralizing antibodies that drove this schedule?

Why because by the time the third dose comes along 30% of people will have pre-existing antibodies ready to stop the next dose of alemtuzumab working compared to less than 1% before the second cycle.

Of those 30% the titre (amount of antibody) of the antibody will be too low to do this, for most I suspect, but treatment failures were not mentioned in the literature. Anaphylactoid responses have not been mentioned. Do they occur as about 75% of people have binding antibodies 12 months after the second cycle. How common is this issue. I have asked numerous times.

Do you have to wait to the end of the year before the the next dose, because if you did it as disease reactivates there would be still neutralizing antibodies in the system waiting to stop the drug working as it takes a long time for them to wane..

Any way, I digress, the paper above caught my eye the take home message does not say memory B cells are the main problem. It say plasma blasts are the problem.  I said I would look at papers that challenge the role of memory B cells.

Plasmablasts are the fore-runner to a plasma cell and making antibody and in this study they saw that plasmablast numbers correlate with antibody secretion.

But does this kill the memory B cell idea?

Not really as the first thing you ask is whether the memory cells are the fore-runner that change into the plasma blasts.

The answer is you cannot say that this is not the sequence.

Next why study the plasmablasts?

Because if you look at the figure above you can see that the memory B cell is the main B cell subset in the spinal fluid (there are more red dots in group 2 than group 3. But because group 3 appeared the cells in group 2 were ignored for the rest of the paper.

So the memory idea is not dead yet.