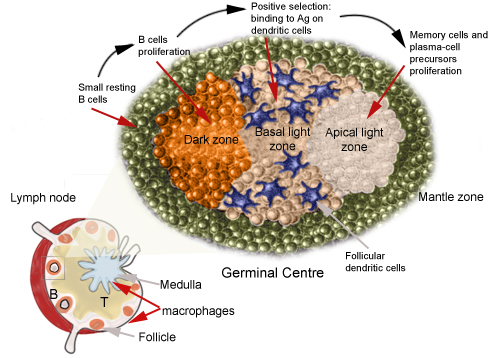 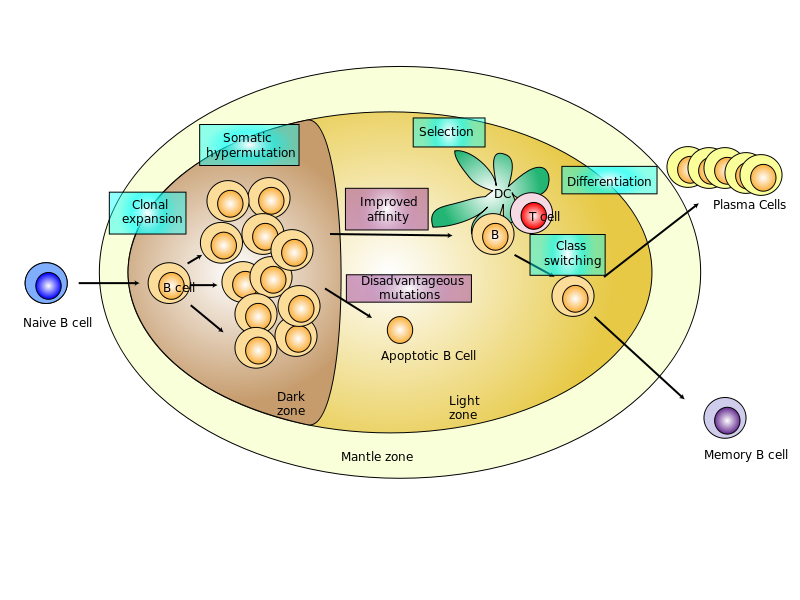 •Single autoreactive B cell clone drives expansion of B cells in germinal centers
• Autoreactive germinal centers composed of B cells become self-sufficient
•Autoreactive and foreign antigen germinal centers evolve clonally at similar rates
•Clonal expansion of B cells in germinal centers underlies epitope spreading
Our findings support that self-reactive Germinal Centres are at the heart of the autoimmune response. The chronic, progressive nature of epitope spreading calls for early interventions, even before disease onset.
Epitope spreading was defined as the diversification of epitopes (antigen detected by the immune system) specificity from the initial focused, dominant epitope-specific immune response to subdominant epitopes on that protein or other proteins that are liberated by damage. This is an idea of how autoimmunity can develop following infection and it could also be involved in the development of relapses. Whilst the concept was about T cells
This phenomenon occurs in MS and in EAE and so the number of autoimmune cells expand over time. However, some scientists have taken this one step too far to suggest that relapses are due to responses to new epitopes  that develop in a sequential fashion. This idea is fately flawed…..because it does not fit the majority of data, and in MS lesions are comming and going all the time. That a T cell receptor transgenic animal capable of responding to a single epitope, relapses says enough….end-of.

In light of the failure of CD40L blockade in humans, alternative GC checkpoints should be explored.
CD40L/CD154 (The protein that binds to (a ligand) the CD40 receptor, as an immune check point that is found on B cells, with the CD40L on activated T cells, such as type of T cell called a follicular T  helper cell, which helps B cells in B cell follicles ) 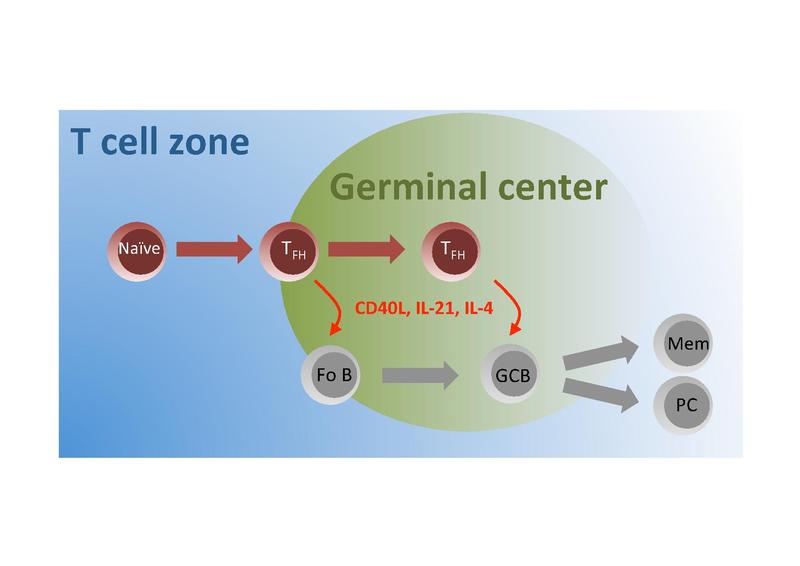 We have focused here on the evolution of the B cell response, but questions remain. Although we demonstrated T cell dependence in our model, the extent and nature of T cell involvement has not been addressed. Future experiments will determine whether the T cell pool is not only necessary, but also sufficient, to sustain and confer autoreactivity.


We conclude that self-reactive B cells are sufficient to break tolerance and induce the formation of autoreactive GCs. We dub this novel tool, which can be used to study epitope spreading and autoreactive GC responses, the “ARTEMIS model” to signify autoreactive B cell driven T-dependent epitope migration toward immunity to self.

Germinal centers (GCs) are the primary sites of clonal B cell expansion and affinity maturation, directing the production of high-affinity antibodies. This response is a central driver of pathogenesis in autoimmune diseases, but the natural history of autoreactive GCs remains unclear. Here, we present a novel mouse model where the presence of a single autoreactive B cell clone drives the Toll-like receptor7-dependent activation, expansion, and differentiation of other autoreactive B cells in spontaneous GCs.  Once tolerance was broken for one self-antigen, autoreactive GCs generated B cells targeting other self-antigens. GCs became independent of the initial clone and evolved toward dominance of individual clonal lineages, indicating affinity maturation. This process produced serum autoantibodies to a breadth of self-antigens. Our data provide insight into the maturation of the self-reactive B cell response, contextualizing the epitope spreading observed in autoimmune disease.