Can the MS Society better communicate the plight of people with more advanced MS? #GuestSpeak

Some of you will have read Patrick’s older blog posts already. The following is his third post in a series about empowering people with more advanced MS to enable them to raise money for the MS Society.

Previous posts in this series:

MS Society. Together we walk

On Sunday, 24 September I went to Battersea Park in London to take part in the MS society walk. I left the house at an 8:45, caught the train to Euston and arrived at the start just after 11. I had hoped to be there earlier. Getting to Battersea Park from Euston station by public transport is not easy.

It was a lovely sunny day The MS society walk started at the bandstand in Battersea Park. Maybe I’m not very good at finding things, I had to ask several people how to get there. By the time I arrived everyone else had started their walk. There was a Zumba session at the beginning which I missed and might have made the day more exciting. I only had myself to blame.

I had never been to Battersea Park before. It was full of people and their children enjoying the sunshine and fresh air. There were people running, walking or cycling on tricycles and bicycles. Many people were wearing smart and possibly expensive exercise outfits. I felt stunningly underdressed but I was on my mobility scooter.

By the time I arrived everyone had set off on their walk. Nonetheless, I was issued with a bright orange MS society T-shirt which I put on, given some water, emergency rations and a map for the 6K walk.

When I reached the end of the walk back at the bandstand I must admit I felt slightly depressed. I saw no signs of the ‘fantastic post-event celebration in Battersea Park’. There was a steel band playing when I arrived but no party atmosphere.

Over 600 people took part that day. I couldn’t help but feel that the wrong message was being given to the public. The message on the T-shirt said ‘let’s stop MS together’. I did not see any interaction between the MS society and the participants with the general public. I saw people finish the walk and leave the park on foot.

The public must assume everyone with MS can walk and does not suffer any physical disability. I asked one of the volunteers at an entrance to Battersea Park how many mobility scooters had they seen that day. They told me they had seen about five.

MS sufferers, their family and friends know how crippling this disease can be. It took me 46 minutes to walk 1 km at the beginning of September. The public at the Battersea Park did not see the real world of MS. I suspect many of the walkers were friends or family of people with MS who were unable to participate.

Why didn’t the society arrange walks of 500 m or 1 km for people like me who are unable to walk and have to use a Rollator? It’s not difficult at Battersea Park, plenty of smooth flat road to walk on. The general public would then see the real world of MS.

I think The MS society should consider arranging their next walk using the facilities provided by Parallel London in the Olympic Park. There are distances from 100 m to 10 K. I’m sure they could have their own tent there. It is completely accessible with good car parking and excellent public transport links. Westfield shopping centre is only a stone’s throw away with shops and plenty of places to eat. 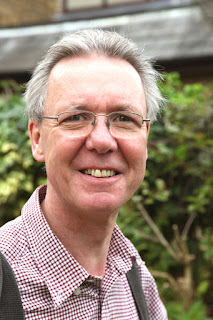 I am Patrick Burke, I was diagnosed with RRMS in 1995 but I believe the symptoms started in 1972.The disease turned into SPMS in about 1999/2000. I took medical retirement in 2012 and set up the website Aid4Disabled in the same year. The website is the story of my MS since retirement and it also identifies a wide range of objects that are readily available and can improve quality of life. I am also a member of the Barts MS Advisory Group.