How would I describe this year’s ECTRIMS/ACTRIMS?

With 10,000 participants and more than 2000 abstracts this year, it is undoubtedly one of the worlds largest neurology/science conferences. On Twitter, alone @ECTRIMS reached a total audience of 2.9 million, with 6.2 million impressions worldwide (stats from @ECTRIMS). Walking along the halls of Le Palais des Congres de Paris (venue), I felt a sense of awe and wonder. With the conference now over, the keynote messages will soon move from memory to history; immortalized in reports, seminars, blogs and tweets the world over.

Every year there are a vast number of posters to review, and this year was no different. They were of a very high quality this year, each adding more to our knowledge and our understanding of MS than ever before. Below, I have tried to pick out some of the quirky ones for you!!!

Does it truly exist?; defined as those with an expanded disability status scale (EDSS) of  <3 from symptom onset after 10, 15 or 20y.

Of 485 PwMS evaluated in 1996, 82 were felt to be benign. At 2006 (taking into account those lost to follow-up) 62 PwMS were evaluated of which 51 had benign MS. They found that for every 10y of MS evolution, a reduction of 20% of patients with benign MS was detected.

Trauma has been hypothesised to initiate MS -related autoimmune processes, through proliferation of myelin-antigen-specific T cells (evidence from experimental works). 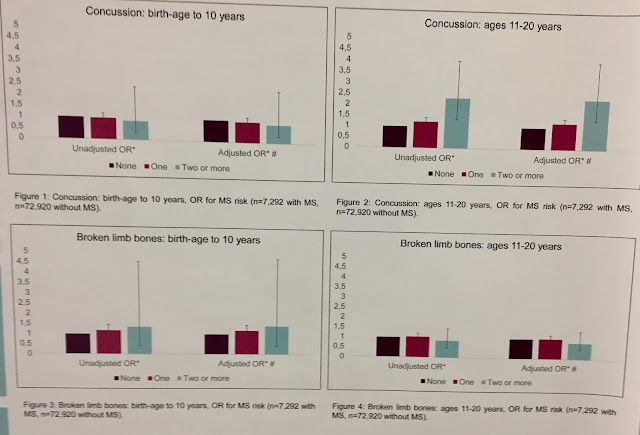 Prevalence of psychiatric comorbidities (anxiety, depression, bipolar disorder) is higher than expected in MS, but little is known of their incidence before diagnosis.

Between years of 1989-2012 all PwMS in Manitoba matched to a cohort from the general population.  They found that the incidence of psychiatric disorders was higher in MS than controls pre-diagnosis (depression relative risk [RR] 1.18, anxiety RR 1.09, bipolar RR 1.16). The occurrence of this is found as early as 5y before MS diagnosis (see Figure). They suggest that there may be a prodromal period for MS in which inflammation has developed sufficiently to precipitate psychiatric disorders but not the clinical symptoms of MS. 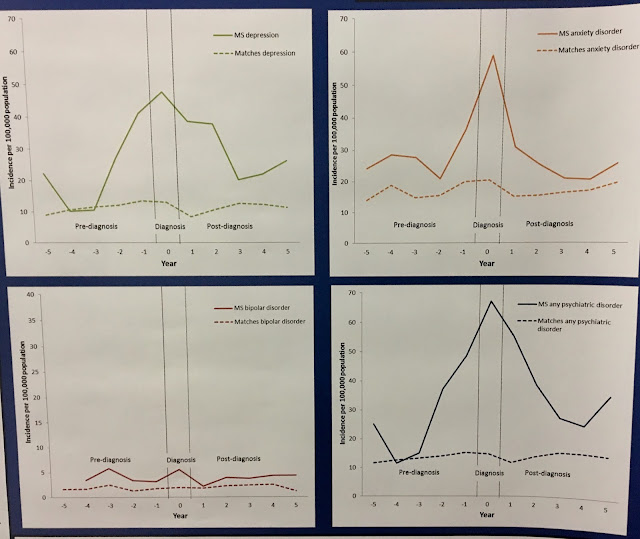 Obesity in young women has been associated with an increased risk of MS, but little is known about the prognosis.

They studied the possible association between perceived body size at menarche (underweight, normal or overweight) with the age at CIS (first demyelinating event) and the following outcomes: time to second attack (i.e. MS diagnosis) and time to EDSS 3. 518 women completed the survey and 5.6% were overweight at menarche. This was associated with a younger age at CIS, and there was a trend towards higher risk of disability accrual, although this needs to be confirmed in future studies.

The impact of menopause on the MS disease course is unknown, although it has been noted previously in PwMS after menopause there was faster disability progression and worsening MS symptoms in studies.

They looked at 34 women aged 45-55, post-menopausal, with a diagnosis of MS at least 2y before menopause. Only annualized relapse rate seemed to be influenced by menopause, and the effect was favourable, with a decrease in the number of relapses. After menopause, the disability increase (i.e. the rate of EDSS change) was comparable to the pre-menopausal period. Of course, these findings need to be confirmed in larger prospective studies.

Women with MS are at an increased risk of relapses in the postpartum period. There is little data available about the concentrations of IV MP in breast milk and exposure to infants as a result. The study looks at this in 21 breastfeeding MS women. They found that the concentration of MP transferred into the breast milk was small and the infant exposure would be very low for a breastfeeding mother an hour after infusion. Mothers can choose to wait 2 to 4h to limit further exposure (see figure). 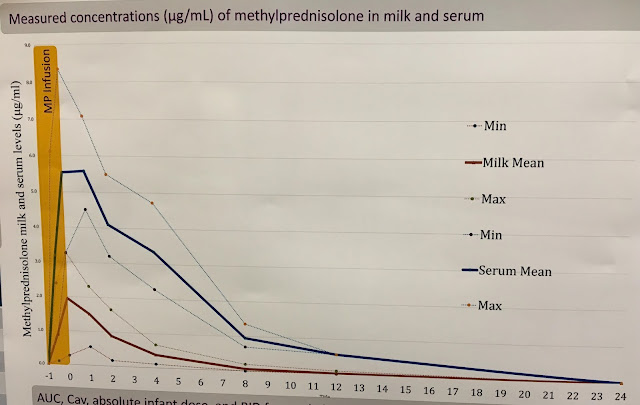 Immunosuppressants are becoming very relevant to paediatric MS, and therefore it is important to understand JCV prevalence in this population.

Using the Stratify-JCV test they studied JCV seropositivity in 106 diagnosed with MS/CIS and other neurological conditions (controls) in the paediatric population. They found that the percentage of JCV-seropositive in MS as well as controls was comparable (~ 50.9%) to that seen in adults. Therefore, JCV status may influence the choice of DMTs in this group.

Little is known about the management of highly active paediatric cases of MS. 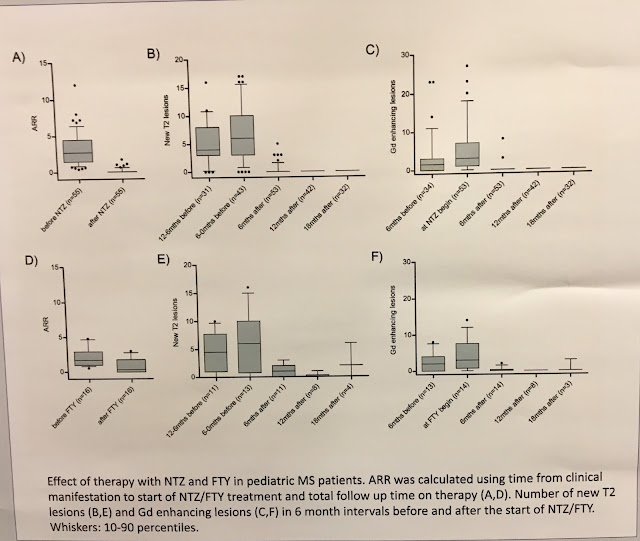