Multiple sclerosis (MS) is the leading cause of chronic neurological disability in young adults. The clinical disease course of MS varies greatly between individuals, with some patients progressing much more rapidly than others, making prognosis almost impossible. We previously discovered that cytotoxic CD4+ T cells (CD4+ CTL), identified by the loss of CD28, are able to migrate to sites of inflammation and that they contribute to tissue damage. Furthermore, in an animal model for MS, we showed that these cells are correlated with inflammation, demyelination, and disability. Therefore, we hypothesize that CD4+ CTL drive progression of MS and have prognostic value. To support this hypothesis, we investigated whether CD4+ CTL are correlated with worse clinical outcome and evaluated the prognostic value of these cells in MS. To this end, the percentage of CD4+CD28null T cells was measured in the blood of 176 patients with relapsing-remitting MS (=baseline). Multimodal evoked potentials (EP) combining information on motoric, visual, and somatosensoric EP, as well as Kurtzke expanded disability status scale (EDSS) were used as outcome measurements at baseline and after 3 and 5 years. The baseline CD4+CD28null T cell percentage is associated with EP (P = 0.003, R2 = 0.28), indicating a link between these cells and disease severity. In addition, the baseline CD4+CD28null T cell percentage has a prognostic value since it is associated with EP after 3 years (P = 0.005, R2 = 0.29) and with EP and EDSS after 5 years (P = 0.008, R2 = 0.42 and P = 0.003, R2 = 0.27). To the best of our knowledge, this study provides the first direct link between the presence of CD4+ CTL and MS disease severity, as well as its prognostic value. Therefore, we further elaborate on two important research perspectives: 1° investigating strategies to block or reverse pathways in the formation of these cells resulting in new treatments that slow down MS disease progression, 2° including immunophenotyping in prediction modeling studies to aim for personalized medicine. 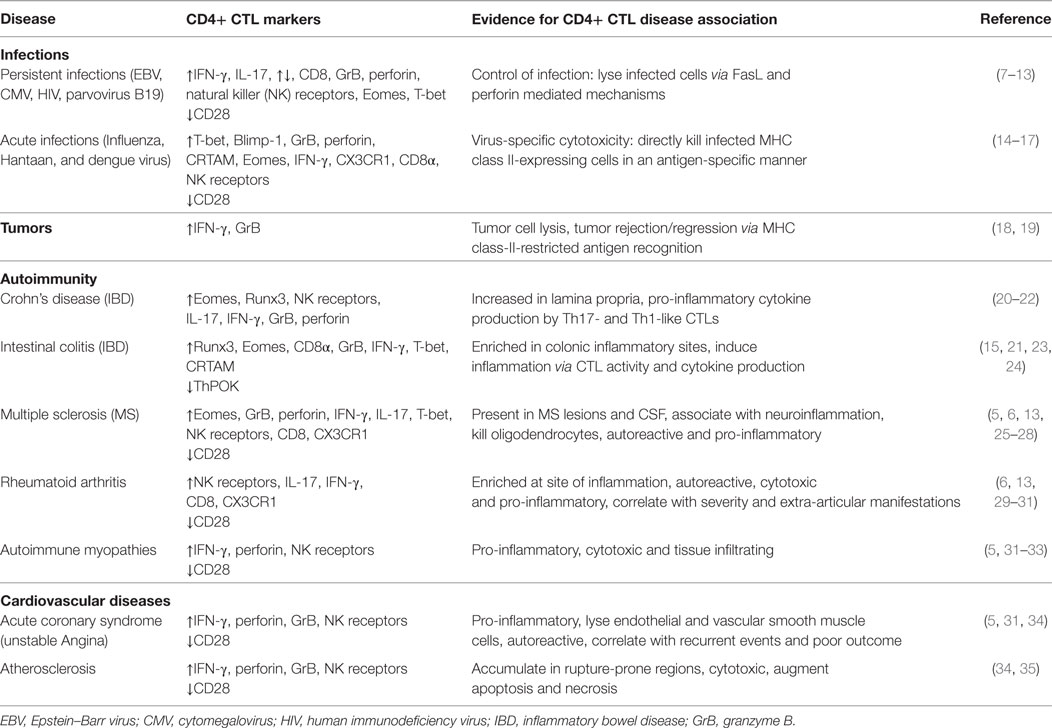 Yesterday, we had yet another post on the memory B cells and we had some cracking questions., some of which I could only give a “I don’t really know yet” answer but we have been asking the same questions….but the answers need a bit more thought and a lot more reading.

But we need to ask questions and there is a killer punch we need to kill the idea and reformulate it we find the idea is wrong.

We need to listen to alternatives and here is another one. This study suggests that MS is cause by CD4 T cell that are killing machines and that they too occur in loads of different diseases.

You can read the paper as it is open access. They are expanded CD4+CD28null T cells are found in about 20% of both pwMS as well as healthy controls without obvious differences in numbers.

They are suggested to that these cells link to progression.

I would counter this by saying:

(a)  CD4 T cell depletion does not stop progression at least quickly
(b) CD4 deletion does not work in MS
(c) Histologically  there are few CD4 T cells in lesions, there are few in the nervous tissue
(d) Oligodendrocytes do not express MHC classs II, which is a recognition element targeted by CD4 T cells
(e) Then we ask does the data  pass the “smack you in the eye test” and are the R2 values big enough, to me it says the effects cannot be explained by the CD4 T cells.

They do address the issue of CD4 monoclonal antibody and  intimate that the level of depletion wasn’t big enough. We have also suggested that it may have been on the brink of not being enough based on animal studies, but alemtuzumab knocks CD4 and CD8 cells to pieces and this does not stop advanced MS. So the argument probably falls.