Join us today for the Burning Debate at ECTRIMS 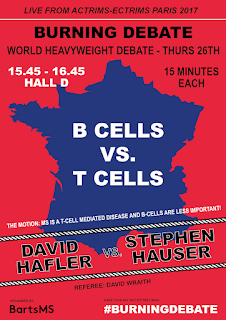 The aim of the Burning Debate is to get two top researchers to discuss a burning topic from the field of MS Research. This year the topic is: Rumble in the Jungle: B cells vs. T cells. Our two speakers will argue over whether MS is a T-cell mediated disease and if B-cells are therefore less important.

The debate will take place on Thursday 26th October from 3.45-4.45pm in Hall D. For folks in the UK, we will be tweeting from the debate athe 2:45pm

We have Dr David Hafler arguing FOR the motion and Dr Stephen Hauser arguing AGAINST. The debate will be chaired by Dr David Wraith. Unfortunately the debate will not be live streamed, but we will be covering it on Twitter where you can follow the discussion by searching for the hashtag #burningdebate. A twitter feed will be projected in the debate room, so any comments or questions will be voiced.

At the end of the debate, the BartsMSblog twitter account will post two tweets, one FOR the motion, one AGAINST. The tweet that is re-tweeted the most will win the debate. A secondary aim of the debate is to encourage clinicians to use Twitter in their professional capacity.